I receive a lot of questions from shotgun owners which want to add a heat shield (barrel shroud) to a shotgun. So, this review will describe available options and how to choose the best heat shield for the Remington 870.

Sage International Shotgun Barrel/Magazine Clamp (Battleclamp) has a very nice smooth design with rounded edges. It stabilizes the magazine extension by clamping it to the barrel. That way, you will not damage the extension if you hit something with it. The Sage International clamp fits Remington 870, 1100, 11-87 and Benelli M1, M2, M4, M1014, 12 gauge shotguns.

The TacStar Barrel/Magazine Clamp is for those who like simple solutions. This clamp is the most affordable on the market. It serves the same purpose as other shotgun barrel/magazine clamps – to hold and stabilize the magazine extension.

The Mesa Tactical Magazine/Barrel Clamp for tactical shotguns is a two-piece clamp made of 6061-T6 aluminum which is lightweight and sturdy. The Mil-spec Type 3 hardcoat is anodized to withstand hard use.

Now you can download and install FREE Remington Serial/Barrel Number Lookup on your Android device:

How to Find out if Remington Model 870 Shotgun has a Magnum Receiver?

You are probably familiar with how Remington 870 shotguns are made with different gauges. The most common gauge in the model 870 is the 12-gauge. This measures the diameter of the barrel. But what you may not realize is the length of the shells is also as critical to consider as their diameter. If you have 3 inches or 2 ¾ inches shells then you need a magnum receiver that can handle it. Of course, the barrel also has to be equipped to handle up to 3-inch long shells. If it is then you can fire them as long as you have a magnum receiver.

Glock handguns are semi-automatic pistols with polymer frames, which are plastic frames. This makes them light weight and easy to carry around. They also have short recoil when you shoot them, which means they are easier to aim for better accuracy. Since it is semi-automatic, that means the gun will fire a round each time you pull the trigger. That way you don’t have to worry about cocking back a hammer or anything like that. You just repeatedly pull the trigger if you want to fire multiple rounds. When you combine this convenience with all the other aspects of the weapon, it explains why the Glock is a favorite amongst pistol lovers.

The two most common Remington 870 barrels are either the rifled barrel or the smoothbore. Rifled barrels are good for shooting sabot slugs like Premier Accutip Slug, Copper Solid Slug etc. These are the kind of barrels you would use if you are aiming to kill someone or something on a longer distance. Perhaps you want to looking to kill a big predator in the woods. These barrels help you have more stability and accuracy with your shots in order to do this kind of damage. If you are looking for a long range shotgun then rifled barrels would be your best option as well. As for smoothbore barrels, these are more suitable for rifled slugs, birdshot and buckshot. In other words, if you are looking to hunt small ducks or birds hen you would be better off using smoothbore.

“I just bought my first 870 (I came over from the also excellent Winnie 1300) and ended up getting the basic Tactical. I ordered a Rem slug barrel online – 20″ smoothbore -and I just dropped it in.

An issue: the barrel is fully seated but does not ‘lock’ in, i.e. I can manually disengage the barrel from the receiver quite easily. This seems… problematic.

The 18.5 tactical barrel I just took off of it has a belted groove near the receiver end that seats in the receiver that the slug barrel lacks, as well as a shallower slot opposite the receiver’s opening. Is this what is causing the slide-out?” 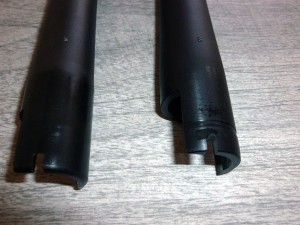 “What it looks like is that the barrel ring on the tactical barrel is what holds the barrel on by its tight proximity to the mag cap (extended mag). Since the slug barrel’s ring is farther down the barrel, and therefore not in contact with the mag cap, then there’s naught to hold the barrel into the receiver.” 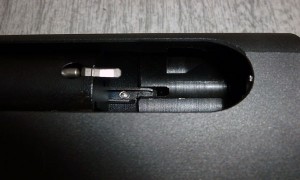 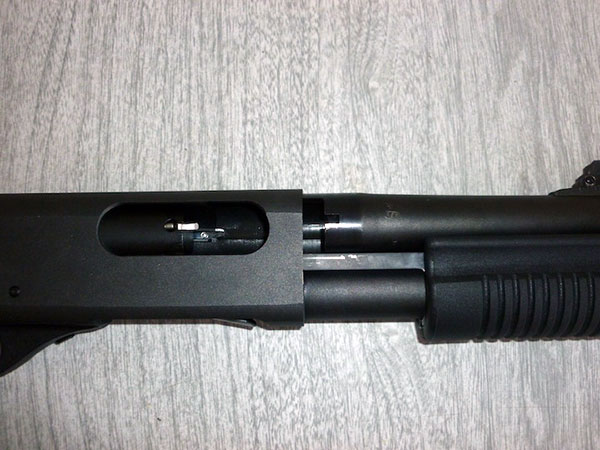 Later, he has found solution to this problem:

“I just learned this about the 870 Tactical: “Due to the location of the barrel ring on this model you can not change to other Remington Barrels as this is the only one made for this weapon.”