Marlin Firearms Company was founded in 1870, 152 years ago when this article was written (2022). John Marlin founded Marlin Firearms in the 1870s. Marlin developed a wide range of weapons, including single shot rifles, pump action shotguns, and lever action rifles. Marlin was viewed as Winchester’s primary competitor.

The Marlin Firearms logo features a slim horseman, braced at a sudden stop with his horse, looking intently out to the side. He is wearing a red bandana around his neck and a felt hat on his head. A shot be delivered to the invisible threat by the Marlin levergun, which is held in hands and ready to be fired right away. It depicts a man who is self-reliant and independent.

American company Marlin Firearms Co. produces bolt-action, lever-action, and semi-automatic rifles. The firm was situated in Madison, North Carolina, and produced shotguns, derringers, and revolvers in the past (formerly based in North Haven, Connecticut). H&R Firearms, a gun manufacturer, belonged to Marlin. Marlin Firearms was purchased by Remington Arms, a division of the Remington Outdoor Company, in 2007. At its production plants in Kentucky and New York, Remington produced weapons under the Marlin name. Sturm, Ruger & Co. acquired the business in 2020 from the bankrupt Remington Outdoor Company.

In the year 1836, John Mahlon Marlin was born in Connecticut. He began making weapons during the Civil War, working at the Hartford Colt plant. He went it alone and established the Marlin Firearms Company in New Haven, Connecticut, in 1870. He first produced.22 rimfire single-shot brass-framed derringers before expanding his product line to include.32 and.38 rimfire derringers. Marlin began producing the single-shot Ballard guns in 1875, expanding his product line to include rifles. 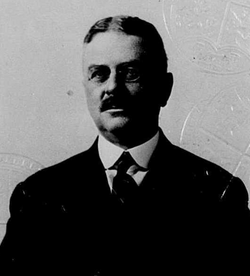 For a century, Marlin Firearms toiled away as a small-time manufacturer of leverguns for Winchester (formerly of New Haven). However, Marlin started to outperform its former opponent in the 1980s and 1990s. In North America, it currently has a monopoly on the sale of lever-action rifles. Its side ejection design enables flat-topped weapons, which makes installing scopes simpler than with conventional Winchesters. As American shooters started to rely more and more on optics, this helped Marlin increase its market share. Marlins may employ more powerful cartridges like the.45-70 because they are bigger, stronger, and heavier than the majority of equivalent Winchester models.

When Marlin launched the Model 1889, the first levergun to have a solid top and eject the empties out of the side of the receiver rather than the top, a Marlin “trademark” was created (like Winchester leverguns). The fact that these new weapons didn’t throw hot brass in their faces was appreciated by 19th century levergunners, even though they had little interest in placing sights on their rifles. The popular pistol cartridges of the time, including.44-40,.38-40,.32-20, and.25-20, were chambered for the 1889. This gun would later inspire the Model 1894, which Marlin still produces today.

Marlin Company underwent a turbulent series of ownership transitions. When John Marlin passed away in 1901, his two sons received the company as a portion of his estate. When John Barlow left his position as President of the company of the Ideal Reloading Tool Company in 1910, Marlin acquired Ideal, the company that produced the renowned Ideal bullet moulds. When Marlin sold the Ideal Reloading Tool Company to Phineas Talcott, who eventually sold it to Lyman, a consortium of investors (William Bonbright & Co. and Kissell-Kinnicut & Co., both connected to J. P. Morgan) acquired the Marlin Company in 1915. As president of the newly formed Marlin Arms Corporation, A. F. Rockwell changed the company’s name to Marlin Rockwell Corporation in 1916, and it went on to become one of the biggest machine gun manufacturers in the world.

The Marlin Rifles Corporation was established in 1921 with a greatly reduced product portfolio that was solely devoted to sports firearms. The business declared bankruptcy and entered foreclosure in 1922. The business was put up for auction in 1924. Mr. Frank Kenna won the auction with a $100 bid. Additionally, he received the $100,000 debt that came with them. Kenna put the company back on solid ground and brought back a number of the well-liked firearms from before the War. Since that time, the Kenna family has owned the Marlin Firearms Company.

The Model 36 underwent a small makeover in 1949 and was reintroduced as the now-famous Model 336, which Marlin continues to produce today. A round-stock bolt and an upgraded extractor stamped from spring steel were features of the 336. Instead of having a single large slot cut all the way through, the receiver was milled with a window on the side for ejection and a round window in the back for bolt travel, leaving the rear sidewall of the receiver intact. This made the receiver block feel a little more substantial and robust.

The Model 36 underwent a small makeover in 1949 and was reintroduced as the now-famous Model 336, which Marlin continues to produce today. A round-stock bolt and an upgraded extractor stamped from spring steel were features of the 336. Instead of having a single large slot cut all the way through, the receiver was milled with a window on the side for ejection and a round window in the back for bolt travel, leaving the rear sidewall of the receiver intact. This made the receiver block feel a little more substantial and robust.

Marlin released a new rifle based on their 336 action in 1972–1973 that was chambered for the.45–70 Government cartridge. The Model 1895 is the name of this firearm. Hunting big wildlife in dense woods was a popular activity for hunters who used this new.45-70 levergun.

To make gun safer, Marlin equipped its leverguns with a cross-bolt safety starting in 1983.

Marlin Firearms company made 26 million guns and they are still really popular.

The Marlin Model 795 is a semi-automatic.22 LR rifle made in the United States by Ruger, previously Remington Arms. The most notable characteristics are micro-groove barrel, cross-bolt safety, black synthetic stock, and 10-round nickel-plated box magazine. It is similar to the Marlin 60, with a few minor modifications. 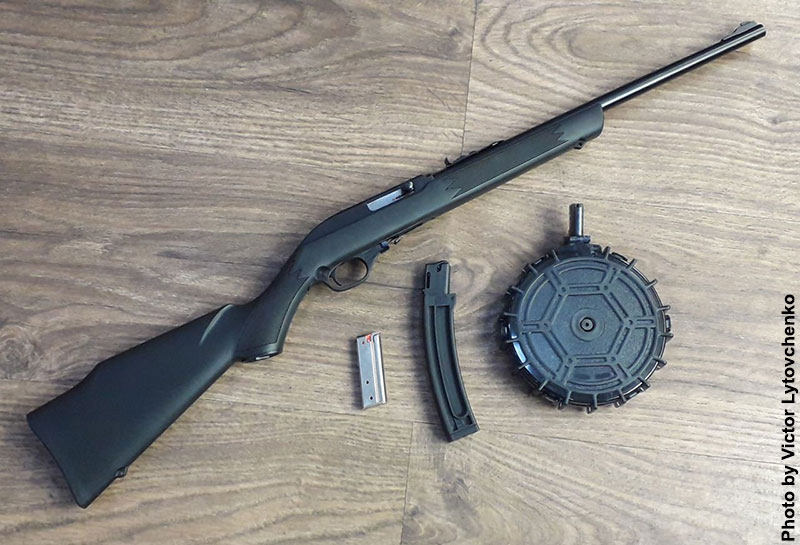 This .22 caliber semi-automatic rifle is incredibly accurate and convenient to use. 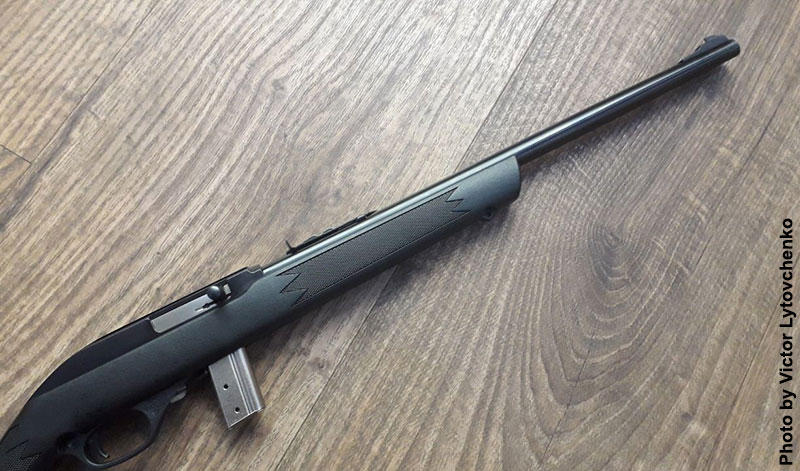 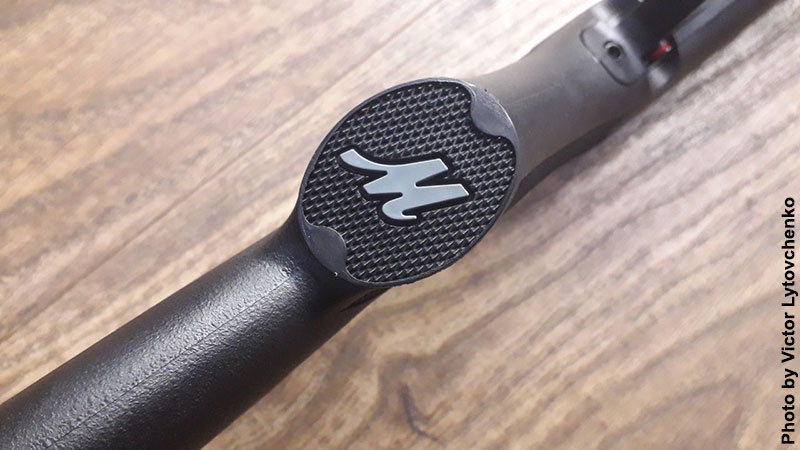 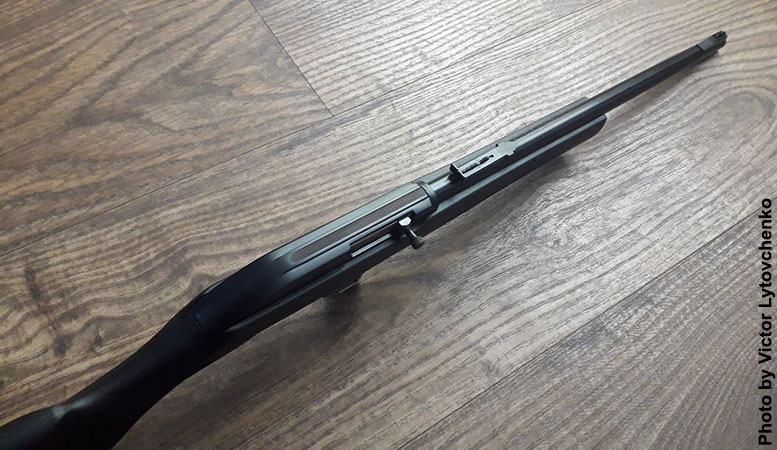 This is a common rimfire rifle. It features an 18″ barrel that is Micro-Grooved, an adjustable open rear sight, and a ramp front sight. Sights are pretty basic and inexpensive. For increased precision, the microgroove rifling has 16 shallow grooves.
The 795’s plastic stock is cheap but lightweight and comfortable. The stock is designed to work with the majority of two-point sling swivels. The stock’s pull length is 13.75″ including a box magazine with ten rounds. Additionally, aftermarket magazines with a 25-round capacity and even a 70-round drum are readily available.
The Marlin 795 has excellent accuracy, dependability, and reliability. The dual extractor is quite effective and consistently removes used cases, regardless of how dirty the chamber or magazine may be.
Nickel-plated magazines help prevent rust and feed the 22LR ammunition reliably. The Marlin 795 is an excellent choice because it is simple to handle and control. The last shot locks the bolts back and holds the action open. The automatic bolt catch function on the Marlin Model 795 is beneficial.
The Marlin 795 has an 18″ blued barrel and measures 37″ overall. The full-sized rimfire rifle only weighs 4.5 lbs.
This popular budget rifle can be purchased for under $150.

The Best Upgrades for Marlin Model 795

Let’s see how we can improve this budget rimfire rifle. I want to start with the sights, and they are too cheap and simple for effective and comfortable use.

Easier to see, easier to aim, easier to hit a target! Simply the best upgrade you can get for your Marlin rifle because you use sights every time you shoot. The fiber optic light-gathering sight enables you to shoot even in low light conditions. Superior to the stock front sight in terms of visibility.

The installation process is quick and easy. Use Loctite so that it won’t move during shooting. A well-made, extremely durable sights. 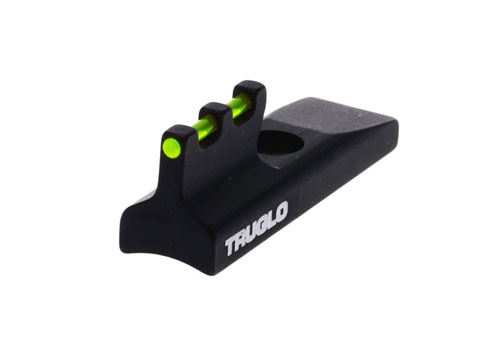 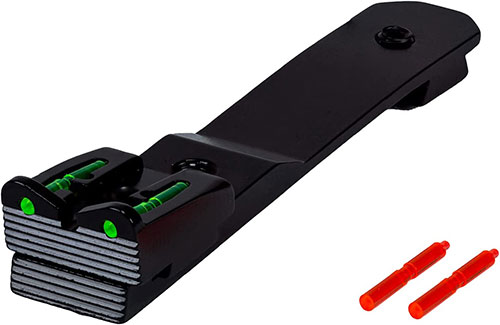 This stock is lightweight and has additional features. Folding stock makes transportation and storage more convenient. 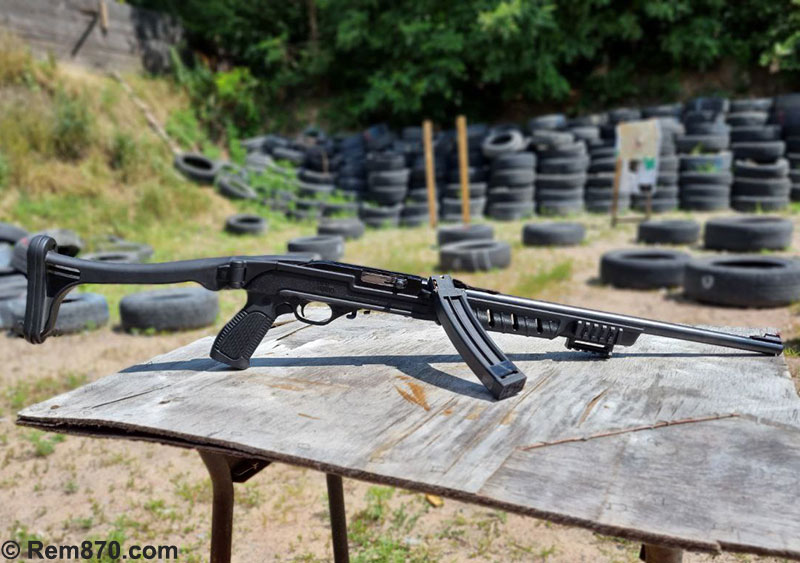 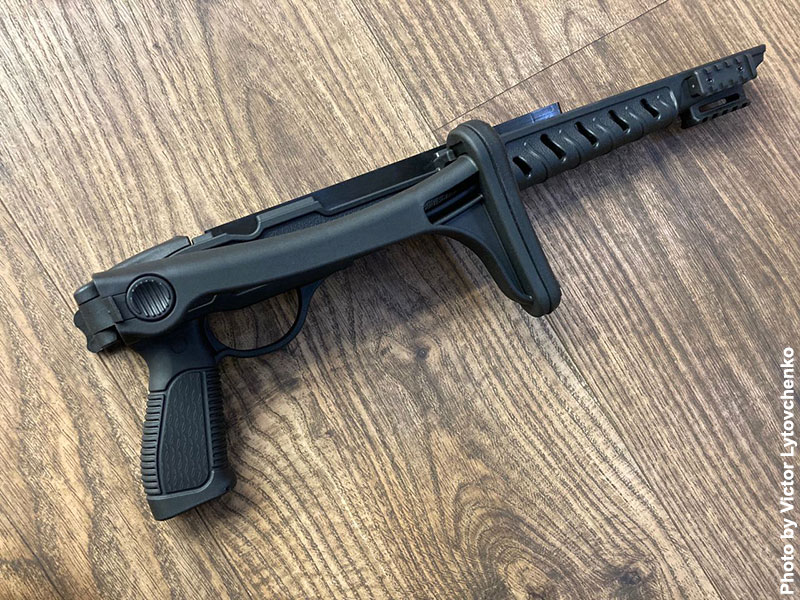 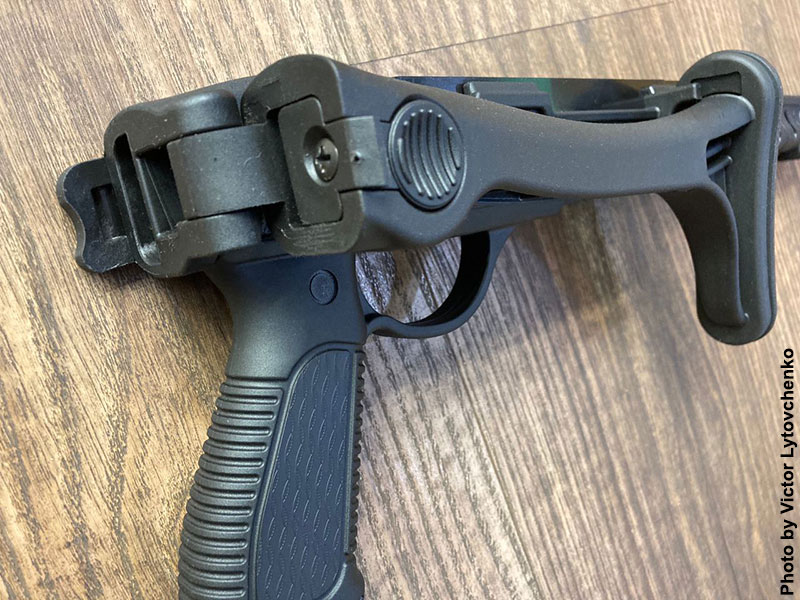 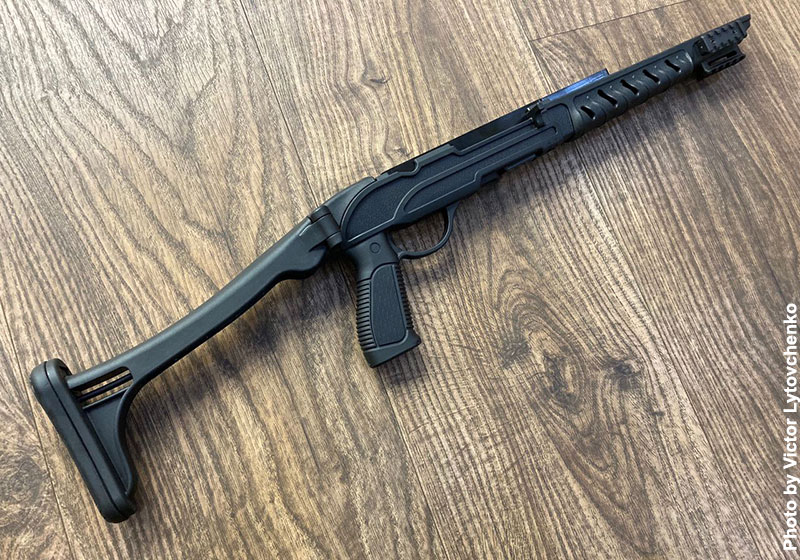 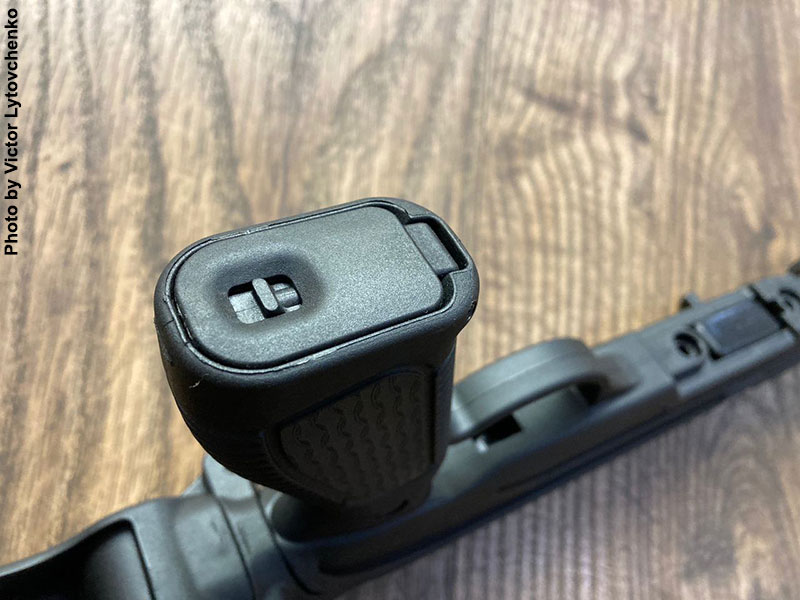 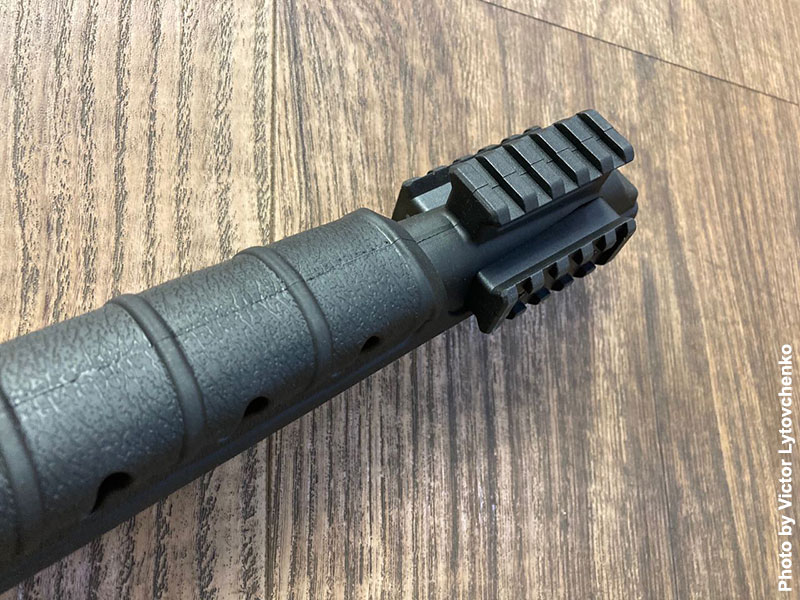 Before using it, watch the how-to video- 3D-printed in the USA with a robust polymer material.
You can spend more time shooting and less time loading magazines with the aid of this speedloader.
It’s a small, inexpensive, and handy tool. Recommended.

Are you looking for a rail mount to attach a red dot sight or a scope on a Marlin 60 (795 dovetail)? The 3/8″ dovetail rail’s picatinny/weaver adapter must be installed first. Alternatively, you can install a scope mount directly on the 795 dovetails.

This affordable adapter and scope rings enable owners to install any scope. UTG is a company that manufactures inexpensive but high-quality gun upgrades and accessories. 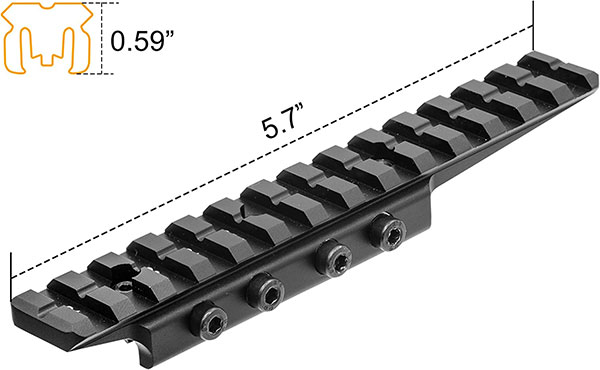 The description says Airgun Mount, but it will work on a rimfire rifle. Such mounts are considered sturdier and more reliable than scope rings. 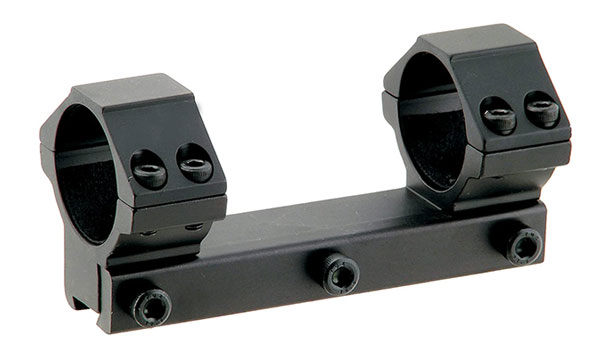 Equipped with a reversible locking plate to match the entire range of airgun/.22 rails

This kit includes Compact 4×30 Rifle Scope + Scope Rings + Adapter Mount. This kit is suitable for beginners, but with that price, don’t expect much from it. You get what you pay for. 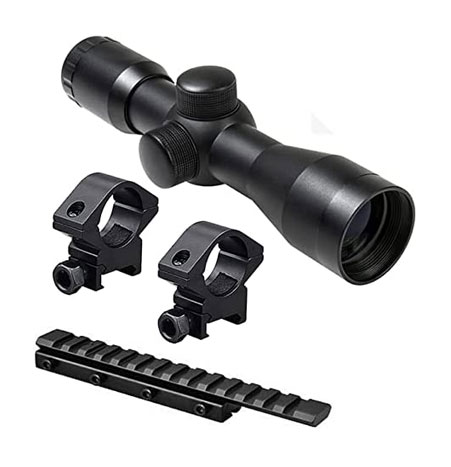 Simmons 3-9x32mm scope is a trendy choice for 22lr rifles. It is affordable and works pretty well. There are hundreds of happy owners of this scope.
With the included rings, mounting the scope was simple. They are cheap, but you can get better ones if you want. The scope is well made, and it is clear.

Zeroing is simple too. Zoom and adjustment knobs are smooth and easy to turn. However, the adjustment knob might have used a slightly louder “click.”
Quality, light transmission, and materials are suitable for the scope of this price. The glass’s clarity and eye relief are fantastic at the lowest setting. However, the crosshairs become blurry and lose sharpness at the highest magnification.
Outstanding cost-performance ratio. I would spend the money again if I required a new scope for a.22LR intended for plinking, hunting, and varmint control.