The 3rd Shotgun World Shoot will be held in France in the year 2018. My friend Norbert Papon from France asked me a lot of questions because interest to shotguns grows in France. They are certainly experienced shooters when it comes to rifles and handguns, but shotguns are something new to them. That is why I decided to write a series of articles about shotguns in IPSC.

First of all, I think that shotgun shooting matches are the most fun and the most spectacular competitions around. Targets on birdshot stages are usually very close, the shots are very powerful and you can see clouds of dust and metal plates traveling long distances through the air. It is fun to shoot such powerful firearms.

So, what are shotgun divisions in IPSC? You can choose from one of the following:
-Standard
-Standard-Manual
-Open
-Modified

Each division has specialties which make them interesting. All of them are fun to shoot in but they are very different. 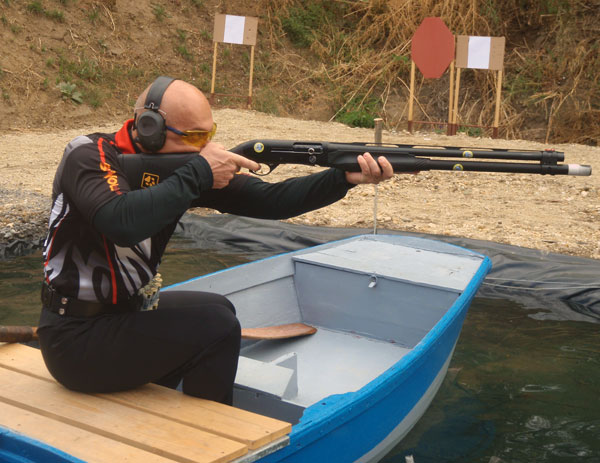 The Standard division gathers shooters who have semi-automatic shotguns with tubular magazines. This is one of the most popular divisions and it usually has more shooters than any other division.
Shotguns are semi-automatic which means that you don’t need to do manual actions to prepare your shotgun for the next shot. Shotguns use recoil or gasses to eject a fired shell and feed the next round from the magazine tube into the chamber.

This means that shooters from the Standard division usually shoot faster than shooters from the Standard-Manual division, for example. But this also means that semi-auto shotguns are more prone to malfunctions caused by the ammo, oil, weather or condition of the shotgun. That is why you need to thoroughly and regularly clean/lube your shotgun with good gun oil. Inertia based shotguns are easier to clean because they don’t have gas pistons which become very dirty.

Semi-auto shotguns are very ammo-sensitive. This means that you need to find the ammo that best suits your shotgun. The ammo needs to have enough energy to reload your shotgun. That is why light loads like 24-26 grams are hard to cycle in your shotgun. It is extremely important to test shoot at least 50-100 rounds to be sure of the selected type of ammo.

Two of the most popular and reliable shotguns in the Standard division are the inertia-based Benelli M2 and gas operated Beretta 1301 Comp. There are a lot of other shotguns that can be used for practical shotgun shooting but those two are absolute leaders.

The Standard shotgun division allows for having 9 rounds on the start, so the overall magazine capacity is not limited.

Shooters in this division are very fast but it takes a lot of time to have both the speed and accuracy that are necessary. 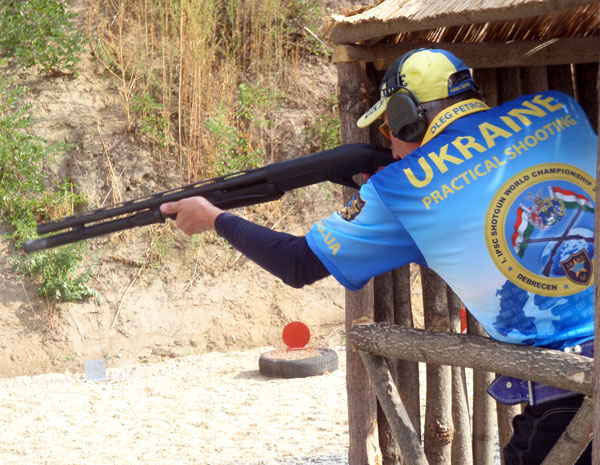 The Standard-Manual division is for those who like pump-action shotguns. This division is believed to be more difficult because you are not just pulling the trigger but you also need to cycle the action with your other hand. Such shotguns need to be manually “pumped” after each shot. This means that they are more reliable because you reload them manually and they don’t depend on ammo.

But malfunctions are also possible, especially with new shooters. There is a common problem called “short stroking” a shotgun, which is when you don’t pull the forend completely to the rear and then push it forward before the next round is fed out of the magazine tube into the carrier. This causes you to have an empty chamber and you can hear just a “click” when you pull the trigger. Then you need to cycle the shotgun again to have next round.
Experienced shooters in this division have almost the same speed as shooters in the Standard division but it takes years of training and thousands of rounds to master the pump-action shotgun.

The Standard-Manual shotgun division allows for having 9 rounds at the start, but the magazine capacity is not limited.

The most popular shotgun of the top shooters is Benelli Supernova. It has a wide loading port and good reliability which makes it the choice of most of the top shooters. Some other shotguns used are the Remington 870, Mossberg 500 and Winchester 1300. 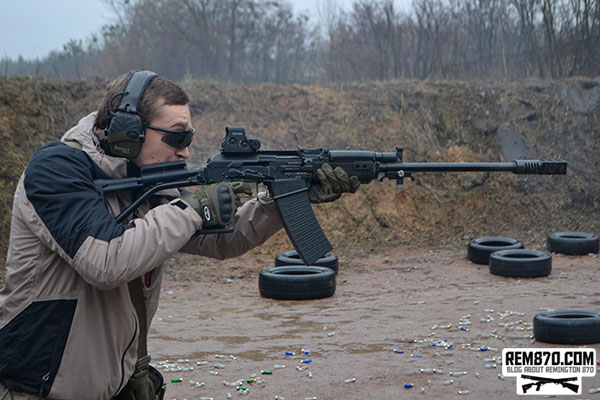 Open division is for those who don’t like to load but like to shoot. This is the fastest division because shotguns can be equipped with muzzle brakes which greatly reduce any recoil that is felt. Also, reloads are performed like on rifles using magazines. You just remove the empty magazine and attach the full one. The capacity of the magazines is limited to 12 rounds but you can have just 10 rounds loaded on start.

Electronic sights such as holographic/red dot sights are allowed. The most widely used sights are Aimpoint and Eotech. But shooters use red dot sights of other manufacturers as well such as Leupold, Docter, C-More, Trijicon etc.

From my experience, these are shotguns that have more malfunctions than any other type of shotgun. Plastic hull is not designed to be used in magazines. You need to tune and upgrade your shotgun to be 100% sure in it.
The most popular shotguns in Open division are the Russian Vepr-12 and Saiga-12. They are used by most of the shooters. The Vepr-12 is more popular because it is more reliable and has more accessories and upgrades available. But Kalashnikov released the Saiga 340 which is also reliable and can compete with the Vepr-12. There was a time when shotguns with tubular magazines could compete with magazine fed shotguns but I think that they are less effective nowadays.

Open division shotguns are easy to shoot, aim, and reload, but this also makes this division very challenging. You need to be really fast and have advanced skills like shooting on the move.

The Modified division is the least popular division with a small number of competitors. These are tube fed semi-automatic shotguns which have muzzle brakes. It is allowed to have 14 rounds on the start while the overall shotgun length is limited to 1320 mm.

This division is something between Standard and Open divisions. The most popular shotguns in this division are the Benelli M2 with muzzle brakes. 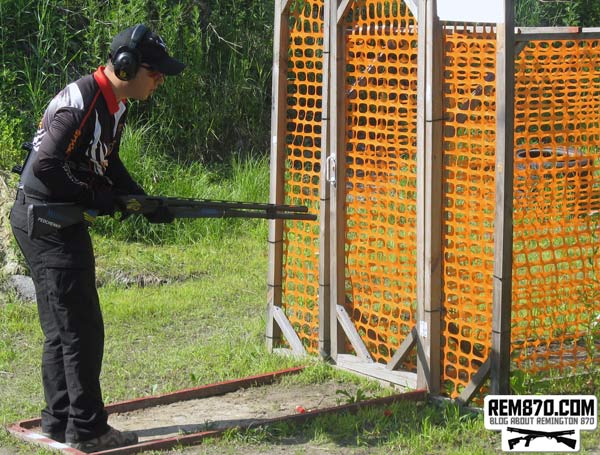 Shooter, are you ready?

There are three start conditions of your shotgun in practical shooting. They are called ready conditions:

Such information can be found in the official rules, just Google search the term: “IPSC Shotgun Rules.”

Basic Upgrades of Standard and Standard-Manual Shotguns for Practical Shooting 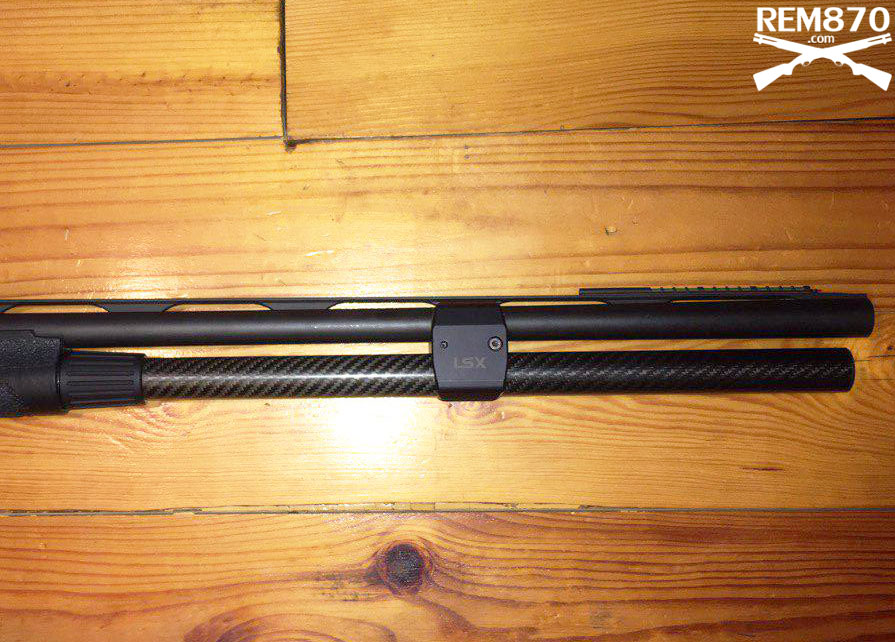 The first thing you need to get is the magazine extension. You need to be able to have 9 rounds in the magazine tube on stages with Option 2. It is very important to have as many rounds as allowed by the rules.
Usually, shooters with magazine fed shotguns prefer to have a 12-round magazine tube. Why? Because they can load 4 rounds while moving from the start position to a first shooting position. This saves them precious time.
There are many companies which manufacture magazine extensions but most of the shooters prefer Nordic Components. Their magazine extension tubes are made of aluminum, which means they are lightweight but very sturdy.
Be sure to check how many buckshot and slug rounds you can load into your shotgun. Buckshot and slug shotshells are usually longer than birdshot shotshells.

Standard shotgun sight is usually not suitable for practical shooting. You need to have a long light gathering front sight. This gathers light and allows you to see a very bright dot. Just be sure to choose a sight which has a diameter of 2.5 or 3 mm. Bigger front sights will cover distant (50+ meters) paper targets on slug stages, making shooting uncomfortable.

There are a lot of sights which shooters use such as HiViz, EasyHit, TruGlo etc. I like the HiViz Compsight and EasyHit Champions.

A good magazine follower is important for reliable feeding. That is why you need to find and test a follower which suits your shotgun. Aluminum followers are soft and wear out fast if you shoot and dry fire a lot, so you need to replace them regularly.

It is possible to install an oversized safety button on some shotguns. It is recommended to have it to disengage the safety easier and faster even under competition stress.

Semi-auto shotguns have a charging handle. You need to install an oversized one for more comfortable manipulations. It will be very handy during an Option 2 condition or when you need to pull or push it during the stage.

Another upgrade which is required for a semi-auto shotgun is an oversized bolt release button. It enables you to load rounds faster and easier even under stress.

Next article is coming soon…

Thanks to Alexander Shorvayev from Molot-Open Team for his information about Open class shotguns.