The third article of the “Practical Shotgun Shooting for Beginners” series. Thanks for your great feedback and comments about the previous articles.

So, what types of targets exist in IPSC? I will describe the most often used ones. You can find detailed information about them in the IPSC shotgun rules section. 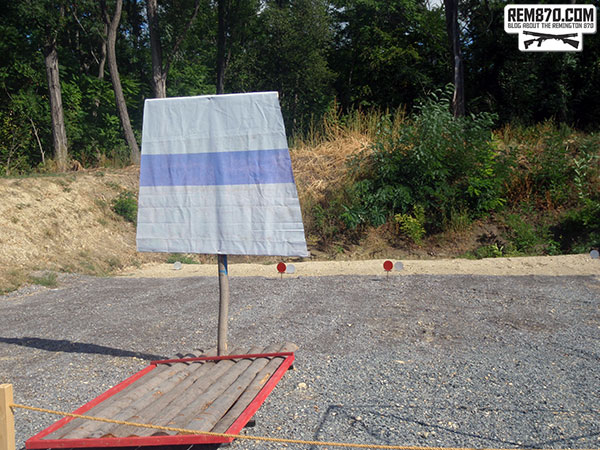 There are paper, steel and clay targets. They also can be divided into two types: static and moving.

There are several types of steel targets in IPSC,
-round and rectangular plates
-popper and mini popper

Plates are usually installed on a platform. It can be a low or high platform. Metal must fall to score. Poppers are heavy steel targets which are often used on shotgun matches. They are also used during duel shooting matches (we’ll talk about duels later).

Targets can be painted in red or white to indicate that they are penalty targets. This means that you will receive a 10-point penalty for each penalty target that falls. On the other hand, if a penalty target was hit but still stands, then you won’t receive a penalty and that is very important to know. We’ll talk more about Practical Shotgun scoring later on.

It is important to know that poppers are falling slowly, so if you have several plates and poppers, then start with a popper and then hit the plates. That way, the popper will fall when you are finished with the plates and you will be sure that no other targets are standing behind.
When metal targets are used on slug stages, the minimum distance to shoot from is 40 meters in order to avoid dangerous ricochets.

Clay targets are just regular clays which are used in trap shooting, for example. They are usually installed on some kind of holders. I remember the Bayern Cup shotgun match in Germany where they put clays on a fishing line that was on a slug stage. It was pretty interesting to shoot them.
They are often used on birdshot stages. They can be static or moving. You will often see them on swingers:

They can be activated by many ways; shot into a popper, pulling a rope etc. The target starts swinging when you hit the popper. If we are talking about a moving target, the easiest way to hit it is to catch it at the top point of the trajectory. Some creative match organizers hide the point of the top trajectory so they can make the job more difficult for a shooter. It’s a tricky target and you need to learn how to shoot them. 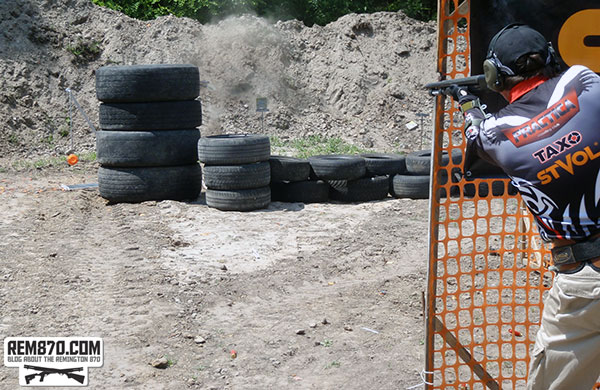 There are many variations of moving targets and you need to visit many shooting matches to see them all.

Remember, that it is important to know the Practical Shotgun Shooting rules, for example:
“9.5.8. Frangible targets must be fully penetrated or break with a piece separated from the original target to be counted for score.”

This means that even if you see the smallest piece of a clay target separated, you don’t need to shoot it again. Newbies often try to destroy it, completely wasting precious time and ammo! 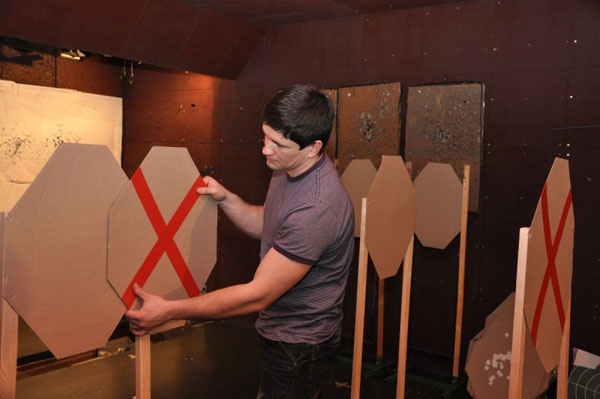 There are paper targets of several types. The most commonly used are A4 and IPSC Targets. They are used on slug and buckshot stages. They can be attached to swingers. Also, they can act as penalty targets when painted in a different color.

IPSC Rules:
Scoring paper targets must be engaged with a minimum of one round each. In the case of slug ammunition 1 or 2 hits can be nominated to score (the default is 1 hit). In the case of buckshot ammunition the best two hits count for score.

The trick with the IPSC diamond shape target is to aim at the top part of the target so you have a better chance of hitting the Alpha zone. Remember, that all shotguns have a major power factor (we’ll talk about power factors later). The scoring will be as follows:

This means that if you see that you hit the C zone, then you don’t need to shoot the target again because you will waste precious time and hitting an A zone will give you just 1 point more. But if you hit the D zone and the stage is short, then it may be useful to shoot it again. But you need to calculate the Hit Factor on one of the applications available for IPSC shooters; for example, the HitFactor IPSC. The hit factor is calculated by adding the highest value stipulated number of hits per target, minus penalties, divided by the total time to complete the course of fire. The shooter awarded with the highest hit factor win the stage and/or match).

The 0.5 centimeter is a non-scoring border around the entire target and if you hit within that zone, you are going to receive a -10 penalty. No shoot paper target is scored the same way as the no-shoot metal plate: -10 points. Together with up to 5 points which you could score, that will be a total of -15 points. Missing is the worst thing that can happen when shooting paper targets. I recommend controlling your hits and always shooting again if you missed the target.

Stage or Course of Fire (COF) can be one of the following:

Short – Must not require more than 8 rounds to complete and are restricted to a maximum of 12 scoring hits.

“The approved balance for an IPSC sanctioned match is a ratio of 3 Short Courses to 2 Medium Courses to 1 Long Course.” 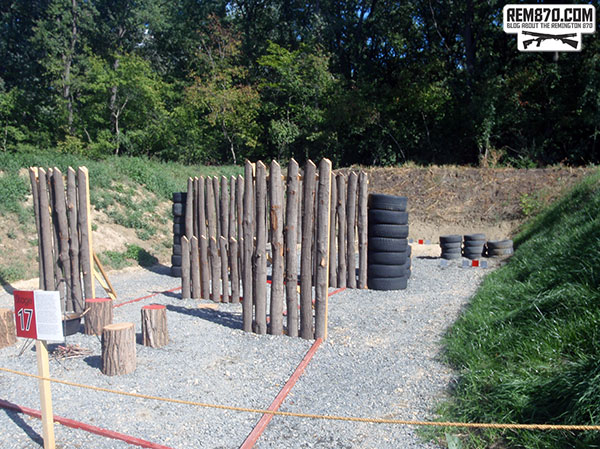 That balance is very good but long stages are always giving the possibility to get more points than any other stage. You can often see disappointed shooters which did bad on a long stage, but that doesn’t mean anything. You need to forget about the bad stage immediately and get ready for the next stages. Two Medium Courses or 3 Short Courses have as many points as 1 Long Course.

Now, let’s talk about each type of stage in details. Usually, short stages don’t require a lot of movement and they can start as Option 3 when the shotgun is unloaded. They usually require the shooter to shoot very fast and the top ten shooters can all have similar results divided by just one-hundredth of a second. You need to be very accurate with penalty targets on such stages because they can ruin your result.

Medium stages usually require movement and the loading of a shotgun. They usually require more skills from a shooter. Train to load your shotgun on the move while moving from one position to another because this will save time. Try to never load a shotgun while standing still.
Long stages are the most important ones. They require you to move a lot, shoot a lot and load a shotgun a lot. You need to train for long stages regularly because they can give you a lot of points. They also require you to be in good physical condition.