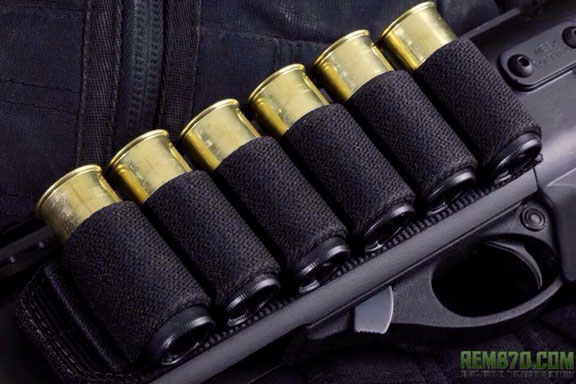 Thanks to Tommy Geraci, one of the blog readers for making this review!

WARNING: These sidesaddles will not work with field length or hunting fore grips. Most tactical fore grips that do not recede past the shotguns receiver when fully cocked back, are the most ideal to run in conjunction with a sidesaddle.

TacStar has been known as an inexpensive alternative to some of the more expensive sidesaddles currently on the market for a variety of shotgun platforms. But does the price really determine the potential quality and dependability of a product? I hope to answer that question later in this segment.

The Remington 870 TacStar sidesaddle is comprised of 2 pieces, the aluminum sidesaddle receiver mounting plate and a nylon plastic 6 round shot shell holder mounted to the shotguns receiver using two large Allen screws. The nylon plastic shot shell holder is held into place on the aluminum mounting plate with 6 flat head Allen screws. When I first purchased my Remington 870, the very first sidesaddle I installed onto it was a TacStar 6 round sidesaddle. It was identical to the one seen in this review. The first problem I had with the TacStar sidesaddle was that a few of the 6 flat head Allen screws would come loose due to the recoil of my shotgun. Because of the open design, once the small flat head Allen screws start coming loose they will fall off into the dirt, grass and so on and the shooter will most likely never see them again. Applying a bit of Loctite to all of the screws might help prevent this from happening.

The second problem I had was that over time the two large sidesaddle mounting screws (that screw in through the receiver and into the aluminum mounting plate) had actually ripped the threading out of the mounting plate. Upon inspection, the only hypothesis I could come up with was that once again the recoil and frequent use had something to do with it. I called TacStar and had them send me another mounting plate and screws free of charge. My customer service experience with TacStar was exceptional. Not everyone will experience the same issues but since I’m a fairly avid shooter I will assume I’m not the only one who has experienced similar malfunctions with the TacStar 6 round sidesaddle.

I was out shooting awhile back and I got pulled over by a Ranger while in the desert outskirts of Las Vegas. The Ranger asked to run the serial number on my Remington 870 while the TacStar sidesaddle was attached. Well, the TacStar sidesaddle covers the serial number of the shotgun and if you don’t have the necessary tools to remove it on hand, it can lead to an even stickier situation. Luckily I had several other guns that the Ranger was able to verify as “clean” and he let me go. My point is, due to the poor design of the TacStar sidesaddle it may pose further problems when pulled over with it installed on your shotgun.

I recommend this sidesaddle for a budget build and people who don’t anticipate shooting frequently. As there are many people who don’t mind looking past the design flaws for the justifiability of the low price. That’s not my area of concern as that’s a decision left in the hands of the shooter and their demands. Due to it’s poor design I would not be able recommend this to anyone in search of a high quality and dependable sidesaddle.

The Remington 870 Vang Comp Systems DSAC is truly unique and original. It is comprised of an matte black anodized aluminum side mounting plate layered with Velcro to attach a 6 round elastic ammo carrier. The aluminum mounting plate has a serial number cutout. That is a very helpful design, which will speed things up when getting pulled over by the police.

The Velcro design is excellent. If the shooter has a few extra removable elastic ammo carriers, they can be attached to tactical vests, bags for quick swap outs. Literally anything that has female Velcro will aid in holding extra carriers. The only aspect I question the durability of, is how well the Velcro will stay attached to the aluminum plate after extended periods of time and hard use. Since I do not have months or years to test the Vang Comp DSAC I cannot be certain that this wouldn’t be a problem for some users.

I have one minor aesthetic issue with the DSAC. My problem is in regards to the two trigger pin screws that run through the receiver and into the aluminum mounting plate. The two trigger pins are shiny stainless steel (silver in appearance, see picture below). The Remington Marine Magnum is the only 870 shotgun that’s silver in color, the great majority of Remington 870’s are either cerakoted black or are blued. This is a very minor complaint I have, but I can’t rule it out since aesthetics play a big roll in the customer’s decision to purchase. The positive aspect about the two mounting screws is that Vang Comp went with an enlarged flat head design for the DSAC and used stainless steel for the screws, so no more stripping threads. Allen keys can be hard to find but with this design the shooter can use a flat head screw driver, quarter, knife and so on to remove the mounting screws if need be.

Ultimately the design of the Vang Comp DSAC is excellent, it has unique attributes that only further enhance its versatility. I would recommend this to shooters in need of versatility. I would also recommend this to more frequent shooters for tactical applications and competition shooting. The DSAC appears to be high quality and has great design features. The DSAC has a good chance of standing the tests of time while under hard frequent use and to top it all off the Vang Comp Systems DSAC is 100% made in America.

Mesa Tactical offers by far the most options for tactical shotguns. They make 3 versions of the Sureshell ammo carrier for the Remington 870. Mesa Tactical offers a 4 round, 6 round and an 8 round sidesaddle. With other options like right side shell holders, saddle rails and stock mountable sidesaddles just to list a few. However, all of which are available for the Remington 870 platform.

It features some very different designs. For example, on the inside of the shot shell holder there is an elastomer tube made of Santoprene thermoplastic. This elastomer helps to keep the shot shells snug while inserted in the shell carrier. All of the Remington 870 Mesa Tactical sidesaddles are sold with a back up white elastomer tube that can be swapped out by unscrewing the screws found in the back plate of the sidesaddle. All Mesa Tactical sidesaddles also come with an adhesive backed rubber gasket, this gasket will help prevent the sidesaddle from making surface contact with the receiver. The gasket acts as a protective layer between the back of the sidesaddle and the surface of the shotguns receiver thus protecting the shotguns finish and preserving its market value.

One of the important aspects to include in a quality sidesaddle is the accessibility to be able to visually see the shotguns serial number. The Mesa Tactical sidesaddles are all designed around the serial number. It also incorporates a closed back plate with several Phillips screws. Since these screws were designed in the back of the sidesaddle and not in the front, odds are that if they were to ever start coming loose the receiver would prevent them from unscrewing enough to be able to fall out.

Aside from all the positive attributes and designs there is one down fall I’m aware of. The front trigger pin is the replaced by a set of Chicago screws. These screws have been known to be a problem for some shooters. If they are over tightened they will snap from the middle, and in some cases extended heavy use has been known to cause this problem as well. I have personally never had this issue but I did lose the small flat head Allen screw for the rear fastener during assembly. Mesa Tactical sent me a new one in the mail a few days later. So at that point it’s just a matter of contacting Mesa Tactical and requesting new hardware.

Every shooter must identify their needs and demands for their firearm. Once the shooter has figured that out, then this review will certainly come in handy in aiding the process of selecting which side saddle may be right for you.

I highly recommend the Remington 870 Mesa Tactical sidesaddle lineup to every realm of shooter looking for a high quality, dependable and rugged yet light weight sidesaddle.