Rem870.com: Peyton, you published a translation of the 15th Century Samurai Musashi’s classic book “A Book of Five Rings”. Could you tell what this book is about and why it is important?

Peyton Quinn: I think more importantly is what this 16th Century Samurai’s book was about itself because it is often misunderstood in my view and widely so too. 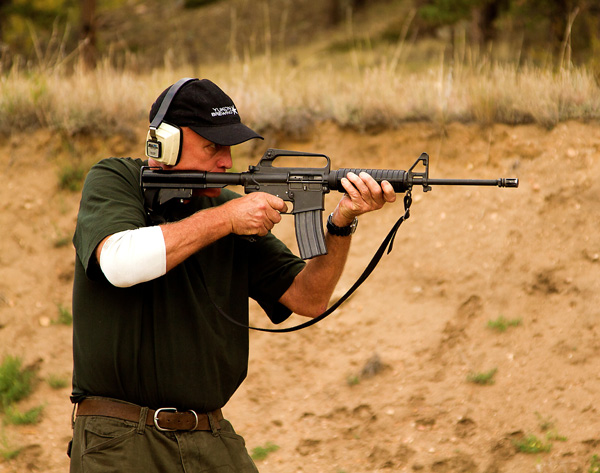 Now many readers here may have no knowledge of Musashi, but he was a 16th Century Samurai in Japan who was victorious in more than 20 and perhaps many more individual ‘duels to the death’ with other samurai. He was of course never defeated. His book is  a ‘book of strategy’ and ‘how to train for victory‘.

But for most people due to the English/Japanese translation where some concepts are not present in both languages, and the tendency for Musashi to speak in extended metaphors etc, his book seems somewhat ‘mystical’ or even in places ‘incomprehensible‘.

But imagine if one truly can the tremendous adrenal stress involved in facing another samurai with 3 foot razor sharp piece of steel in his hands which he has been trained to kill with since puberty or earlier.

Musashi pokes fun at other schools and their training methods because he knows from actual experience with the real thing that ‘technique‘ with the sword in real killing is not a fraction as complex as the commercial ‘sword fighting schools’ in his day made it seem like.

I have studied Asian Martial arts system most of my life an I am 61 years old now. I have advanced black belts in three different Asian martial systems: Karate, Judo and Aikido and a good grounding in other systems too.

In fact I was inducted into the Black Belt Hall of Fame in 2008. But also, I was a bouncer and ’cooler’ in a very wild and rough New Mexico bar in the early seventies. I know real fighting hand to hand combat, or dodging beer bottles and pool cues and the occasional blade is not nearly as complicated as martial arts makes out with it obsession on ‘techniques’. 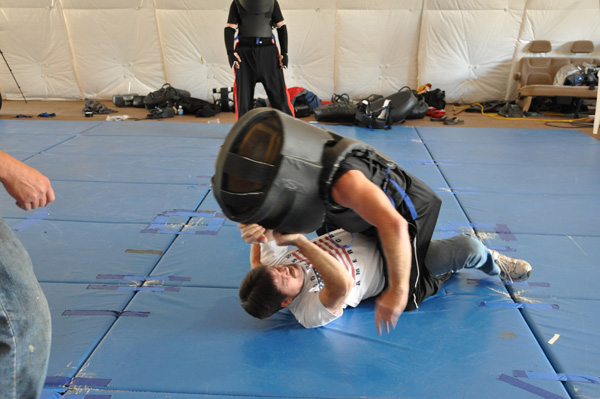 Indeed most Asian martial arts techniques have no place or relevance or are even ‘safe or possible to execute or try’ in a real fight. The true problem is what Musashi whole book is about too, and that is dealing with the adrenal stress so you can move quickly and intuitively when someone else is trying to slice and cut you down with their razor sharp Katana.

This is not widely understood at all though. Consider this statement by that grim swordsman “ Think neither of victory or of yourself, but only of cutting and killing your enemy”.

I have yet to see this statement explained properly to my satisfaction as to what he meant by it. It is not samurai ‘machismo’ it is not as some mistakenly think, about his samurai ‘acceptance of death’ either. Musashi was only concerned with making the opponent die.

What he means is “If you re thinking of victory or of yourself then you are in your higher self-aware mind. In this case you will have difficulty ‘cutting and killing your enemy’ and he may cut you down first. This is because if you are thinking of ‘victory or yourself’ THEN you are in your ‘training and practicing. Self-Aware mind , but this is not the mind that controls and wields the sword in an actual life and death combat”.

I think I can get this idea across through an example we are all familiar with.  Your are driving your car and a child’s ball rolls in front of your car. Your foot hits the brake immediately and without self-aware thought. It is only after you have hit the brake that you  are aware that you did it!

That automatic response of hitting the brake was paired with the cue of seeing the child’s ball roll in front of you and made ’non-self aware’ by  your previous driving experience where under an adrenal dump you hit the brake in an emergency to stop the car. Now your self-aware mind is taken ‘out of the decision loop‘. It is automatic, much faster than if you had to ‘think about hitting the brake’ first before doing so.

Musashi is telling us that your sword has to move the same way, without conscious thought. Having lived through as many sword duels as he did this became very clear to him. He became like that 15% or the pilots that shoot down 85% of the enemy planes.

At RMCAT it is the adrenal stress under which the people train that makes their responses with a gun or their ‘knee to an attacker’s groin’ or the edge of their hand to the attacker’s carotid artery’ automatic precisely because it was learned in an adrenal state.

Now that adrenal cues of an attack elicits the needed motor response without real self awareness ‘slowing it all down‘.  Very much like your hitting the brake in your car when you see the cues of a collision. 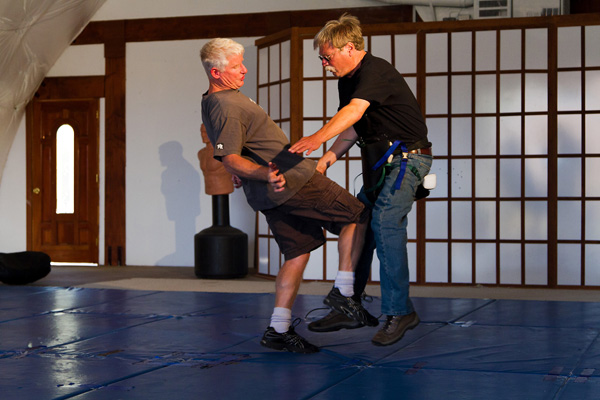 Rem870.com: Peyton, you have several courses available in your school. Please describe them.

Peyton Quinn: The core course is on conflict de-escalation and avoidance and ‘hand to hand’ fighting . Here we use special armor that the instructors (who play the assailants) wear in the scenarios. We call it ‘Predator Armor’ and my associate and close friend Bill Kipp (FASTDEFENSE.COM) has trademarked it as such.

It is to learning ‘hand to hand fighting’ what perhaps Simunition was to firearms training years ago. But to be frank, it is even a more powerful and effective as a training method.

In martial arts you never learn to knock somebody off their feet by knocking them off their feet. You do not learn to knee somebody in the groin so hard their feet come off the ground by doing that either. Of course not as it just was not safely possible. But with Predator Armor it is safe and possible and it works amazingly well and quickly to train people to do these things effectively in a crisis and automatically too..

People learn to do these things better and faster than is otherwise possible using this training tool and the adrenal stress driven, scenario training methodology. It is just that simple on the most important level too.

I really am sincere when I say a weekend of scenario based, adrenal stress driven Armored Assailant training can make one a better real world fighter, with both the ability to strike down an attacker or drive them off, as well as to spot the potential conflict and avoid it in the first place, than even years of traditional Asian martial arts training can.

I feel a lot of firearms training has gone the way of ‘Traditional Asian Martial Arts Training’ too. It has become ritualized and somewhat divorced from the reality of what the person is supposed to be training for. This in what Musashi meant as well speaking of his own time and commercial fencing schools.

He saw from his real world experience that they were making something more complex out of it (using the sword in battle) than it really is and yet they were ignoring training for the real problem of adrenal stress.

Let’s look at this in terms of most of today’s firearms training then. How much do ‘targeting shooting skills’ mean in a real gunfight ?. I would say very little if any.

If the students in our gun courses can’t really know if they have a revolver or auto in their hand under the adrenal stress driven scenarios at RMCAT then how important is ‘trigger pull’ or ‘breath control in shooting to live incident? Neither is even possible or relevant really to a really using a gun to save your live or your wife or family’s lives.

If virtually nobody can even use the sights of any weapon in the shooting scenarios we do here, regardless of their previous training, is it reasonable to think they could do so somehow under the stress of an actual gunfight? No, I flatly say it is not reasonable to think or expect that.

Which do you think is going to be more life saving for you 1- Being able to change your auto pistol magazines very quickly? Or 2- Drawing and firing and moving and stopping the threat before you even finish one magazine?

Also can that student who has learned to the ‘quick magazine change’ have much hope of changing magazines fast under stress? I have seen many people actually fumble and drop their guns on the mat due to ‘loss of fine motor control’ here in their scenarios at least the first time out here at RMCAT.

Also a few times people have racked the slides of the shotgun, and jammed it in doing so in the scenario when on the practice range they likely had never even experienced a jam of any sort with their shotgun. 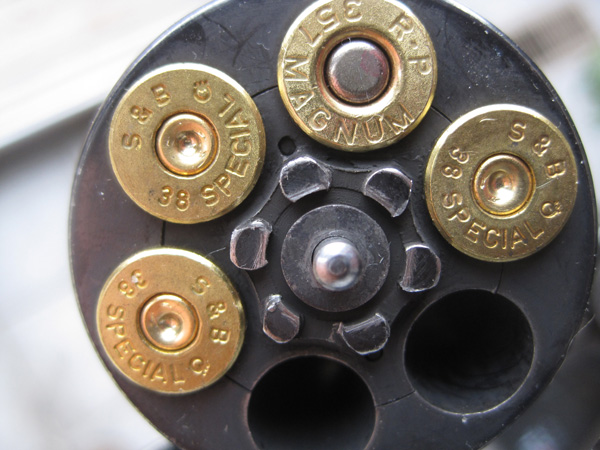 With double action revolvers I have seen people under scenario based stress somehow skip a cylinder and fire the round before and right after that loaded rubber bullet round between those other two cartridges! I have tried to make this happen deliberately and can’t do it. It occurs as the person’s finger goes ‘spastic’ and that is alone is what somehow makes it mechanically possible.

Rem870.com: What firearms do you use in RMCAT School?

Peyton Quinn: We teach the use of the revolver, semi auto pistol, pump shotgun and  at times the open- bolt submachine gun. The Ak-47 is so ubiquitous around this whole planet how could we not teach how to us that weapon?

It is the ‘McDonald’s of assault weapons’ globally speaking and its used everywhere in the world.

The M-16/AR15 family is covered as well. Military pattern weapons are easy to learn to use really as far as loading, charging and firing are concerned anyway. If you think about it military weapons really have to be. I feel it so quick and easy to teach people how to handle all basic shoulder fired and hand fired weapons that we cover most all types of firearms action types here in our Weapons Familiarization Module.

More specifically our main weapons are :

Special thanks to Peyton Quinn for this interesting interview!