I recently purchased my first shotgun, a Remington 870 Police Magnum. I had my local Scheel’s Sporting Goods store special order me the Remington Model 25015. This model came with the 18.5” parkerized barrel seen separately below, no magazine extension, and walnut furniture.

The matte finish of the parkerizing is even in color and non-reflective. The finish applied to the aluminum trigger housing is a little shinier and blacker, but doesn’t detract from the appearance of the weapon. It doesn’t appear to be a chemical finish however, and durability may be an issue, only time will tell. The bore of the barrel is very bright and smooth with no machining marks visible.

The walnut furniture is nice in appearance with a matte finish. The reflectivity is higher than the parkerizing as seen in the picture above, but it is still a matte finish. The close-up below show the grain and ribbed pattern on the fore end and the smooth grip area of the butt stock. The smooth pistol grip may need to be roughed up with some epoxy or grip tape, but I want to run a few more round through the gun and maybe try a polymer stock set before I start modifying the wood. 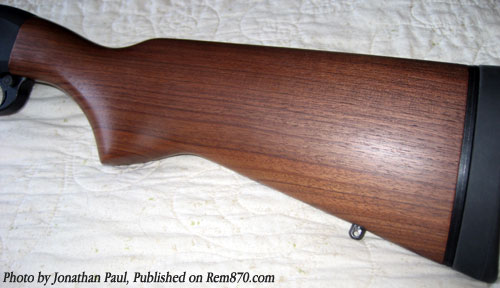 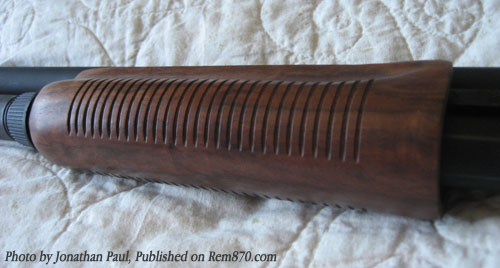 Most of my shooting history involves rifles and this is the first non-autoloading weapon I’ve owned. That said the action is tight and a little clunky, though I’ve been reassured that a few thousand rounds will have it sliding smooth as butter. The trigger is also heavier, longer and grittier than a finely tuned precision rifle trigger. The grittiness I’m sure will go away with use; as for the weight and length, this is a fighting shotgun and those are not exactly undesirable qualities in a serious weapon trigger.

Now onto the modifications. There were several modifications I knew I wanted to make right out of the box and those were: 20” bead sighted barrel, a magazine extension, large head safety, and an improved magazine follower. I purchased a 20” bead sighted parkerized barrel from the Remington Country Store. The finish matched with the receiver perfectly and the quality was identical to the quality of the barrel that came with the gun from the factory.

The magazine extension I chose to go with was the Sage International extension designed to be used with 20” barrels. This extension gives the shotgun a total capacity of 7 rounds in the magazine plus one in the chamber. The extension is very nicely machined and the fit was flawless. I did not use the supplied magazine clamp, but it looked to be similar in design to the Remington factory clamp. My only complaint with the extension is the finish. As you can see in the picture below it does not match the parkerizing found on the barrel. It has a little slicker feel to it almost like galvanizing. As I mentioned, I did not use the Sage magazine clamp because I was planning on using the Mesa Tactical magazine clamp. I like the beefy appearance and upgradability of this magazine clamp. The machining and finish on this item are superb and surprisingly the anodizing of the aluminum clamp almost perfectly matches the parkerizing of the steel barrel. 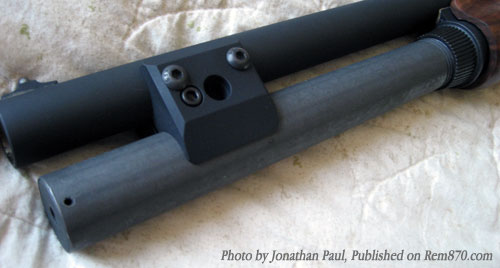 Mostly due to Vitaly’s articles I decided to go with the S&J Hardware manufactured jumbo safety and machined Delrin follower, pictured below. Like Vitaly described, I found the safety easy to activate, but not in the way while I was firing. The magazine follower is bright and gives both a visual and tactile indicator that the magazine tube is empty. Also, in 50 rounds firing from a fully loaded magazine, the follower never bound up in the magazine tube. 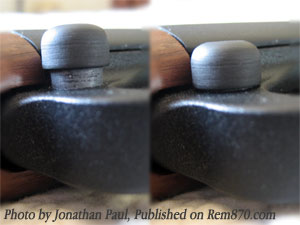 Also wanted to mention that I followed the instruction here: Rem870.com to install the safety and had no problems.

As it stand right now the shotgun is a very capable weapon and I got the look and feel that I wanted. There are however, other options and accessories I want to try out and see if I like better. These accessories include:

-SpeedFeed IV-S shortened tactical stock set – The LOP of this shotgun with the walnut furniture was a little long to comfortably assume a tactical squared off stance. Since I also wanted to try out a pistol gripped butt stock this product would allow me to try both.

-Mesa Tactical Side Saddle – Right now I don’t have a provision for additional ammunition on the weapon and if the quality of their magazine clamp is any indication, one of their side saddles would be just the ticket.

-XS Big Dot sight – I am a little worried about the visibility of the standard bead sight in low light conditions and I want to try one of these sights to see how they will work for me. 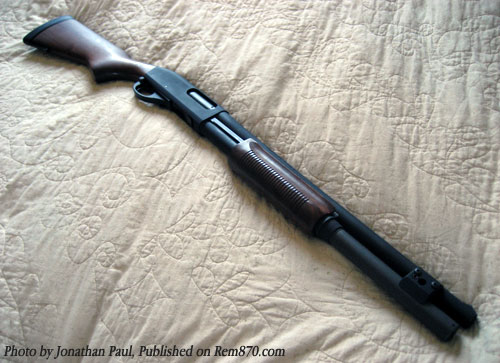 Jon, thank you very much for the article and photos!