If you’ve read a lot of Remington owner’s manuals for other weapons of theirs before, then a lot of the literature will look the same in this one. In the beginning, the manual goes through the ten commandments of firearm safety. If you are a newbie at operating firearms, then you may want to read this section to become familiar with how to stay safe with the rifle. Otherwise, skip ahead and read about the various parts of the Remington 700. Although you may be familiar with basic parts like the stock, muzzle, barrel, and trigger, it is important to familiarize yourself with the bolt handle, bolt assembly, safety mechanism, receiver, and ejection port. These are the parts that may be located in slightly different places than they are in other weapons made by Remington.

You may notice the Remington 700 manual also contains quick information about two other Remington rifles; the Model Seven and the 673 model. You won’t find extensive information on these two models but you will find parts lists and diagrams showing where the parts are located on each weapon. The Model Seven and 673 model are less popular Remington rifles than the 700. If you need to know any other information about them, you can just refer to what is talked about with the 700 because it is basically the same information. 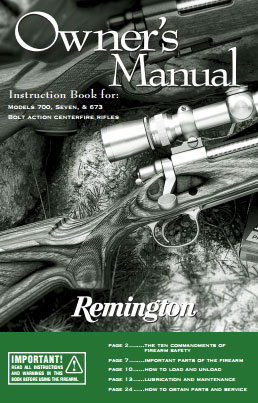