The mount is especially designed for tactical operations. The mount places the rear sling attachment in front of the user. This allows shooters to shoulder their weapons quickly without becoming tangled. The mount also allows a single point attachment, or it can be used with a front sling mount for a two-point sling installation. The loop on the mount allows you to attach up to a 1 ¼ inch wide sling. The rear mount is installed directly behind the receiver in front of the butt stock. 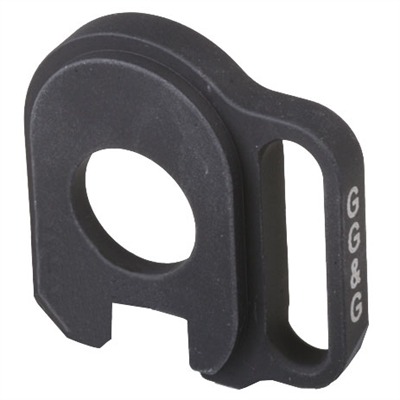 The material is hard-coated anodized in matte black. The right hand model HK-style clasps for the Remington 870, 1100, and 11-87 positions the sling on the left side of the stock. The Ambi model for the Remington 870, 1100 and the 11-87 accepts other clip on sling fasteners. The “Rem Front Mount” positions the sling on the right side for Remington shotguns with external-retention type magazine caps.

The mount as stated is designed for tactical use, but of course can be used in any shooting situation. Control of the weapon and preventing tangles is important in a combat situation. Many shooters do without slings for various reasons but one reason is that most slings and mounts because of the inherent design allow it to become tangled easily. With the GG&G Shotgun Sling Mount, tangles are not a problem.

Why do you need a single point sling attachment? You can mount your shotgun in a tactical situation on either shoulder so when making fast entries you can swing through doorways much easier allowing moving around corners easier and faster. This helps to prevent letting others know of your position because the weapon’s barrel is sticking out from the corner. The mount works well when wearing body armor.

The mount attaches in minutes is rugged and does not snag on objects. But it protruding enough to be a hindrance in home defense especially. Once mounted it adds to the looks of the weapon and after tests of the mount in a tactical training show that catching on objects is not a concern.

Many shooters simply cannot get used to a sling and this is because they find it takes critical time to shoulder the weapon or to bring the weapon to bear from the shouldered position. In hunting or combat situations you cannot always carry the weapon at port arms you must be able to sling the weapon at certain times. Slings are critical and having the right mount is important when transitioning from your shotgun to a sidearm. Without a sling, you would have to abandon the weapon to bring a sidearm into use. This is unacceptable in most cases.

Some shooters may not want a sling or claim it is a hindrance simply because they do not fully understand the need for one or do not know how to utilize a sling and mounts properly. Having both hands free and still being able to control, your shotgun in a tactical situation is crucial.