Until recently, the typical combat shotgun was a pump action, or sometimes called a slide action. It was used because of its reliability. This is important in a tactical situation where the weapon is covered in dirt or mud because you can pump through some obstructions. You are relying on your actions to cycle the round and not the energy of a fired round to cycle a new cartridge, which is how many semi-automatic shotguns operate. 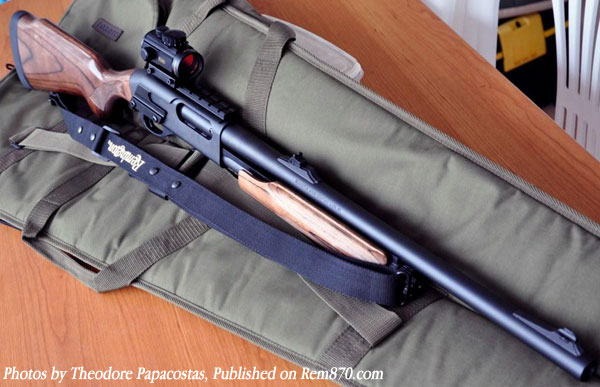 A pump action allows the shooter to mix cartridges in the tube and to use low power or specialty rounds. The fore-end is pumped to cycle a cartridge and in older model pump actions there was not a trigger disconnect so rounds could be fired as fast as you could pump if you held the trigger down. Soldiers called this slamming.

A pump action usually allows 4+1 meaning four in the magazine and one in the chamber. You can get a two round magazine extension bringing the total rounds up to seven and in some cases you can adapt for even more rounds. Some state laws however may have restrictions so be sure to check with your local authorities. Most states call for a so-called duck plug, which only allows a three round capacity when hunting migratory birds.

A pump action shotgun is not considered a semi-automatic but rounds can be fired quickly and some claim to be able to fire faster than a semi-automatic. The older models of pump actions could fire faster than a semi-automatic because of the ability to slam. Today the speed in which you can pumps determines how fast you can fire, which means you cannot pump at the same consistency for very long. Your arm will get tired and slow down. The recoil is more with a pump action than with a semi-automatic. The semi-autos uses the round’s energy for cycling rounds thus, reducing recoil somewhat.
Pump actions are inherently safer than semi automatics because before you can fire you must pump the fore-end, and they are preferred many times for hunting for this reason. Pump actions are also preferred for hunting because their reliability even when dirty. Some prefer to sheet or trap shoot with a pump action while semi automatics are now becoming more popular for sport skeet shooting competitions. Some ranges have specific rules about cycling a pump action after shooting so know the range policy.

Pump actions make excellent home defense weapons and simply chambering a round may be enough to send an intruder running but of course do not rely on that. Every situation is different but having five rounds will more than likely be enough. Some believe they may need more if the fight goes outside but if the intruder is, fleeing and you continue to fire you may have a harder time proving you fired in self-defense. You can mix the shells up in a pump action so if you want a very light load for home defense you do not have to worry about it being strong enough to cycle the rounds. Having powerful rounds loaded for home defense can cause injuries to others in the home and the neighborhood because of round penetration through walls and doors.