Various semi-automatic shotguns can have a detachable magazine. This typically means the rounds are loaded into a box type magazine or clip and is then inserted into the shotgun just as if you would a rifle or even a handgun. The magazine is loaded then inserted versus loading the under the barrel tube magazine. 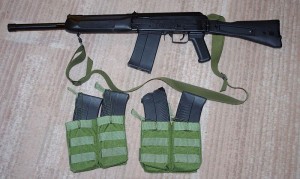 This means you can fire empty, then slap a fresh box magazine into the weapon, and continue to fire. Essentially, you can have a semi-automatic shotgun loaded with up to 16 rounds and can have another 16 loaded in a matter of seconds. Tactical or combat reloads are not necessary with a detachable box magazine.

Some models also have detachable tube magazines, which once fired empty, have to be removed and reloaded. In addition, you may have to turn the loaded tube magazine into place as one empties. You can purchase models that hold anywhere from eight to 16 rounds. Some models can be adapted for a 10 shot tube magazine extension. The weapon is loaded as you normally would without having to remove the tube.

Many states currently have or are considering new regulations on magazine capacities. Additionally, weapons with certain characteristics are also under review and some states may ban certain style weapons. Laws may make a distinction between tubular extended magazines, and box type magazines.

Box magazines allow the shooter to reload very quickly whereas if you fire empty using a tube magazine you have to reload by feeding the shells one at a time. The laws according to some are designed to reduce the number of deaths during an active shooting. Assumedly if the shooter had to stop and reload, it would reduce the number of fatalities.
The military and law enforcement may use extended capacity magazine to have superior firepower in a firefight. The typical game hunter would probably not need an extended detachable box type magazine. The extended capacity magazines can be used on some firing ranges designed for tactical training, but your typical public firing range is likely to have a ban in place.

The semi-automatic shotgun with a detachable magazine can be used as a home defense weapon but homeowners are cautioned on the type of rounds loaded because of possibly injury to others in the home. Having a 10 round magazine loaded in the weapon and one ready to replace the one in the weapon is probably all of the firepower you would ever need. You would not have to reload while under cover, all you simply need to have is extra magazines available.

Firearm training experts put a lot of emphasis on being able to reload quickly in a combat situation. The trainers now teach the combat reload if you fire one replace one. If you are a shooter and you know your opponent is, reloading you may see an opportunity. However, fast loaders may not give the shooter a chance and having the ability to insert a magazine ensures you do not give your opponent any chance to advance on your while reloading.