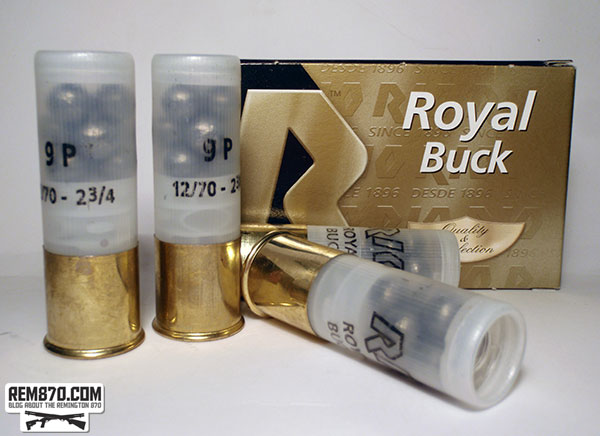 This is review of the RIO Royal Buck. This is buckshot I used in shotgun buckshot pattern test.

This is good buckshot ammunition but it has wide shot pattern because it doesn’t have container wad. Actually, the shell is clear and it is easy to see what’s inside. but here is what you can find inside the shell: 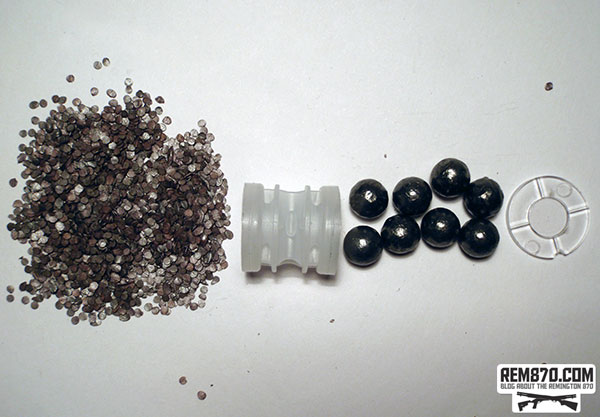 The shotshell has smokeless powder. It looks like green/brown rounded flakes.

I would like to start off this review with a big thanks to Steven at BulkAmmo.com and Vitaly of Rem870.com for the opportunity to do this review. Vitaly put me in contact with Steven who provided most of the buckshot used in this review. 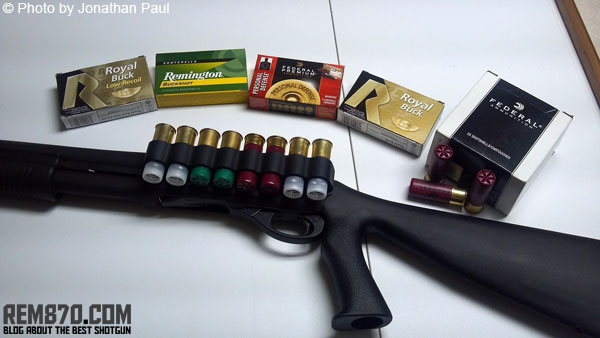 There are five types of buckshot that were evaluated for this review. Four of them were provided by Steven of BulkAmmo.com and one was from my personal stash. All 12 ga ammo shells tested were 2 ¾” 9-pellet 00 buckshot, the details of each are as follows:

*muzzle velocity as listed on packaging, no chronograph data was collected
**this was from my personal supply, all other ammunition was provided by BulkAmmo.com

Opening these boxes of buckshot immediately put a smile on my face. Having recently only been shooting cheap, bulk pack, birdshot it was refreshing to see the tall, shiny brass these manufacturers use for their buckshot hulls. Despite how pretty they looked, I knew there would be two factors that would be weighed more heavily than all others: extreme spread at various distances and felt recoil.

I tested the five loads at 3 different distances, 7 paces, 14 paces, and 25 paces. My target was a large piece of cardboard, covered with waxed paper when necessary to extend the usefulness of the target. The shotgun used was a Remington 870 with 20” improved cylinder barrel. The following table shows the results of firing one round of each type at each range and measuring the extreme spread:

As you can see the Federal Personal Defense with the FliteControl wad dominated the extreme spread test with 25-pace results that were better than any other type’s 14-pace result. Also of interest is the tighter pattern produced by the Rio Low Recoil when compared to the full-velocity Rio Royal Buck load.

While obviously very subjective, I feel confident making a few comments on felt recoil as I was one shooter, shooting the same gun over the course of about 1 hour, the only change was the loading and the distance I was shooting at. Once I got home and started working on this article I found that the perceived recoil of each load directly corresponded to the velocity listed on the ammo boxes. Which considering they were all 9-pellet 00 buck loads makes sense. The Royal Buck had the most perceived recoil and was maybe 5% harder than the Federal Buckshot (which I used as my baseline). The recoil produced by the Remington shell was indistinguishable from that of the Federal baseline load. The Rio Low Recoil had considerably less recoil than any of the three full-velocity loads. The Personal Defense, moving 55 fps slower than the Rio Low Recoil, had the lowest perceived recoil.

I can see from BulkAmmo.com’s offerings that another buckshot roundup will be in order, but until then I think I’m going to stock up on Federal Premium Personal Defense buckshot to keep loaded for home defense and probably a bunch of Rio Low Recoil buckshot for matches or practice. Keep in mind my Remington 870 is a pump action shotgun and doesn’t have a problem cycling these low recoil shells. Always test your chosen ammunition for cycling and patterning before relying on it for competition or personal defense. 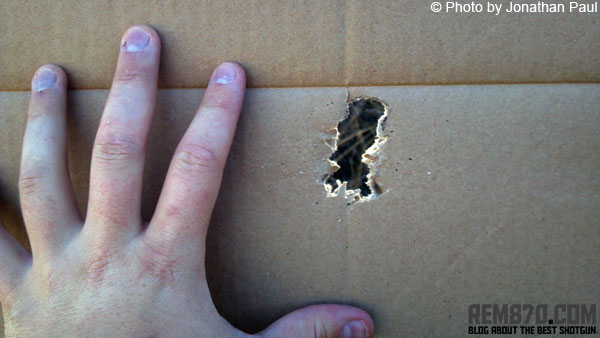 Thanks to the http://www.bulkammo.com/ for ammunition for the test.