3 Months of War, Situation in Ukraine

A lot of subscribers asked me to write an article about the current situation in Ukraine. Some readers are still surprised that author of the Rem870.com isn’t from USA but from Ukraine :)

One of the questions was about the beginning of this war. Well, this war has deep historical roots; Russia never wanted Ukraine to be independent and used its army to destroy young sovereign Ukrainian states several times already.

You can read more about the background of the full scale invasion to Ukraine in the end of the post. 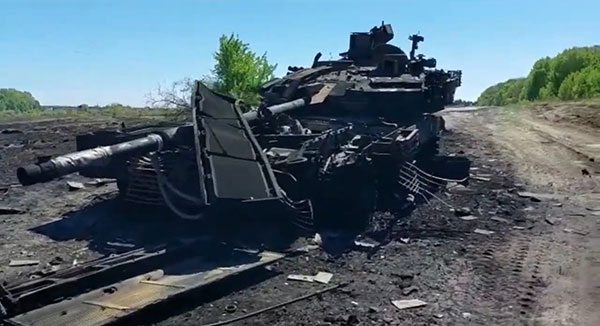 Myth about the Russian army as the second strongest army in the world was completely busted. They told that they can defeat NATO in weeks or take Kyiv in 2-3 days but they are still fighting with much smaller Ukrainian army with pretty small budget. Of course, that wouldn’t be possible without international help but hey; they told they were ready to start a war with the whole NATO!

Detailed list of the documented (photo or video) losses of Russia: https://www.oryxspioenkop.com/2022/02/attack-on-europe-documenting-equipment.html

The whole world saw the bravery of Ukrainian people and we received lots of modern weapons. They help us to effectively protect Ukraine.

What’s happening at the moment? 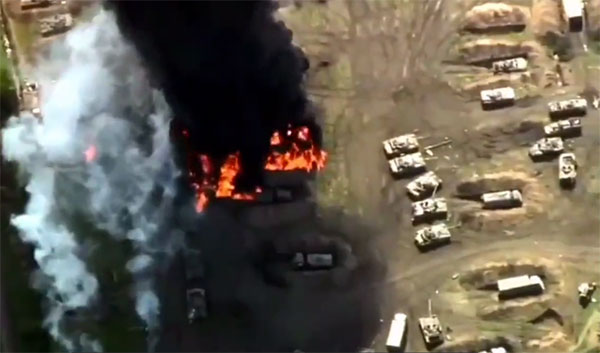 Artillery Strike on the Russian Positions

Russians try to conquer territory but our forces are holding them paying the high price, unfortunately. Forces encircled in Mariupol for 67 days still fight back and invaders cannot do anything about that. I don’t understand how can they still fight without any supplies, ammo, reinforcement, medical help and evacuation of wounded soldiers and under constant air and artillery strikes. Modern day 300 Spartans.

The fighting on the east and south is really stiff. But Russian forces don’t have enough forces to push through our defense lines.

Will Putin use tactical nukes to break the situation and try to win this war? Nobody knows what this crazy dictator is going to do next.

What about regular people?

1. Humans can get used to anything.
While officials say that it is too early and dangerous some people return to Bucha, Hostomel, Kyiv and other cities close to the combat. Some are lucky to find their house looted but not burned. Others find only ruins of their houses. But at least they are alive and that’s a lot nowadays.
My friends from previously occupied cities found that all of their guns, ammo, electrical appliances were stolen. Many of the neighbors are dead. But the war goes on; people try to get back to normal life. You can find cafes and even order pizza or sushi in Kyiv. There are some problems with medical care because a lot of doctors evacuated to safer west regions of Ukraine but life goes on.

You can see people walking and children play on the streets. Shops reopen, businesses continues to work.

2. Gas station queues
Some products are absent, for example gas. The queues are huge and you can wait 2-4 hours to get 10 liters (2.64 gallons). That’s when electric and hybrid cars have advantage. But remember that electric car cannot be used for evacuation due to limited range. 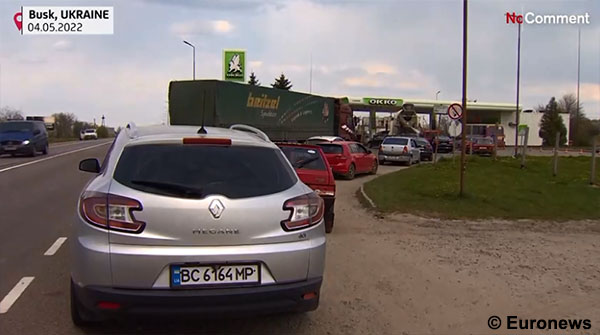 Guns and Ammo prices are 200-400% higher and it is almost impossible to find something in stock. But gun dealers try hard and import more and more AR-15 rifles and ammo. They are quickly sold out and there is huge demand. There is also demand for pump-action shotguns for home defense and precision rifles for some soldiers.
Ammo as well as magazines can be bartered for almost everything

While some people return and most of the refugees plan to come back some Ukrainians start to settle on new places. Children are going to kindergartens, schools; parents find jobs and study foreign languages. The longer this war will last the more Ukrainians decide to stay abroad, unfortunately. There are 5 million of refugees at the moment. Most of them are women and children. Men are forbidden to leave the country during the Martial law.

Ukraine started receiving artillery, tanks, IFVs, APCs and air-defense systems. Huge thanks to our allies. I think that we will need several weeks to teach soldiers to use them and deliver to the front line. And then situation may become much better for Ukrainian forces.

Please let me know if you want to know more about war in Ukraine or specific questions you want me to answer in next newsletters.

While most of the readers support Ukraine in this war, some people read Russian propaganda or simply don’t understand how this war started. So I decided to give you short explanation.

There was Peace in Ukraine for 23 years

Ukraine is independent state since the 1991. We gave up our nuclear weapons (1,700 warheads) for safety guarantees from USA, UK and Russia (Budapest Memorandum). Also, Ukraine destroyed most of the missile and strategic weapons which can hit targets on long distances.

Ukraine lived in safety for 23 years with no wars or local conflicts. There was a political crisis in 2014 when our corrupt President ran away leaving country with no government. Russia used that situation to annex Crimea with no or little reaction from the rest of the world.

Later in 2014 Russia sent armed mercenaries to the east of Ukraine to imitate a civil war and create puppet regime. They have long history of such operation: Finland in 1939, Czechoslovakia in 1968, Moldova in 1992, Abkhazia in 1998, South Osetia in 2008…

That was the moment when Ukrainians started to die in this artificial conflict. Russia said that they are protecting people from Ukraine but they didn’t need that help for 23 years! What happened next? Russia created this conflict like many others. They found pro-Russian people, gave them money, power and guns. Ukraine wasn’t ready for that; our army was small and outgunned. 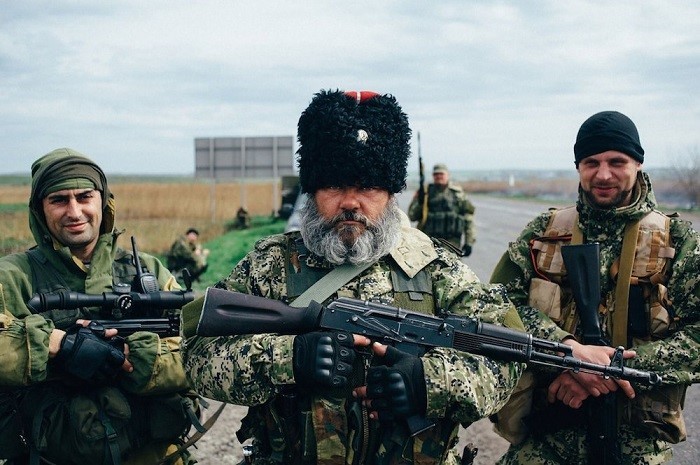 After fierce period of combat there were signed several agreements: Minsk-1 and Minsk-2. They were aimed at peaceful negotiations but then we had 8 years of war with limited use of Russian forces (without insignia). Ukrainian forces were regularly attacked by forces of puppet regimes of DNR and LNR.

We spent 8 years to strengthen our army and buy new equipment and weapons (like Bayraktar drones). Ukraine didn’t have any offensive operations during this period only defensive.

Russia says that we bombed Donetsk and Luhansk for 8 years. Compare photos of our cities the bombed for just several months and look at current photos of Donetsk without any visible damage. Who tells the truth?
Then Russia started full scale invasion on 24th of February. If you would receive $1 every time Russians (including Putin) said that they are not going to invade Ukraine, you would become rich. But they lied every time. There are numerous evidences that Russians knew exact day of the invasion months before it.

If you think that Putin is an adequate and logical person, remember that he talked with Macron, the President of France for 6 hours on February, 7th, knowing that he is going to invade Ukraine on February, 24th! 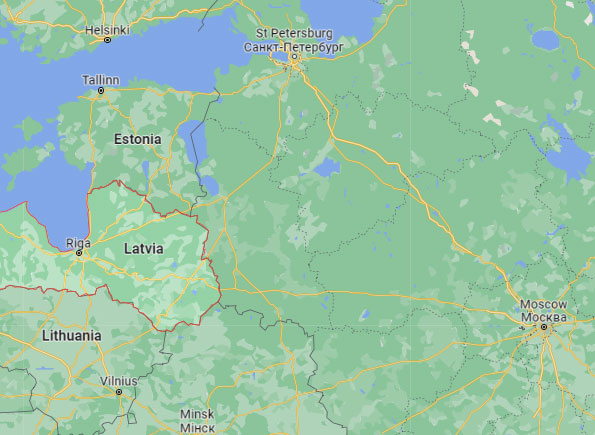 Also, this illegal invasion forces Sweden and Finland to join NATO to be protected from crazy and aggressive neighbor. They plan to join the NATO simultaneously summer, 2022.

Nazis?
Right Sector the far-right political party got only 1.8% of votes on elections in 2014 which means that they got just ONE seat out of 450 in Ukrainian Parliament. Svoboda, the nationalist political party again got just ONE seat out of 450 on elections in 2019. We elected Jew as a President in 2019, how could that happen in Nazi occupied country? A lot of Jews are fighting against Russian invaders at the moment.

After 3 months of war, Russians couldn’t show ANY evidence of Nazi battalions in Ukraine.
Azov battalion had some far-right soldiers but as with Parliament elections the percent of them is negligibly small.

If you Google “Nazis Russia” or “Russian far right”, you will be shocked how many of them in Russia.
Ukraine has nationalists which love their nation and country which is obvious after annexation of Crimea and invasion of Russia to Ukraine in 2014.

Conclusion
This war was started by a crazy dictator because of imaginary threats and his desire to go down in history. He expected to repeat the 2014 and take Kyiv in several days but Blietzkrieg failed. After 3 months, Ukraine is fighting with help of the world.

Thanks for all support we receive!

Support Author of the Rem870.com

My name is Vitaly Pedchenko, I am from Kyiv, Ukraine. I started this blog and forum to share information, tips, photos, and advice about the Remington 870 shotgun, accessories, and upgrades.

You can help my family using Patreon website (I have added several additional levels of help but you can choose any of them):
https://www.patreon.com/rem870