Russian war in Ukraine continues. The U.N. had recorded 2,421 civilian casualties in Ukraine – 925 killed and 1,496 injured. But numbers are much bigger because of the rocket and bomb strikes on big cities like Mariupol, Chernihiv, Sumy etc. Hundreds of people are buried under the destroyed houses.

You will find information on how to help Ukrainian army in the end of the article.

There are more than one million of gun owners in Ukraine. The population of Ukraine is about 40 millions of people, so that is not much. Rifles are just about 250,000 out of that number; most of the guns are shotguns. Handguns are prohibited for civilians. But you can own almost any long gun in Ukraine, from 22lr to 50 BMG rifle certified as “hunting rifle”. Silencers, high capacity magazines, thermal and night vision can be bought without limitations too.

Most of the people bought guns for self-defense before war started. That’s why there are a lot of shotguns on hands. But the war made its own adjustments.

Everything is Out of Stock 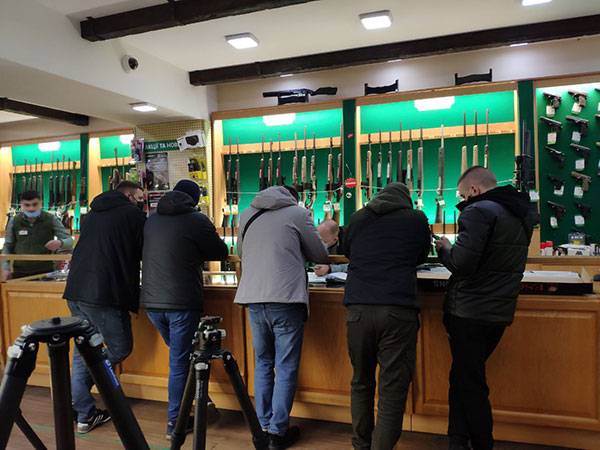 First of all, it is almost impossible to find a gun or ammo in stock. There are some really expensive hunting shotguns and rifles in stock and that’s all. Panic buying started after the first warnings about possible invasion.

A lot of Ukrainians joined Territorial Defense Units. They are like militia but supported by Ministry of Defense. Most of them are given weapons and ammo (AK rifles in 5.45×39 caliber). But many of smaller groups buy guns themselves. Many of the soldiers with issued AK rifles have their AR-15 rifles with them too.

AR-15 rifle is a good choice if you want to engage your targets up to 500 meters. They are easy to use, have a lot of upgrades and are preferred choice among Ukrainians. They were quickly sold out and the most difficult thing to find now is magazines. So have enough magazines for your gun. And of course you will need a lot of ammo.
AK rifles are simple and cheap. Civilian versions are sold in 7.62×39 caliber. Ammo is difficult to find because most military and police units use 5.45×39.

Bolt action rifles for long range shooting are really helpful and welcomed in any unit. Especially if shooter has an optic sight and can use his or her gun effectively. They are even more important during positional warfare. Remember, that you will need to bring your own ammo, especially if your rifle is chambered in exotic caliber.

Of course, there is a place for shotguns in combat but they usually bought for self-defense against looter and criminals. You know, it’s difficult to call a Police during a war. They also can be used on checkpoints.

Equipment that is most in demand:

Several other things that most shooters didn’t have on their guns are slings and sling swivels. Most of the shooters which bought guns for home defense or recreational shooting usually don’t have a sling. But it is the must have if you use your shotgun for combat. It is simply impossible to hold your rifle in hands all the time. They are inexpensive but really make your life easier.

Red Dot sights, Optic Sights and irons sights are in high demand too. You cannot use your gun without sights, that’s obvious.

Red Dots are perfect for short distances (up to 200 meters). For example, Aimpoint is a really popular choice because they are reliable and can withstand heavy use. They also simple to use and can work for thousands of hours.

Optic Sights (1-4, 1-6, 1-8) are really good choice for the AR-15 if you want to be able to hit the target at longer distances. Some shooters even install both Red Dot and Optic sights to switch faster between targets.

Iron Sights for those who cannot find better sights in stock or as backup sights. Backup sights are really good idea for any combat rifle and it is good to know how to use them effectively. But remember that iron sights won’t help you much during the night.

Night Vision and Thermal vision sights are much more expensive but they give shooters huge advantage. That’s why everyone wants to get them. They are really expensive and you need to spend some time to understand how to use them.

One more thing which everyone is trying to get is a suppressor or at least flash hider. Fancy muzzle brakes are taken out of rifles because of several reasons. First reason is a sound blast; second reason is a big flash. Blast won’t be welcomed by your fellow soldiers and flash will reveal your position.

Some shooters install flashlights which also useful but should be used carefully. Accidental activation may result in fire in your direction.

Range finders are good tools for use with sniper rifles or when you need to know distance to a target. Make sure you have a good one which enables to calculate range on a long distance.

Binoculars and monoculars are good for observation. Thermal or night vision monocular is even better because it can be used to detect enemy during the night. Just make sure you don’t use IR flashlight because enemy will see it too.
And don’t forget that attachment rails, risers and other accessories will be really difficult to find.

That was a short article about guns and gun accessories during war. Don’t hesitate to send any questions you may have. Next article will be about protective equipment, clothing and accessories.

You can support Ukrainian Armed Forces using the following information:

You can help my family using Patreon website (I have added several additional levels of help but you can choose any of them):