The original Remington 870 shotgun was designed in a way that allowed the shotshell to get jammed between the carrier and the bolt. If you tried to remove the shell, it would be a rather difficult process. If you ask anyone who used Remington 870 shotguns before the 1980s, they’ll tell you that it required a user to disassemble the shotgun. Don’t do what a lot of gun owners do and just slam your shotgun onto a hard surface because that will damage the action bars.

Of course, the older Remington 870 model did not jam all the time. But as the gun continued to get used a lot, the shell stops had a tendency to loosen or the shell would not be seated properly inside of the magazine tube. Once this happens, a shell may come out of the magazine tube at any time, causing it to get stuck in between the shell lifter and the bolt’s bottom. The end result would be a jammed shotgun since the bolt would likely be near the battery.

This problem was really ignored for a long time until law enforcement shotguns were getting too old and new police recruits were not sure how to handle them. While Remington was only willing to modify the shotguns used by law enforcement, they said that their recreational shotguns didn’t have the same problem. Eventually, they were proven wrong.

The Flexitab system contains a carrier with a notch shaped like a “U” on the bottom, a slide assembly with side clearance cuts, and a modified bolt which is notched at the bottom. 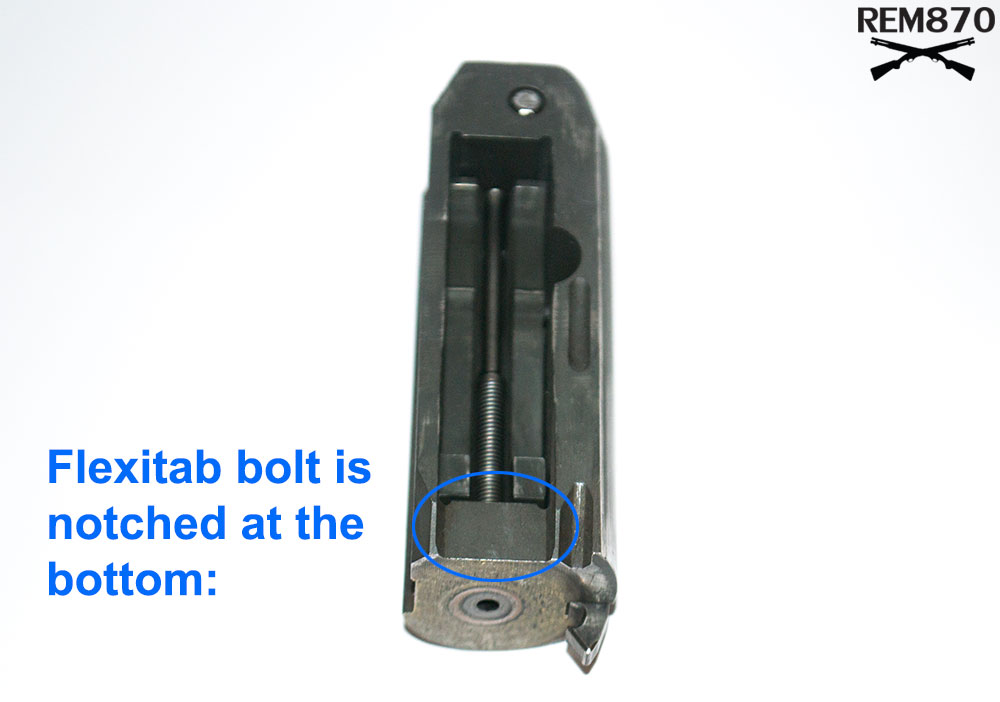 Remington 870 Flexitab bolt is notched at the bottom 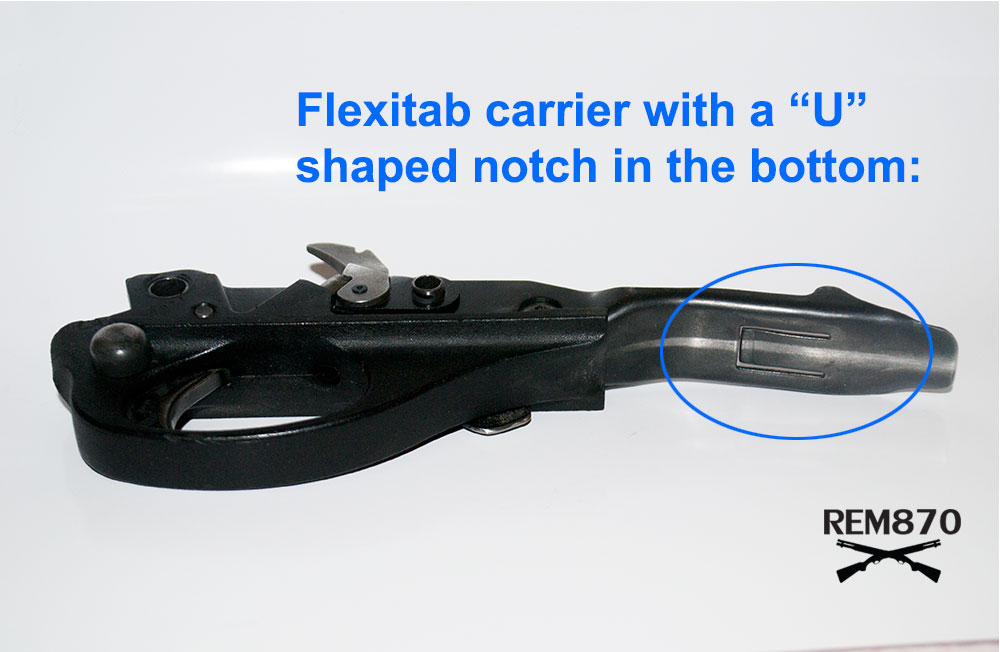 Remington 870 Flexitab Carrier with U Notch 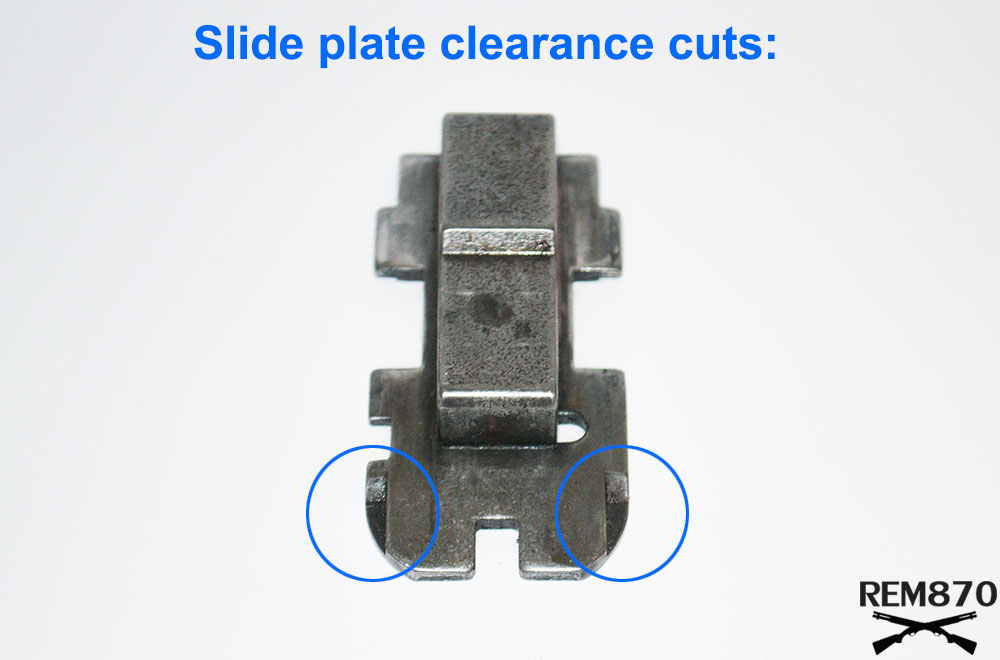 If you are trying to get experience with working on Remington 870s, you should learn about the Flexitab system and its parts and guns. Those with an old Remington 870 that want to upgrade it should search online for the proper carrier conversion kit which features the right parts for the upgrade.

If you install the Flex Tab conversation kit then you can solve issues with the shell without having to slam your weapon onto anything. The Flex Tab kit contains three special parts that work together; the breech block assembly, the slide assembly, and the carrier assembly. All you need to do is replace the older parts of your Remington 870 Wingmaster/Express shotgun with these newer parts from the Flex Tab kit.

The Remington 870 Flex Tab Conversation Kit is made for the older versions of the shotgun. If you own a standard Remington 870 Wingmaster/Express shotgun, especially an older one, then you will need the Flex Tab conversation kit in order to turn it into a weapon that is suitable for defensive purposes. Now this doesn’t necessarily mean that you have to use the weapon for home defense or self-defense. But the importance of this conversation is so you can prevent the slide action of the shotgun from binding up while you’re rapidly firing and pumping the weapon. You see, the Remington 870 contains two action bars which are made to prevent these binding problems. That way, you won’t have shells slipping out of the magazine tube as you pump the forend quickly.

Any experienced user of a Remington 870 shotgun knows how frustrating it can be when you have a shell slip out of the magazine tube and get stuck in between the slide assembly and the shell carrier. Once this happens, it limits the functionality of each part of the weapon. Since the shell carrier is responsible for lifting the shell out of the magazine, that means it won’t be able to do this if another shell is wedged in front of it. This also means the slide assembly won’t be able to move the bolt so that another shell can enter the chamber. As a result, you will have to spend extra time removing the shell that is stuck between these parts before you can fire your weapon again. If you are in a life-threatening situation, then this could be a very dangerous thing to have happen to you.

Don’t do what a lot of gun owners do and just slam your shotgun onto a hard surface because that will damage the action bars. Fortunately, if you install the Flex Tab conversation kit then you can solve these wedge issues with the shell without having to slam your weapon onto anything. The Flex Tab kit contains three special parts that work together; the breech block assembly, the slide assembly, and the carrier assembly. All you need to do is replace the older parts of your Remington 870 Wingmaster/Express shotgun with these newer parts from the Flex Tab kit. You’ll know if your shotgun contains the Flex Tab assembly because the carrier assembly will contain a cut that is shaped like a “U.” A lot of the newer versions of the Remington 870 Wingmaster already have the Flex Tab conversion kit installed into it. So, just look for that “U” shaped cut to determine if your particular version of the Wingmaster has it or not.

If you are interested in purchasing the Flex Tab conversation kit, it can be purchased directly from Remington themselves. However, if you are not affiliated with any law enforcement agency then you won’t get as good a price as the average police officer would. For the Remington 870, just research part numbers 93339 and 93340 to find the conversion kits on the Remington website. The only difference between these numbers is that the 93339 contains the black-colored bolt and the 93340 contains the chrome-colored bolt. You should see these conversion kits priced anywhere between $110 and $150.

Now if you are an experienced weapon person who knows how to personally make modifications to gun parts, then you may not want to waste the money on purchasing a conversion kit. All you really need to do is modify the carrier assembly that is already in your Remington 870. The main tool you’ll need to do this with is a Dremel cutting wheel. First, remove the carrier assembly from the Remington 870 so that it is separated from it. Now, take the Dremel cutting wheel and start cutting the carrier assembly from its center. You’ll want to make a slot cut that is 3/4 of the carrier’s length in both directions and ¼ inches wide. Again, only do this if you know what you’re doing. Otherwise, just save up the money to purchase a Flex Tab kit.

Chances are that if you purchased your Remington 870 Wingmaster/Express sometime between the mid-1980s and now, then it already has the Flex Tab conversion kit installed. If you are a law enforcement officer who is issued any Remington 870 shotgun, you also don’t have to worry because all Remington shotguns issued to police officers and the military of these conversion kits installed in them. But if you are a police officer who owns an older model of the Remington 870 in your personal collection and you want to purchase the Flex Tab conversion kit, you can get it for a cheap price if you simply provide your credentials to Remington. Military officers can do the same thing as well. Just go to www.remington.com and contact their customer service department to find out more about this. 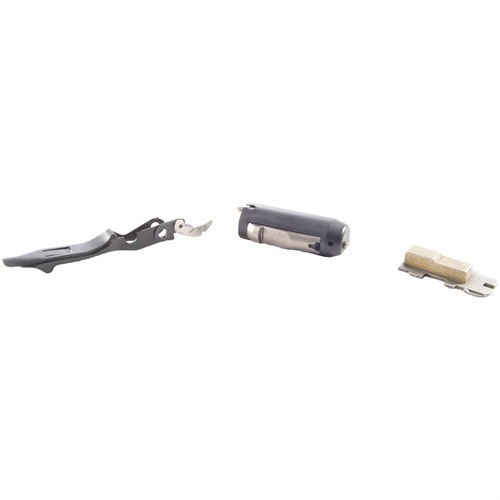 Remington 870 Carrier Conversion Kit, Flexitab makes shotgun more reliable and enables you to clear a jam. This is very important in tactical or home defense situation.