Thanks to Eric for sharing his customer service experience with Remington company. 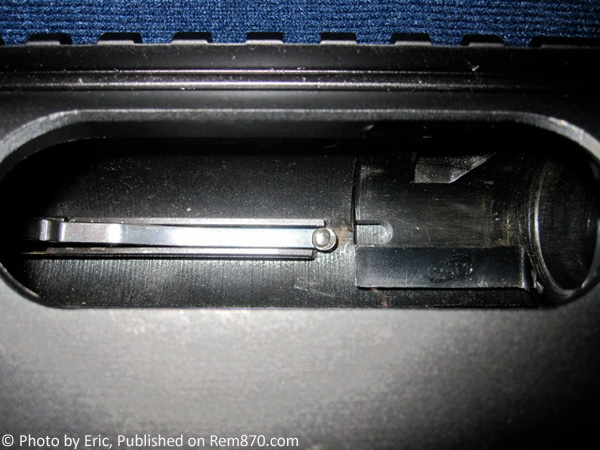 The ejector on my new Remington 870 Tactical broke after only about 200 rounds. Vitaly helped me to diagnose the problem.

He sent this very helpful email advising me of what I needed to do.  Since I’m a new shooter, I felt like this repair was a bit over my head, so I called Remington Customer Service.

I called the customer service number and told them about my problem. I believe the gun has a 2 year warranty. I had not sent in my warranty registration card, but they were glad to help me anyway. He told me to send it to the nearest of only 7 or 8 Remington Authorized Repair Centers (RARC). This was Paducah Shooters Supply in Kentucky. He gave me their address, advised me to ship via UPS, gave me some packing directions, and said that they usually have a quick turnaround of 1-2 weeks. I printed their service form from the website, put all the original parts back on the gun, except for removing the XS front sight and breach choke out of concern for those parts being lost during the repair. I shipped it in the original box, but wrapped it with a padded brown wrap to disguise the identity of the package.

They received the gun on December 6, 2011. It turns out that the repair took about one month. I got it back on January 6, 2012. They decided to replace the whole receiver, and it took a few weeks for Remington to send them a new one. I ended up getting a new serial number. I was also surprised to see that they replaced the XS front sight and breach choke. The sight seems to fit more snugly than the first one which was loose fitting and frequently slid out during shooting. The gun was still in excellent condition after the repair. There were only a few minor scratches around one of the screws on the receiver. They test-fired the gun, and the ejector apparently functioned well.

They hid the cost details on the invoice, but this whole repair was done at no expense to me except for shipping the firearm to the repair center. I’ll look into sending my previous XS sight and choke back.

All in all, I am very pleased with Remington Customer Service and the work of their Authorized Repair Center and look forward to shooting more soon, especially after moving to SC and being able to shoot on my own land now.