Successful bidders and the Remington businesses they are buying:

Remington Outdoor Company has been manufacturing firearm products for close to 200 years now. Remington is best known for manufacturing handguns, shotguns, rifles, and ammunition for a variety of customers, including hunters, military, and police. Cerberus Capital Management is the company which currently controls Remington. It was recently announced that Remington filed for bankruptcy.

The company filed in a Delaware Court less than a week ago. The filing includes a revised plan for getting rid of the $620 million that Remington owes. This would help them payback most of the money they owe to creditors, but they will have to give a majority of the ownership interests in their company to certain lenders. Two of the big lenders here include JPMorgan Asset Management and Franklin Resources Inc.

Update: here is the letter which states that Remington Outdoor Company is OK: 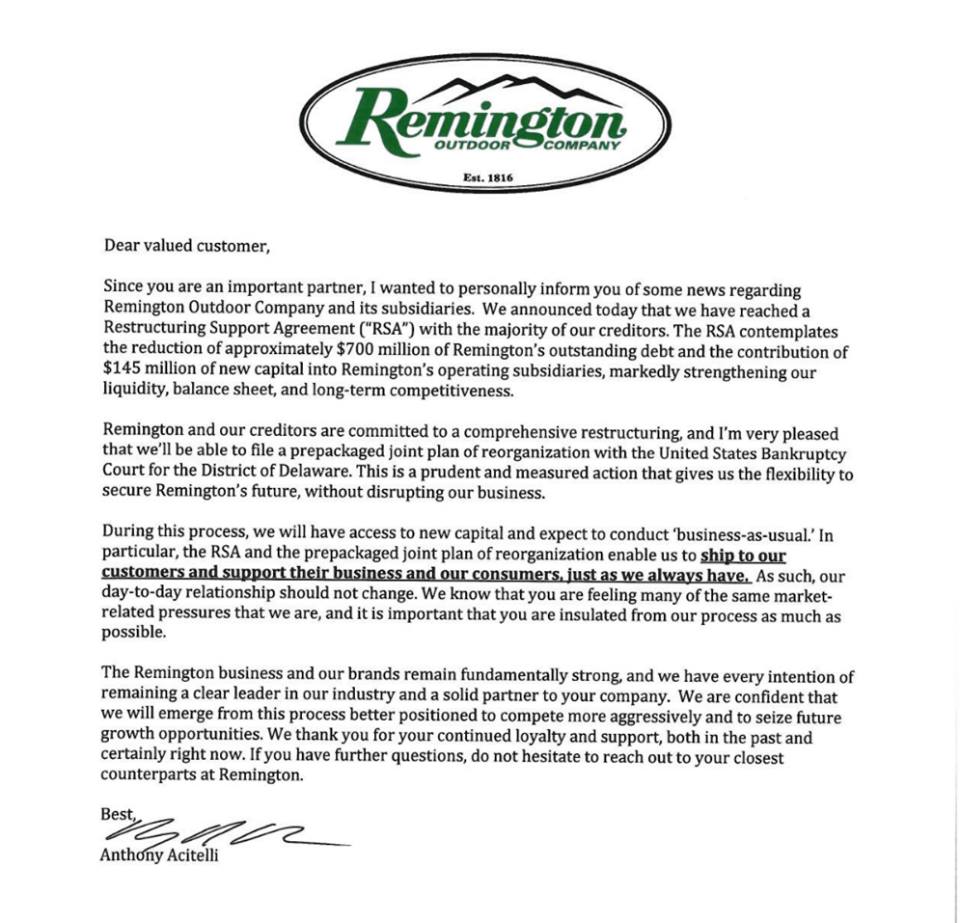 According to Remington’s court filings, their financing efforts were jeopardized because there were certain lenders who were hesitant to lend money to a gun manufacturing company.

Remington went to as many as 30 different lenders and got turned down each time. Most of them claimed to be reluctant to strike a deal, according to a financial adviser named Lazard Freres. There were 8 lenders that wanted to discuss things further, but they eventually backed out. The closest they got to success was with an outside lender that said they would lend $100 million as a bankruptcy loan. However, they changed their mind before the deal could be closed.

Remington already suffered financial hardship after Donald Trump got elected President in November 2016. If Hillary Clinton had won, gun enthusiasts would have bought more weapons out of fear that she would pass more gun restrictions. Since Trump won, they had no reason to panic and go buy weapons. This hurt retailers because they had purchased a lot more firearm and ammunition inventory since it looked like Hillary was going to win. When it turned out she didn’t win, they had a lot of inventory left over that they couldn’t sell.

According to Stephen P. Jackson, who is the Chief Financial Officer of Remington, the company went under because revenue and sales had declined in 2017. Apparently, Remington had increased its level of production in 2017 because of demand that never came to be. Remington is based in Madison, North Carolina and 7 manufacturing plants in the United States with 2,700 company employees. By May 3rd of 2017, Remington hopes to receive approval for the bankruptcy so that they can restructure the company.

The terms of the reorganization are a little bit different than what was negotiated in another plan with the lenders. This was a plan for eliminating $700 million worth of debt and adding more capital in the amount of $145 million. With the new plan, $620 million worth of debt will be paid in exchange for the lenders getting ownership equity in Remington. It will cost $338 million in financing for this to be completed. There is also a $193 million loan based on assets, a debtor-in-possession loan worth $100 million, and rescue loan worth $45 million that was issued by the parent company of Remington for its various subsidiaries.

When the outside lender went back on their deal to provide Remington with a loan of $100 million, Remington went to its noteholders and term-loan lenders for a better financing deal. Remington requested the court to keep the loan feels concealed from the public.

The rescue loan will be converted through this reorganization into 17.5% worth of ownership equity for the lenders. Not only that, the loan of $100 million goes through a conversion and becomes an exit loan. As for the loan based on assets, cash will be used to repay this. Lenders of the pre-bankruptcy loans are going to receive 82.5% of ownership in the new company. The lenders of the third lien are entitled to the warrants and cash. The cancellation of the recent equity will occur.

Remington has requested to decline the standard practice of having a full schedule filed for all its assets and debts. They want the plan’s final approval to take place by May 3rd of this year.

In 2011, Remington had a setback involving a public offering that was canceled. After the mass shooting which took place at Sandy Hook Elementary School in Newtown, Connecticut, numerous investors backed away from the company because a Remington rifle was used in the shooting.

Billionaire Stephen Feinberg owns a private equity firm based in New York called Cerberus. In 2007, this firm obtained ownership of Remington and then accumulated it with debt in excess of $1 billion. Once the mass shooting at Sandy Hook occurred, Cerberus made an announcement that it was going to sell Remington. This was mostly due to its investors becoming nervous about it and wanting to back out. Unfortunately, they could not get any buyers to purchase the company.

There have been numerous mass shootings and gun violence incidents since Sandy Hook. All these killings have urged litigation to take place, some of which involved Remington. The Attorney General of Massachusetts requested information about Remington in 2016 because of numerous recalls and complaints. An investigation was being made into whether Remington was complying with the gun safety regulations and laws of the state. Some individuals have even sued Remington themselves based on the claim that their weapons were defective, or that a few of its models were willingly recalled.