The Remington 870 Express Magnum shotgun one of their more popular pump-action shotguns and is used primarily for hunting, self defense and sport shooting. In addition, it is a very common weapon used by the military and law enforcement organizations. 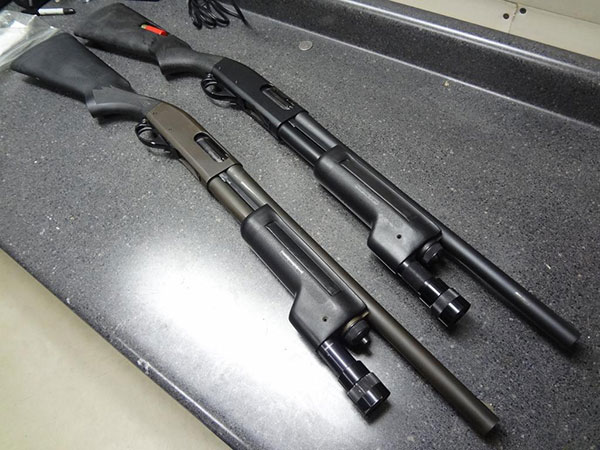 The Remington 870 Express Magnum shotgun one of their more popular pump-action shotguns and is used primarily for hunting, self defense and sport shooting. In addition, it is a very common weapon used by the military and law enforcement organizations.

The 870 itself represents the fourth major version of this particular series of pump shotguns first designed by John Pedersen with the Remington Model 10 a century ago. While the first weapon was rather fragile, it was later greatly improved with new designs by John Browning coming into play over the years that saw new versions until the 870 was introduced in 1951. The Remington 870 has been remarkably successful with over ten million sold by 2009. This marks the 870 as the best selling shotgun ever created.

By 1986, the Express version of the 870 was released to the market as a low-cost alternative to the Wingmaster line and proved to be remarkably successful. This is not only due to the lower cost, but also to many other aspects which have made the 870 Express and its advancements so attractive to individuals looking for a powerful, reliable shotgun.

This is particularly true for the new versions of the Express model, particularly the Super Magnum version which has garnered quite a bit of attention recently.

What Makes the Remington 870 Express Super Magnum Work for You

The express model is certainly not the standard version of this pump-action shotgun. In fact, this weapon offers great versatility in that it can use ¾” loads up to the heavier 3 ½” magnums while being easily interchangeable. It is this remarkable versatility that makes this shotgun so popular and practical for different targets. There is not another pump action shotgun that can rival the Remington 870 Express Super Magnum.

You can find this particular model available with the matte-finish metalwork that is non-reflective along with the hardwood stock and the fore-end that has a flat finish. This particular version offers a 28” vent-rib barrel complete with Modified Rem Choke. Overall, the Super Magnum has certainly made a powerful impression thanks to its modifications that augmented the already impressive advantages of the 870 Express.

Remington 870 Express Magnum Features
There are a number of features that this particular Remington offers which only adds to its remarkable value and versatility.
– Twin Action Bars: Provides for a smooth, non-binding action that works time and time again
– Strong, Durable Receiver: Milled from a billet of steel
– Well Noted Accuracy: A legendary reputation for its ease of aiming
– Vent Ribbed Barrel: Rem Choke version
– Available in 12 gauge

Plus, the Remington 870 Express Magnum price is low and affordable, reflecting a more common touch that has endeared it to its many owners. This is a highly versatile, effective and powerful weapon for self defense and has earned its place in the military and law enforcement circles for its performance, reliability and durability.
There is little doubt that the Remington 870 Express Magnum is one of the best and more valued 12 gauge shotguns on the market today.