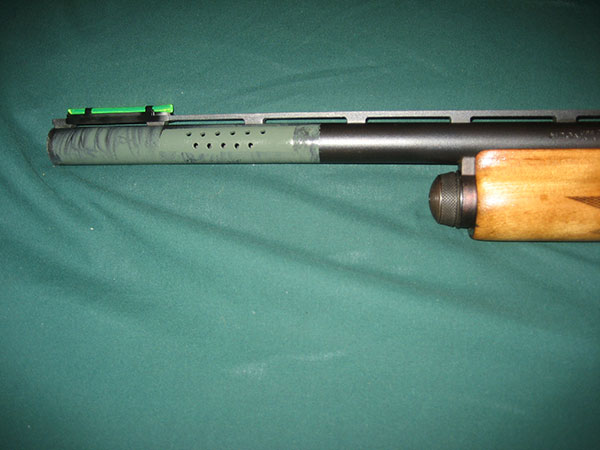 Porting is simply adding holes to the barrel of a firearm near the end of the barrel. In most cases, the reason this is done is to reduce recoil and the resulting muzzle jump. Porting is also used to reduce muzzle flash but as many experts point out if, the flash is not at the muzzle it comes out the “port” holes. Porting can be done on essentially any barrel and many shooters will port the barrels of their shotguns to reduce recoil.

ATTENTION: Porting should only be done by a professional gunsmith or by someone, who has the proper tools and experience.

If done properly and close to the end of the barrel there does not appear by all accounts to be any reduction in muzzle velocity. However, the exploding gases are escaping through other than the intended method designed by the manufacture. Some of the hot gases (energy) of course will exit the top of the barrel through the holes instead of entirely behind the round as it exits the muzzle.
Some shooters claim that the reduction in recoil or even the perceived reduction helps them maintain target discipline. It is easier according to some to acquire/reacquire the target after firing if their barrel is ported.

Because the gases exit near the front sights, the sights will become fouled and must be cleaned regularly. Stainless steel or nickel plating will show the fouling as well. The weapon will be louder because of the escaping gases through multiple holes. This would likely only be a problem in a home defense situation where you are firing in a confined space without the benefits of ear protection.
The flash of hot gases exiting the barrel along your line of sight can have an impact on your night vision if firing in a low light situation. Light of course will cause the eye to block the intense light, thus reducing your ability to see in low light. Muzzle flash is not a problem if shooting in daylight.

There is some debate on the Internet concerning barrel porting and the dangers to others near the ports or the possible flash/flame creating injury or damage. Keep in mind many manufactures offer factory porting and you can buy several models of handguns, rifles and shotguns with the barrel ported from the manufacturer.
There is an Internet article that describes a possible scenario where porting a revolver barrel could seriously harm your passenger, if you are firing across them out the passenger window. In theory if someone’s face was just inches from the barrel when fired the hot gases and gunpowder residue might cause injury (powder burns). This scenario is highly unlikely however and you would have to assume for the holes to cause injury that all of the holes where all on one side of the barrel instead of on top of the barrel.

Being close to the muzzle/barrel of any firearm when fired whether ported or not is dangerous and will cause injury from hot gases and residue. The flash from a firearm can cause a fire in some circumstances, but this is very rare occurrence. It is assumed that anyone near the muzzle of any firearm you fire is someone you have marked as a target.

There does not appear to be any inherent risks to using a ported barrel. There does appear to be benefits however in the reduction of felt recoil and muzzle lift. It only makes sense that if you give the gases more escape routes the recoil will be reduced because the gases are not wholly concentrated in one place.

For those of you wondering about reduction in energy by releasing the gases through the portholes
Will this have an effect on the cycling of the weapon? The energy from the propellant has already performed its duty by the time the gases have reached the portholes. This conclusion also allows for some discussion on how much felt recoil is actually reduced. The energy from the shell is utilized at the forcing cone, which is what allows the energy to be used to cycle the weapon.