These shotguns are a blast to shoot they have very little recoil and I can shoot them one handed with ease. The way they are balanced also makes them easier to shoot and maneuver in tight quarters as well. These guns are ideal for home defense, military applications, police, executive protection ,vehicle deployment, or room searches because of their size.

Yet they have the full size barrel and extra rounds in it to get the job done. No matter if it is up close or at a distance. These guns do not require a tax stamp and they are only 28” in length overall. The sawed down 14” entry 870 is still longer and holds less rounds then this conversion. These guns are only slightly longer then a 12” barrel pistol grip shot-gun and you do not have as great of control with the pistol grip gun as you do the Bull-pup gun.

These guns are also nice for hunting because in the brush they take up less room and do not get snagged on the brush and limbs as easy as a full size 870 does. If you are in a deer stand again this gun takes less room to swing the gun and shoot it. I had a green 870 bull-pup shot-gun set up with a scope and a slug barrel that I posted on the Rem870.com blog site in the past.

The other nice fact about these builds is that you are taking the well-respected 870 Remington 12 Gauge shotgun that everyone is familiar with and using it for the conversion. Almost every police Department has carried the 870 shotgun for years because of their reliability and ease to shoot. The bull-pup conversion requires very little training to convert you from the longer gun to the shorter more compact bull-pup
shotgun.

Another important fact is that they will accept almost all Ar-15 accessories and you can put on any Ar-15 grip that you want. They also have the Ar-15 safety and a safety trigger set up like the Glock for added security.

Shown above is an 18” barrel 870 Remington Express 12 Gauge shotgun with an 18 ½” barrel and a Hogue grip. Behind it is a Hawk full length gun the 870 clone with a 18” barrel for comparison to the size reduction by doing a bull-pup conversion on your shotgun.

Below is the other side of the shot gun showing the ar-15 safety and lower trigger and grip. As you will note this shot-gun comes with upper, lower and two 45 degree side rails. In the picture you can also make out the slide release

Shown below are other examples of some of my 870 Bull-pup builds showing different colors that you can paint them 1st one Desert Tan. 2nd one Army Green. Both of these have the factory Ar-15 grip on them.

Below is a picture of the kit before you start. I use the Bull-Pup Unlimited kit to build my Bull-pup Shotguns with. 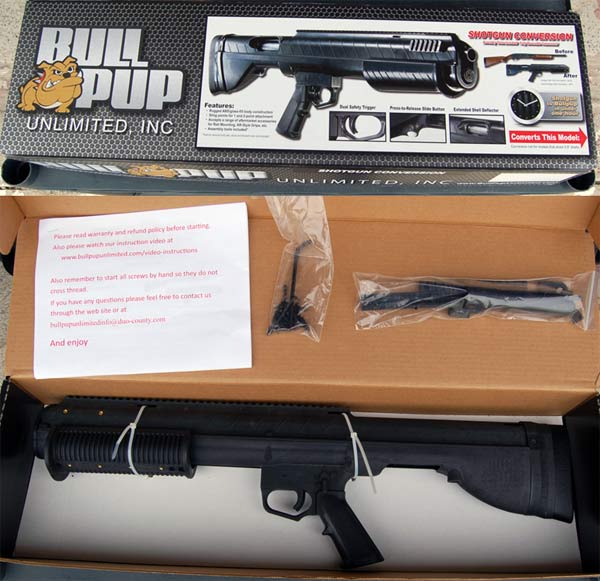