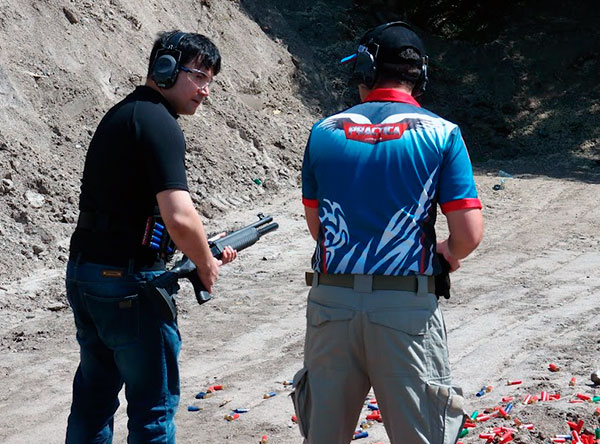 A situation where you would need to work the pump action on your shotgun one-handed would include an injury to your arm or hand or if you are helping someone to safety. You will need to cycle the weapon and fire the weapon one-handed. It does not work as it does in the movies and some have practiced the manipulation with a loaded weapon resulting in a few holes being blown in the roof of garages and hunting lodges. Practice with an empty weapon because the only time you would need to cycle the pump action is if you are in a life-threatening situation. The weight of the weapon will be less of course without shells loaded. Practice and become proficient with both hands not just your shooting hand. You do not know which hand or arm will become injured.

Nearly all pump actions are a back and forward motion of the forend to cycle. The forend is connected to the bolt by one or two arms. Having two arms mean a more precise cycling and reduces binding. It also makes cycling with one hand easier.

The forend is not centered on the weapon so the weight is below the pump action, which means the weight has to be picked up and then released so the action can cycle by holding the forend. The weapon has to be picked straight up and then jerked to some extent to move the pump action back and then forward. This is accomplished under normal circumstances by the non-shooting hand grasping the forend and racking back then forward.

Grasp the forend with whatever hand you want to start with. Try to move the action by moving your hand up and down. Once you get a feel for the movement jerk the weapon to rack the action back then forward. Both the back and forward actions will have to use the weight of the weapon to move the pump action through its cycle. This action is made difficult because the pump action has to move back first and then forward. It is a downward motion with the hand and then upward motion to bring it back in the other direction.
Another method would be to prop the weapon against your hip to rack the pump. This will require some practice as well because once the weapon is against the hip you have to keep the stock from sliding off your hip when pulling back. It would be extremely difficult to place the weapon stock against your stomach to perform this move.

You can place the butt on the ground/floor and balance it enough to work the action. This too does require practice because the weapon will tend to roll away from you as you pull down. Keep in mind you are only using one hand to perform this maneuver and with an injured limb your balance will be off.
The movies show the individual walking or running and cycling the pump action. This would be difficult to perform while moving quickly. If the action is, loose from wear it may slide much easier. Some have stated they feel one-handed manipulation can damage the action. This is not something you want to worry about in a firefight. However, excessive practice with the weapon may wear the action faster than normal not to mention the wear and tear from all the times the weapon will be dropped during practice. 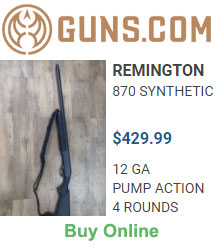