Looks like Remington decided to make the competitor of the Mossberg Shockwave shotgun. But Remington 870 Tac-14 don’t need adapters to accept short shotshells.

Everyone agrees that shotguns are great for home defense. They are easy to load, easy to aim, and easy to fire. They don’t require great marksmanship skills to be effective. They don’t usually penetrate walls or doors, a problem for high powered rifles used for home defense. But the shotgun you use for trap and skeet shooting is long and unwieldy, and most don’t accept accessories like flashlight attachments. The solution to this problem was to remove the lanky buttstock and add a pistol grip to the shotgun. This made them much easier to handle in tight spaces. Since you can fire a shotgun effectively from the hip, a long buttstock is not needed for aiming.

In 2017, the next evolution of the home defense shotgun came along with two models, the Mossberg Shockwave and the Remington 870 Tac-14. Both the Mossberg and the Remington models use a grip style called a birdshead grip. They both use one manufactured by Shockwave Technologies called the Raptor Grip to shorten the overall length and make them great for close quarters defense. 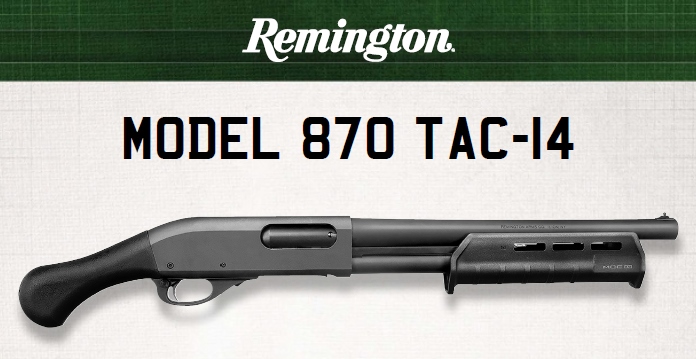 Because both the Mossberg Shockwave and Remington Tac-14 are manufactured directly from the factory with a birdshead grip and not a buttstock, they are technically not shotguns, at least according to the Bureau of Alcohol, Tobacco, and Firearms. According to federal law, a shotgun is a weapon that has been designed or redesigned to be fired from the shouldered position. Since the Shockwave and Tac-14 were never designed with buttstocks, they are not technically shotguns (even though they are.) Although they are significantly shorter in overall length than a traditional shotgun, they do still have to be 26 inches in overall length or greater to avoid being classified as Any Other Weapon by the ATF. AOW is the category that sawed-off (short-barreled) shotguns fall into. AOWs require a tax stamp and a long waiting period to purchase.

Now let’s take a closer look at the Remington Tac-14.

The Remington Tac-14 is the traditional Remington 870 shotgun that we all know and love, with some updated hardware. Like I’ve mentioned before, it comes with a Shockwave Technologies Raptor Grip instead of a pistol grip or buttstock. The Raptor Grip is rounded at the end and tactile, allowing for a sure grip. Because it doesn’t have a buttstock, the Tac-14 is meant to be fired from the hip. The non-firing hand falls on the pump action, which is housed in beautiful Magpul M-LOK furniture. The M-LOK system is great for adding accessories such as a flashlight attachment to the Tac-14. The pump itself functions flawlessly, always smooth and never catching or hesitating. The only negative that can be found is that the Magpul handgrip isn’t as textured as the birdshead grip, and therefore is more difficult to hold on to while working the pump action. In a rapid-fire scenario, this could result in the non-firing hand to slide in front of the barrel as the trigger is squeezed. Remington’s competitor, Mossberg, has solved this problem by adding a velcro strap that closes across the top of your non-firing hand, securing it in place. It’s secure enough to keep your hand from moving during the pumping action, but loose enough that you can remove your hand if needed. Hopefully Remington can address this issue in subsequent models of the Tac-14. 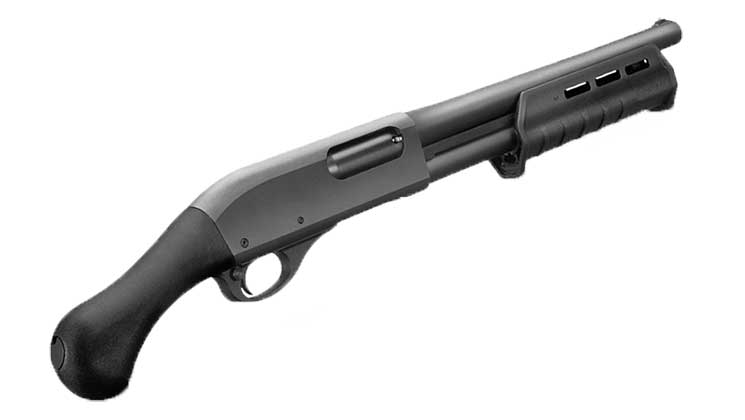 Because of it’s short overall length, the Remington Tac-14 makes a great home defense weapon. The 4+1 capacity is more than enough to take out a threat in your home. (One tip is to load your shotgun in this order: Birdshot-Buckshot-Birdshot-Buckshot-Buckshot. That way, your first round of birdshot will only wound the home invader, hopefully eliminating the threat. If they still present a threat after taking a load of birdshot to the face, the buckshot will almost certainly stop them.)

Like I mentioned before, the function of the pump action is smooth and flawless. The position of the thumb safety is intuitive, and the birdshead grip feels natural in your hand. The 12 gauge does pack quite a kick without the assistance of a buttstock to deaden it, so controlling the barrel for follow up shots is important.

With a point-and-click weapon like a shotgun, there isn’t much need for magnifying optics, and the Remington Tac-14 isn’t pre drilled for any mounts. It has a simple bead sight in the front, and no rear sight to speak of. It would be nice, however, to have a rail on top for a red dot sight. But that’s a minor concern.
Conclusion
The Remington 870 Tac-14 and Mossberg Shockwave have filled a critical home defense niche that most people used a traditional shotgun for until now. They are reliable, affordable (under $300), and easy to operate. They are perfectly designed to do the job they were made for. With the Magpul M-LOK front handguard, you can attach accessories like a flashlight, making the Tac-14 even better.

If you’re in the market for a new home defense weapon, don’t overthink it. Go with the tool made specifically for the job. Trust the Remington 870 Tac-14 to defend your home and your family. I do. 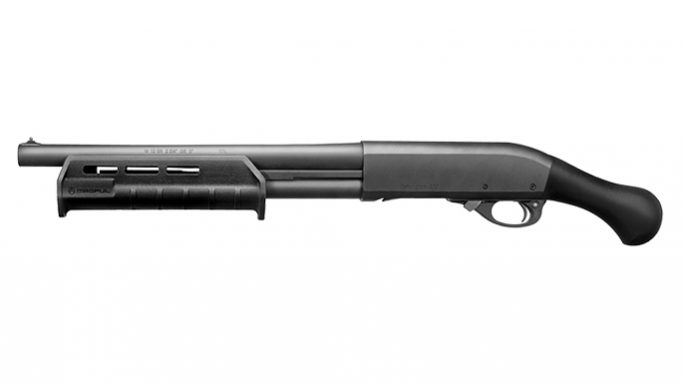 This shotgun has Magpul forend and Shockwave Raptor pistol grip.

It is a good idea to install a one-round magazine extension, oversized safety or other upgrades from the Must Have Remington 870 Upgrades List.

You can buy Tac-14 on Brownells