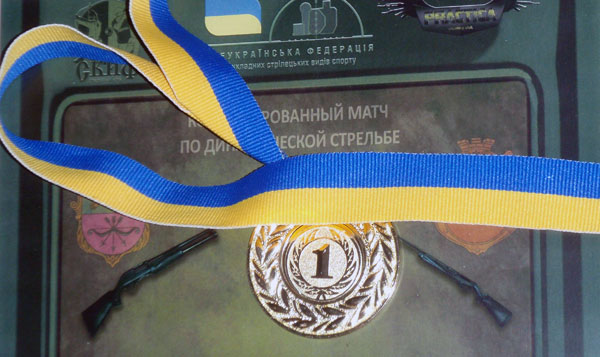 Upgrading a Shotgun for the Standard and Standard Manual Division 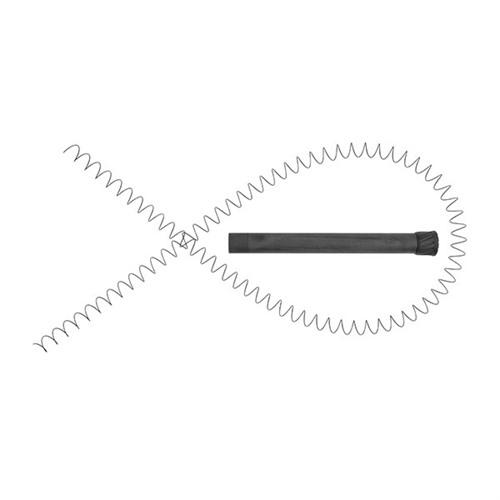 Something that is often overlooked by new shooters is the magazine spring. A good magazine spring is inexpensive but extremely important to have! I cannot stress how important is it. Many problems with feeding are often caused by worn out magazine springs, or ones that are too short.

The best springs for competition shotguns with extended magazines are made by Nordic Components. They come in 45-inch or 50-inch length and need to be cut to a proper length. Follow the manufacturer’s instructions but remember, it is better to have a spring that is a little longer. When your magazine tube and follower become dirty, a weak spring will not have enough power to push rounds and this will cause a malfunction. Clean your magazine tube and you will see how much dust and dirt there is.

Sometimes you have just one round and one target left, and sometimes you miss it. This would be the worst-case scenario because it will take about 4-5 seconds to get a round from your belt, load it into a chamber and then make a shot. That is a situation where Matchsaver can help. This is one special shotshell holder which can hold a round on the right side of the forend. It is very easy to just grab a round and drop it into the chamber of your shotgun. It can be used on both semi-auto and pump-action shotguns. This is a very good and inexpensive accessory that can save you several seconds in a competition, which makes all the difference in the world. Sometimes just one second can make the difference between who gets first and second place.

This is one of the must-have upgrades for the Benelli M2. It enables the shooter to load their shotgun easier by using load-2 or load-2 methods.

Grip Tape
Grip Tapes is an adhesive rubber-like sticker that can be attached to the forend for a better grip. Many shooters started using it for a more positive grip. It doesn’t cost much and it is very useful and will last for months.

Popular Open division shotguns like the Vepr-12 or Saiga-12 require modifications and tune-ups for more reliable work. They are rarely good to use for competitions right out of the box. You will need to have a lot of tests and work to make them run smoothly.

And all three goals are strongly interrelated.

Upgrades to the ergonomics are the first things shooters do. They install telescopic stocks, pistol grips with palm shelf better trigger control, and tubular forends. All those upgrades enable the shooter to have a better grip and shooting stance while having better control over their shotgun.

Also, shooters solve issues with the loading and reloading of their shotgun by installing wide flared magwells, left side charging handles, extended magazine release, and etc.

Usually, all the upgrades above enable the shooter to compete on a pretty good level and achieve better results in competitions.

Then, shooters start working on having better reliability with their shotgun. They need to polish all the moving parts of the shotgun, cut the recoil spring, and polish the chamber.

The recoil of a 12-gauge shotgun is pretty hard and you need to reduce it to be able to shoot fast. The first thing that helps to reduce recoil is the muzzle brake. Modern muzzle brakes are very effective and make the life of shooters much easier. Usually, shooters don’t know what else they can do to reduce recoil.
But you can reduce recoil, even more, by using regulated gas blocks, gas pistons of different size and shape, experimenting with springs and even the gun oil you use on the spring. This is very painstaking and custom work which should be done by a qualified shooter or gunsmith only.

Generally, you will need a semi-auto shotgun with a long magazine tube, extended magazine spring and muzzle brake. I know that many shooters think that Finnish muzzle brakes are the best. They are pretty expensive (EUR150) but reduce recoil very well.

All other upgrades are similar to the Standard division: oversized safety, charging handle and bot release button.
Many shooters cut their stock to have longer magazine extensions. You remember from the first article that overall length in the Modified division is limited.

Ammo Belts of a Practical Shotgun Shooter in Standard, Standard-Manual and Modified Divisions

The first thing that you will need (except for the glasses and earmuffs which are a pretty big topic) is a belt where you have your ammunition and which enable you to load your shotgun fast. The shotgun has just 9 rounds to start (in Standard and Standard-Manual Divisions and 14 in Modified) and you will have to load it very often. Loading is about 50% of the success that you get in practical shotgun shooting. That is why it is extremely important to have equipment which enables you to load your shotgun fast.

Times of bandoleers and shell caddies are gone. Now everyone uses Load-2 or Load-4 techniques. Most shooters switch to Load-4 because it gives them a lot of advantages.

The most popular Load-2 belt is made by a Czech company named Chameleon-Fabrics, and their price is about $135. It was an extremely popular belt but now many shooters switched to the Load-4 belt instead. There are many belts which enable the shooter to use the Load-quad method. Some of them are simple like the Russian Z-Load belt and some are very sophisticated which use magnets to hold shotshells such as the Finnish King Competition belt or British Ezload belt. Those belts are sold as a complete system which holds between 28 and 40 rounds. There are also numerous companies which also manufacture ammo holders such as Taccom Quadloads, Invictus, Safariland, Double Alpha academy and many others. They enable you to build a belt with separate 4 or 8 rounds holders. I think that they fit better with the 3-Gun where you need to have a compact shell holder. If you are going to use a belt for practical shotgun shooting only, then get the belt which holds 28-40 rounds in one block.

And yes, the minimum number of shotshells that I recommend to have is 28.

Open Division shooters need to have a wide belt which is capable of carrying pouches with heavy magazines. You need stiff belt that can be found in many shops which sell shooting accessories.

But again, you need to experiment and find what will be good for you.
There are many companies that produce belts and magazine pouches, so you need to choose what is available in gun shops.

Choke is a constriction. You can read more about them in article: “Shotgun Chokes Explained” 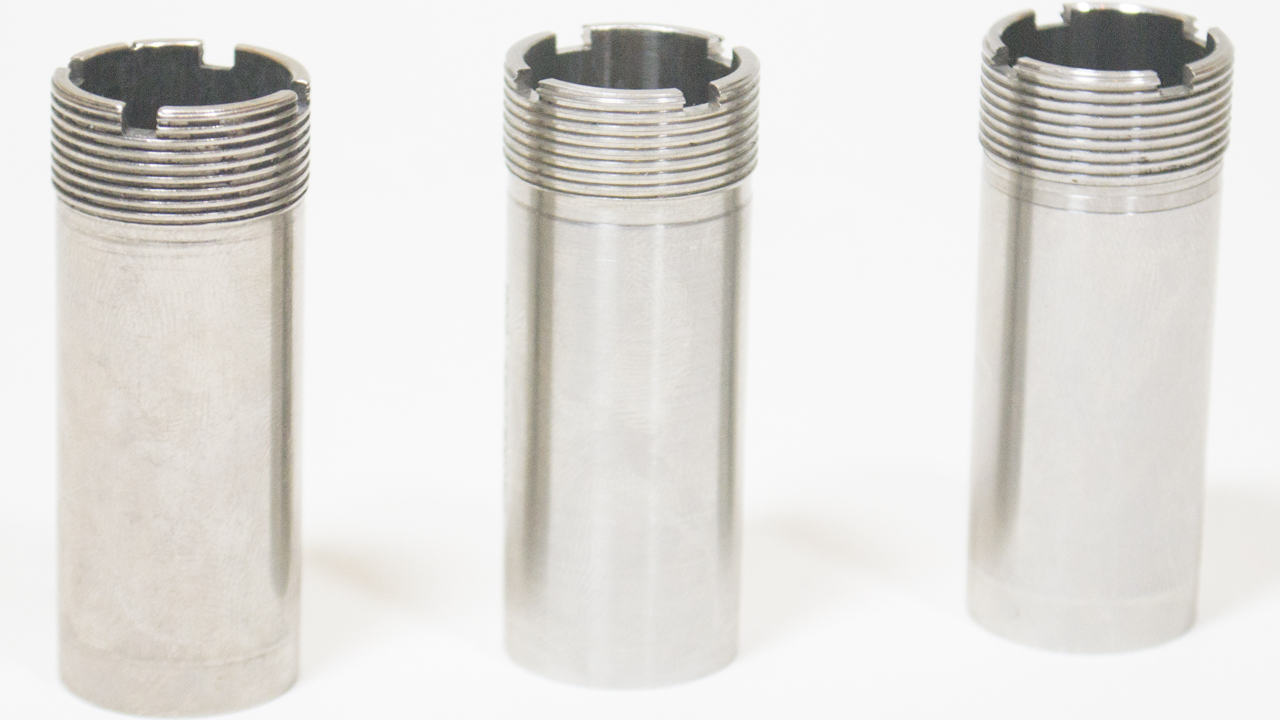 Let’s speak about chokes in practical shotgun shooting. Not all shooters were using chokes just several years ago. But now they must be used because the stage design is very different and there are a lot more penalty and distant targets.

You need to understand that choke selection also depends on ammo (will talk about it in the next article) and barrel length. The shorter the barrel length, the more constricted choke you need.
You will mostly need Cylinder and Modified chokes. Some shooters also use Full and Improved Cylinder chokes.
Cylinder choke is for stages without penalty targets, targets on a long distance (15+ meters) and heavy targets like poppers. It is also very good for clay targets.

Improved Cylinder choke is sometimes used with close poppers. But there is not much of a difference between Cyl and
Imp Cyl.

Modified choke is one of the chokes that you must have in your kit. It is good for stages with a penalty, distant and heavy targets.

Full choke is used by some shooters on stages with many penalty targets.

You are going to compete in many different matches with different stages and you need to be ready for any conditions. There are must have items which you should carry in your range bag/cart:
-Shooting glasses
-Earmuffs
-Kneed pads
-Gloves and spare gloves
-Anti-fog cloth or liquid
-Spare parts
-Multi-tool
-Gun oil
-Cleaning kit
-Packable waterproof jacket and cap, umbrella (good, but optional)
-Compact chair
-Water (minimum 3 liters in summer) or thermos in winter
-Snacks (nuts and dried fruits in summer, chocolate in winter)
-Towel to wipe hands and sweat (especially in summer)

This list of equipment will be described in details in the next article.

Thanks to Alexander Shorvayev from the Molot-Open Team for their information about Open class shotguns.