Remington 870 Disassembly and Reassembly with Illustrations and Video 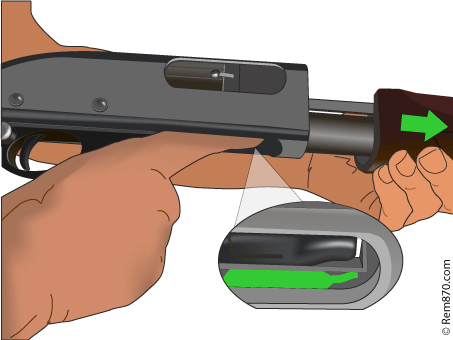 This post is based on a chapter from the Remington 870 Guide eBook.

You may need to disassemble your shotgun in the following cases:

• For the first cleaning of your Remington 870, due to the preservation grease, right after purchase.
• For regular cleaning and maintenance of your shotgun.
• When checking your shotgun’s barrel to see if there are any obstructions inside.
• For transportation of a shotgun, disassembled in a case or small bag.
• For storage of a shotgun, disassembled in a case or small safe.
Disassembly
Never forget about the safety rules when disassembling a shotgun. There are known cases when carelessness during the disassembly of a gun was the cause of accidents.
WARNING! Check the ejection port, chamber, and magazine tube to make sure that there are no shells in the shotgun prior to disassembly.
1. Engage the safety.
2. Push the action bar lock upward and pull the forend back to open the action.
Slide the forend back, approximately halfway.

5. Pull the barrel from the receiver.

The bolt of the Remington 870 firearm is a mechanical part that is responsible for shielding the rear of the chamber when firing the weapon. That way, the propellant can burn without affecting any of the other unused shells in the magazine tube. Once the shell has been fired, the bolt moves out of the way so that a new shell can enter the chamber. This should be pretty basic knowledge to those who understand the mechanics of how a shotgun works.
When you begin to disassemble the Remington 870 bolt, you must first make sure that all the shells and ammunition have been removed from the chamber and magazine cap of your Remington 870 shotgun. This will ensure that there are no accidental firings as you proceed to disassemble it. After you have verified this, begin to disassemble your weapon by engaging the safety and then sliding the action bar lock in an upward direction. Then, pull back on the forend so that the action is open and then slide back the forend about halfway.