Lets have some pictures of your builds.

I hope to add a couple of accessories to it such as the XS Tritium Big Dot with the Ghost Ring sights, Mesa Tactical Sureshell Saddle mount (4-shell) with picatinny optic rail, Wilson Combat jumbo safety, CDM MOD-C flashlight light. Not sure which flashlight to purchase, but have found some "package deals." Would like a sling also.

Have noticed that many accessories are out of stock and some dealers aren't able to accept new orders online or via telephone since they have received a slew of orders to fill.
"Man is the only animal that blushes, or needs to..." Mark Twain
Top

Here is a dated photo of the HD firearms I've been tweaking:
S&W/Howa 3000 12-ga. Pontiac, MI PD. It now has an S&J Hardware side-saddle.
Beretta Cx4 9mm carbine. Still pretty much in that configuration. TLR-1 weapon light and Burris red-dot sight. It is mounted forward so I still have peripheral vision and it is further away from the ejection port and operating handles, etc. If the sight goes out or is not on, there are the folding BUIS.
Remington 870. It now has the EOTech IFL forend and a 4-shell side-saddle instead of the six in the picture.

I remember they were a (Japanese-manufactured?) clone of the 870 that tried to improve on the original's design somewhat. One feature they were supposed to have was a "jam-free" shell carrier (this was before Remington implemented the flexi-tab fix on the 870). Does the 3000's carrier have something like the flexi-tab, or does it use a different approach?
My YouTube Channel
Remington 870 Tips & Tricks
Shotguns 101
Top

Thanks for posting the very clear and detailed "how to" videos about the Rem. 870 Synchronizor. Great stuff!
About the Smith & Wesson/ Howa 3000: Yes, you are right.

Smith and Wesson's first Japanese-produced police shotgun was a disaster. That was the Model 916 as I recall. Basically, after that debacle, during the Bangor Punta-era of Smith and Wesson the firm decided that they essentially covered the North American law enforcement market as far as revolvers went, and that they would take on Remington for market share in the police shotgun market. The idea was to offer a sweetheart deal on the shotguns to departments that used S&W revolvers. It didn't really work, as only a handful of departments switched to S&W 3000s from older/earlier models of Ithacas and Remingtons. Of course, Mossberg was also making inroads into the shotgun market. Folks who like the 500 and 590 seem to think the shell elevator on the Remington is a significant detraction. Some people prefer the tang-mounted safeties. Nonetheless, as with anything, there is a sort of "cult following" for the Smith/Howa 3000s among shotgun aficionados. Howa in Nara, Japan built the shotguns, essentially a copy of the well-worn and time proven 870 design with one or two tweaks. The bolt and the slide arms are a bit different to my eye, possibly to keep things running with debris/dirt in the action. Everything is built heck-for-stout that is for sure. I'm not sure what, if anything, is different about the shell elevator.

You can't see it in the photo, but there is a metal badge tacked on at the bottom of the pistol grip with the number of the squad car it was assigned to. I wrote Mr. Jenkins, the historian at Smith and Wesson, before he retired and he sent me the record that it was produced in Japan in 1983 and sold in May along with fourteen others to the PD in Pontiac, Michigan. [I collect all sorts of useless information!

]. It is just a knocked-about 25-years-then-retired police "riot gun" with some coffee and donut stains here and there. Heh. Nothing special: plain wood stock, cheap parkerized finish, 18 1/2-in. cylinder bore, 4-shell magazine for 4+1 capacity. The reason I picked it up and bought it was because all of the controls function exactly like the Remington 870 I've trained on. I try to keep things simple where I can.
Alle Kunst ist umsonst, wenn ein Engel in das Zündloch prunst.
Top

DaveC wrote:Thanks for posting the very clear and detailed "how to" videos about the Rem. 870 Synchronizor. Great stuff!

Glad you like them. I have more planned, but first I need to find a replacement for Windows MovieMaker.


DaveC wrote:Folks who like the 500 and 590 seem to think the shell elevator on the Remington is a significant detraction.

Yeah, I've heard that a lot too, but I've never really bought it. I like how the 870's carrier stays in the down position because it helps keep crap out of the action when I'm packing it through woods or brush. People will argue that having to push the carrier out of the way slows down reloading; but I see it like an automatic transmission vs. a stick-shift - it's about technique. Yes, the automatic is easier to pick up, and will always shift a fraction of a second faster, but if you take the time to practice with it, a manual transmission won't hold you back at all.


DaveC wrote:You can't see it in the photo, but there is a metal badge tacked on at the bottom of the pistol grip with the number of the squad car it was assigned to. I wrote Mr. Jenkins, the historian at Smith and Wesson, before he retired and he sent me the record that it was produced in Japan in 1983 and sold in May along with fourteen others to the PD in Pontiac, Michigan. [I collect all sorts of useless information!].

That's cool. My favorite furniture set for my 870 is an old beat-up old police riot set my parents got me as a Christmas gift. It's in decent shape and is very comfortable, but it also still has all the nicks and dings it picked up in the line of duty, as well as its old armory inventory number. I love the character it has, so I've kept it as-is.

I tried to trace it, to see what stories it might be able to tell. Unfortunately, I was only able to get as far as a dealer in Arizona who said it probably came from somewhere in the New England/New York area. I guess I'll never know for sure, but I still wonder when I feel those scars.
My YouTube Channel
Remington 870 Tips & Tricks
Shotguns 101
Top

870 18" barrel, door breach choke, extended magazine, remington LE forend, Magpul stock (I keep it wrapped, I like the extra grip and it has a better feel resting your cheek on it.) I have the 28" barrel that I keep wrapped as well for hunting.

Nothing crazy but just enough to keep it simple, functional, and effective. Has a great feel.

So a few weeks ago i purchased an old remmington 870. looked up the serial and found that it is older than i am. it's a 1979 wingmaster with the barrel cut to 18.5". when i first recieved it the safety was stuck in the off position, and it was a little (really dirty in my standards) condition. upon coming home i tore it all apart and found cosmoline on the bolt and trigger group. its weird because i figured the previous owner would have cared for it. so did a full inspection, complete cleaning, repaired the safety, and put it all back together. then i didnt like how the worn bluing looked so started to sand the reciever and finally decided to hand polish it starting at 80 grit and progressing to 3000 grit wet/dry and finally polishing paste. then i noticed the stock was cracked in multiple spots so that had to go. all in all i purchased the gun for 200 dollars and put 250 into it.


The barrel is what the bluing looked like before and the reciever is after polishing. the barrel recieved a light sanding and rustoleum camo flat black for temporary paint until i get the barrel parkerized.
Show more

this is just after the polishing job 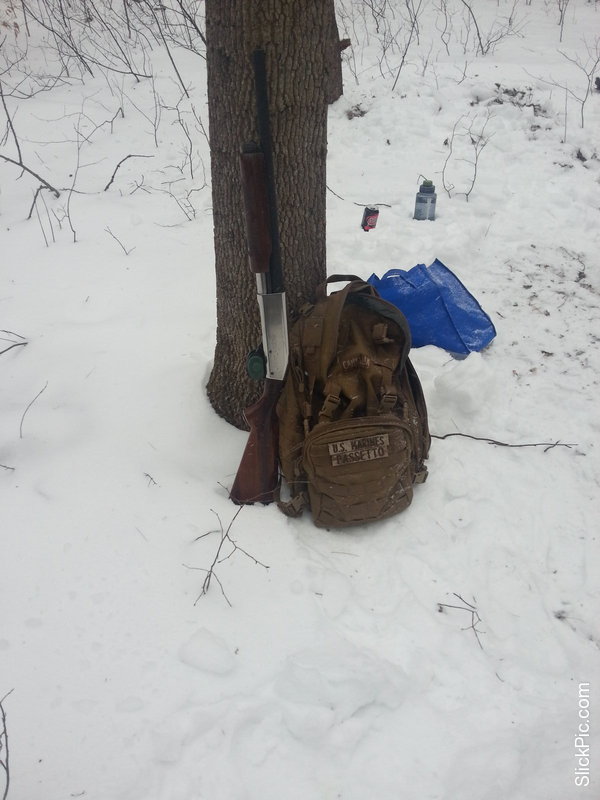 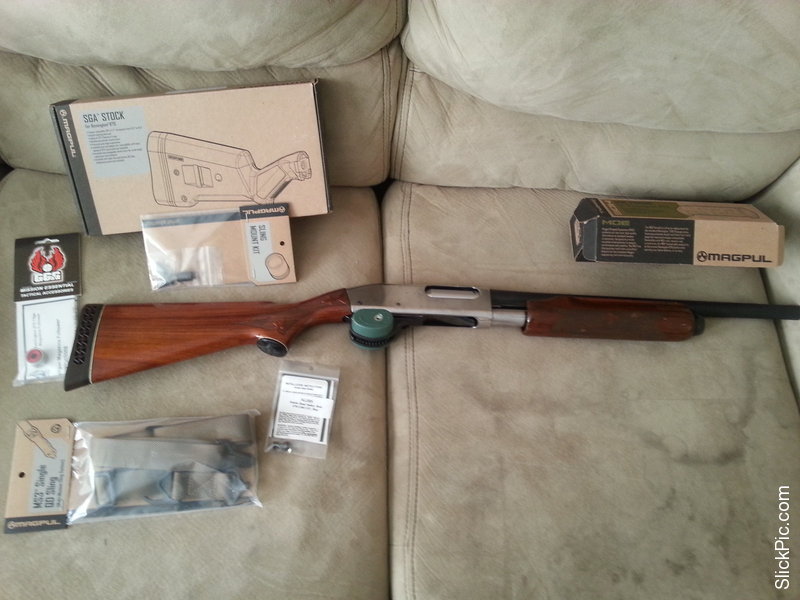 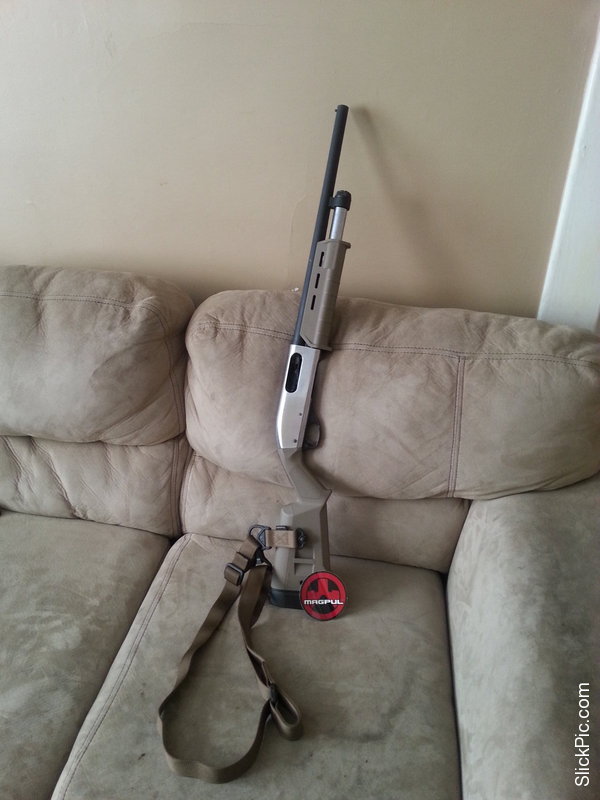 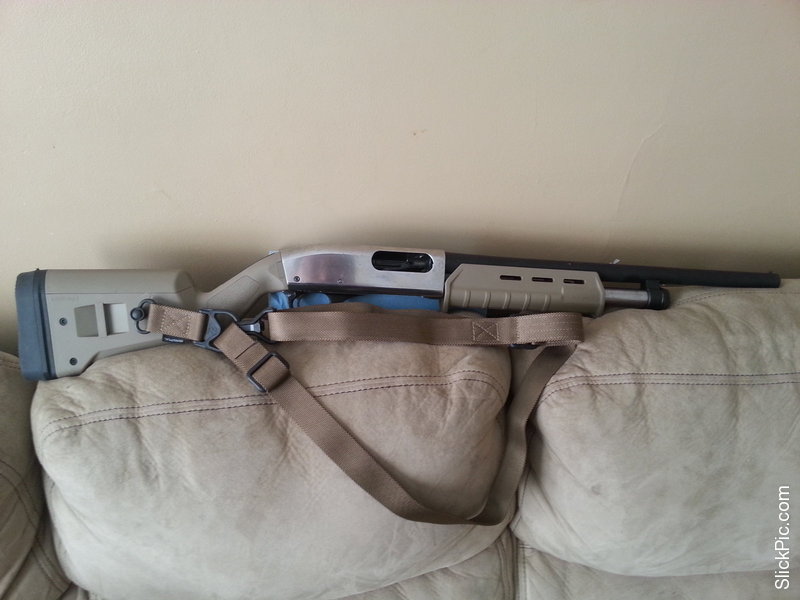 if you have any questions feel free to ask. theres a couple more things i want to do but havent finalized it yet. she shoots really accurate ( dead center of a paint can @35 yards with bead sight and 1oz slug
Top