Slug change over drills can seem somewhat elaborate depending on your weapon, and some may question why it is needed to begin with. If you do not believe in the need for a slug change over, it is unlikely you would ever master the technique. It is not typically something you do as a hunter, but would perform during the defense of your family and property. 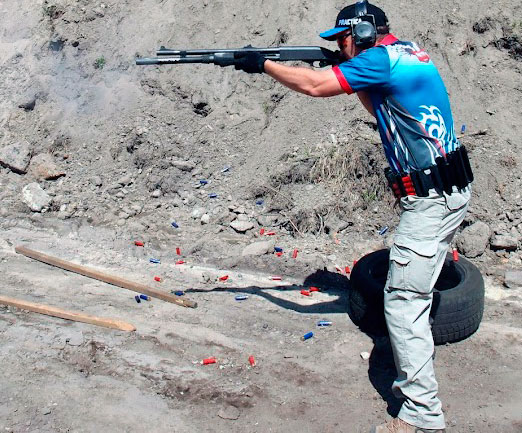 You may have birdshot loaded and the fight is now outside where you need more range out of your rounds. You have to be prepared to dump some birdshot cartridges to load some slugs. Some attempt to catch them and put them in a dump pouch. This is fine for practice but in a combat situation do not worry about dropping some birdshot.

Place the middle finger of the left hand behind the forend. Depress the action lock and open the action. The middle finger will limit the travel so the chambered round is extracted but the first round in the magazine is not released on to the shell lifter. Pick the round off the extractor or turn, dump, and replace with a slug.

Another way to perform the sequence is to hit the action release, and place your thumb into the bottom port and press against the round to reset. Move pump action back. Then hold the round forward and pull the forearm back just enough to clear the bolt making room so you can then manual load a slug (combat load as it is called by some). Now you can also load a slug into the magazine tube. Dumping out the ejection port appears to be the fastest technique.

Some shooters when they want to change over will have palmed a slug earlier and will perform the moves with the slug palmed. You are still performing the same moves but some call it “prepping” for the slug change over.

Some weapons cycle by trigger pull so sliding the bolt back does not automatically chamber a round. If this is the case, hold the release, pump back halfway and push the cartridge that is there to reset and then combat load and fire. If the round is released into the chamber from the magazine because you pulled back to far, then turn and dump the round. Some have stated this method does not work because the round will not dump. It probably depends on your weapon so practice with the weapon you use for home defense.

Some firearm classes will use “pick up weapons” to train people in combat situations to use whatever weapon is available. However, you should always practice with the weapon that will be at the ready in your home. Pick up weapons are weapons you may find on the battlefield or ones dropped by someone during a firefight, a weapon you can utilize for your own defense.

Many experts will tell you when you have fired two rounds replace two rounds. When dumping rounds to perform a slug change over put one in the magazine tube so the weapon is topped off. Never fire a weapon until empty because then you have a single fire weapon because you will have to load a cartridge one at a time if you are taking fire.