I was lucky enough to stumble upon an 870 Ex Mag and was wondering about 'Tac' ing it out. Are the 870 barrels interchangeable? Can I find a breacher barrel to swap? Basically what Im asking is, Are they as easy to accessorize as the standard 870 pump? Or am I better off using this as a bird gun. I don't hunt birds soooooo....... help me out guys. Send links too if you don't mind. Thanks guys
Top

Short answer...yes, Remington barrels are easily interchangeable. The only real variables on which barrels will work are whether it is a 3" or 3-1/2" magnum, and the location of the barrel guide ring. The receiver will be setup differently for a 3-1/2" magnum. Some of the tactical models have the barrel guide ring located farther forward for stock 6" shot mag tubes. The most common configuration with the most barrel options would be a 3" magnum, and a non-tactical model with the barrel guide ring located farther back for a 4-shot mag tube. Here is a partial list of Remington barrels from their web site; although their web site is very incomplete on all the options. I don't have the link handy for the full parts list, but somebody here will have it.

SignessSG wrote:The only real variables on which barrels will work are whether it is a 3" or 3-1/2" magnum, and the location of the barrel guide ring. The receiver will be setup differently for a 3-1/2" magnum.

Just to clarify this, standard 12ga 3" (magnum) and 3.5" (super magnum or SuperMag) barrels and receivers are interchangeable. You can put a 3"-chambered barrel on a 3.5" receiver, or a 3.5"-chambered barrel on a 3" receiver. The same goes for old barrels and receivers that are only designed to chamber/cycle 2.75" shells. All standard 12ga 870 barrels have the same critical interfacing dimensions and attach the same way. The only thing you have to be aware of when mixing & matching receiver types and chamber sizes is that you'll only get safe, reliable function with shells that both the receiver and the barrel are capable of handling.

And as far as Expresses versus other models, all 12ga 870s use the same design, are built to the same standards, and have interchangeable parts. The differences between Expresses, Wingmasters, Police models, and so on, primarily come down to the finish, furniture, & accessories they wear for their intended use. So any standard 870 can be reconfigured to be functionally identical to any other standard 870. Sometimes this takes a slight modification or two, but nothing major. The one important thing to know about if you want a multi-role 870 is the specialized 870 models that are built on receivers with nonstandard magazine tubes. These are mostly tactical or police/military models, and they can only accept special barrels built specifically for them, so they should be avoided if you want something that'll also be usable for hunting or sporting. 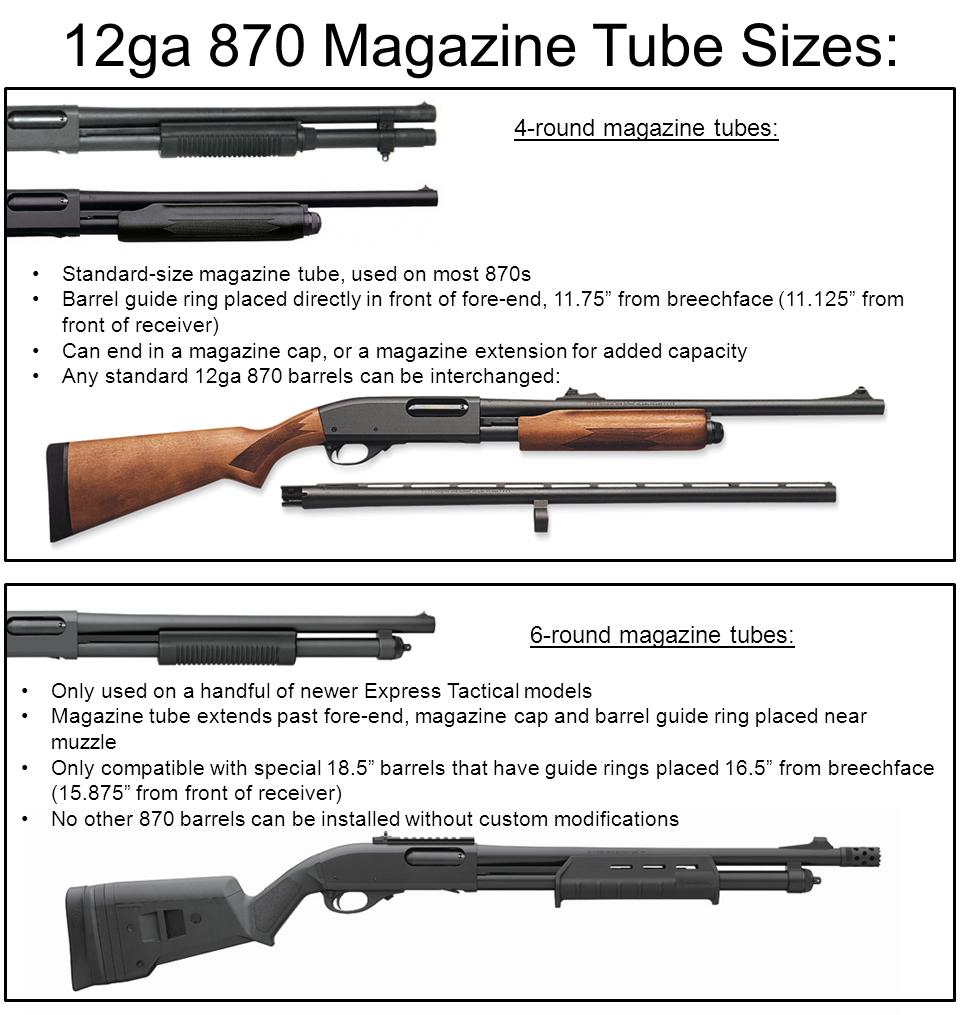 As long as your 870 has the standard 4-round base magazine tube (separate extensions don't count), you can do pretty much whatever you want with your gun.
My YouTube Channel
Remington 870 Tips & Tricks
Shotguns 101
Top

I would add that not all internal parts are the same. The police magnum has stronger parts and some made of better metal. It is upgrade over the other models in areas where it should be in life and death situations. Reason it cost more. A visit to parts list for different models will show what parts are different .
Top

Not really, the only noteworthy internal material differences between Police & Express 870s relate to the extractor and the trigger plate, and it's a stretch to call the Police versions of either stronger or superior.

The MIM extractors used in most 870s are functionally identical to the machined extractors in 870Ps, and they perform just as well. Metal Injection Molding (MIM) is far more advanced than traditional powder metallurgy techniques, and can create more detailed, less expensive parts with virtually the same properties as wrought materials. All 870s - including Police models - use some MIM parts. Based on what I've seen here, the new MIM extractors actually seem to have fewer issues than the older machined ones. As for the compressed aluminum Police trigger plates vs the polymer trigger plates used on other 870s, it's widely believed that the polymer is tougher and more impact-resistant than the powdered aluminum, though neither have exhibited any serious durability problems.

There are a few other internal differences, but nothing that really makes the Police guns objectively better. 870Ps have a different hammer pin, but that's just because they use a different trigger plate. They use heavier springs than some other 870s, but those springs aren't superior, they're just suited more for combat applications than hunting.

With the exception of the trigger plate, the component cost differences between the relevant Police and Express internals comes to a handful of dollars at the most. The primary reason 870Ps are more expensive than similarly-configured Expresses is their heavier-duty finishing and furniture. From a functional standpoint, both guns are built to the same mechanical standard, and are just as solid and reliable.

I wrote up a more detailed comparison of an 870P and 870 Express that are configured the same way.
My YouTube Channel
Remington 870 Tips & Tricks
Shotguns 101
Top

the 870 Special Field has a barrel that is unique and is not interchangeable with anything else.
The devil danced as he went down, in the hail of arrows comin' Out on the wild Montana ground, Custer died a-runnin'.
Top

But for the subject of this thread, if the gun in question is an Express, it'll have either a standard 4-round or Tactical 6-round base magazine tube. Mcdeez333 seemed to indicate that it's currently configured as a bird gun, which should mean a 4-round tube.
My YouTube Channel
Remington 870 Tips & Tricks
Shotguns 101
Top
Post Reply
7 posts • Page 1 of 1