LGS going out of business has several used MEC shotshell reloading presses. Trouble is no two look the same as far as set up of stations. They are older 600 Jr's, 12- or 20-GA. But the primer station on one is in a different spot than on the other. Are they that configurable, or has one of them been findoozled? Some parts on each seem to be missing. At $25 is it worth taking a chance on one, or will replacing enough parts soon make it uneconomical compared to new-in-box unit?
Retired USN
NRA Life ; NAHC Life
Pain heals, chicks dig scars.....glory -- lasts forever!
Top

I'm not an expert on these, but from what I understand there are three generations to the MEC 600 Jr presses. There are the pre-'82s, the '82 - '85s, and the current Mark 5 version. The base, the wad guide, and the crimp starters are some easy things to look at to determine what generation the press is. A lot of the other parts are the same or similar though, and (as far as I know) the versions are all laid out the same with the various stations in the same places. 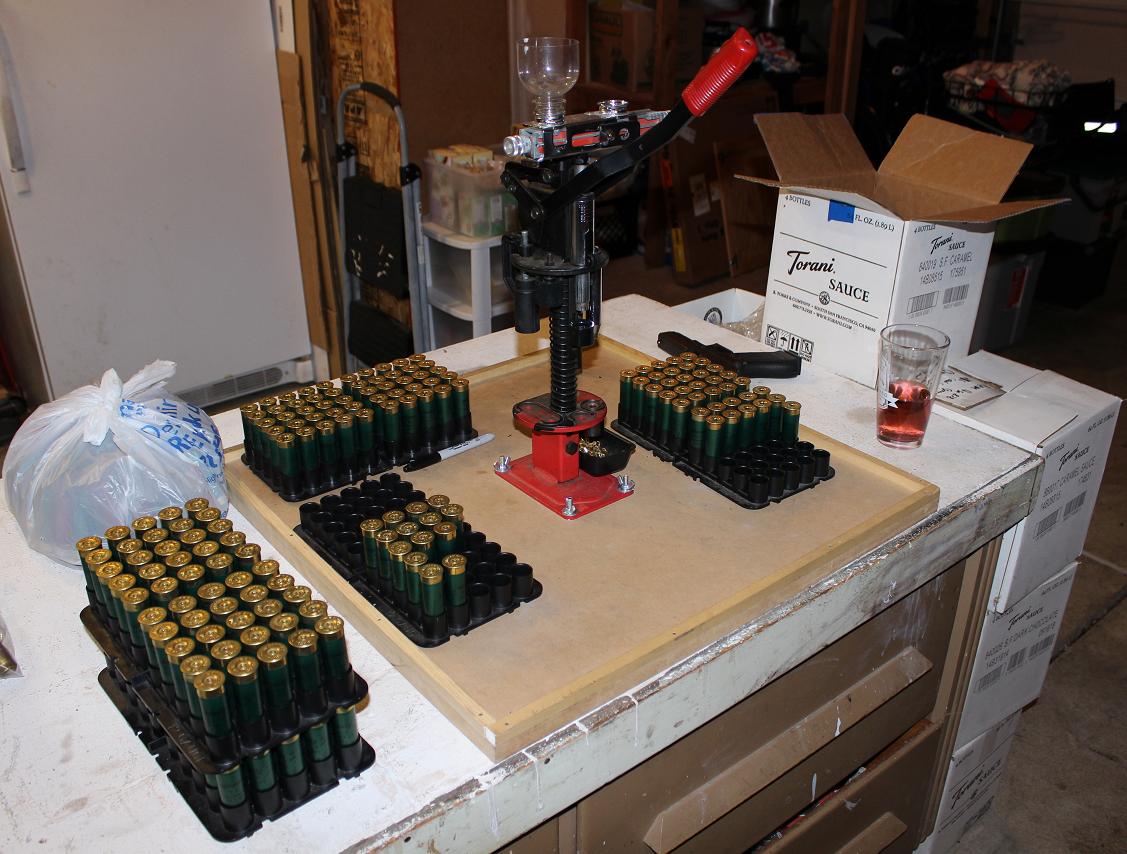 The 600 Jrs are great presses, they're really solid and easy to use, and parts and add-ons are widely available. Nothing in these presses is cheap or easily-breakable, and if anything does break, it's easy to replace. Even the older versions are good presses, and an older press can be upgraded with improved modern parts like the nifty Spindex crimp starters if you'd like. MEC still supports the older presses though, which is really cool of them. Look through the parts lists I linked, and see what it would take to get one running.
My YouTube Channel
Remington 870 Tips & Tricks
Shotguns 101
Top

Thanks for the info. I'd have to hold one of the presses up against those parts diagrams to tell which-is-which. I may grab one of the nicer 12-GA units, and then slowly rebuild it. Is there any other method to tell which era/model-series they are? They have nameplates, but not much info is provided on them.
Retired USN
NRA Life ; NAHC Life
Pain heals, chicks dig scars.....glory -- lasts forever!
Top

Okay, picked this up today in 12-GA. It does not say "Mark V" on the data plate, so I guess it's one of the older models. How can I tell which? Appears to be missing some parts, like the primer-seater assembly. Nothing that can't be replaced. Or if I like it and get a new one, this can be used for parts. 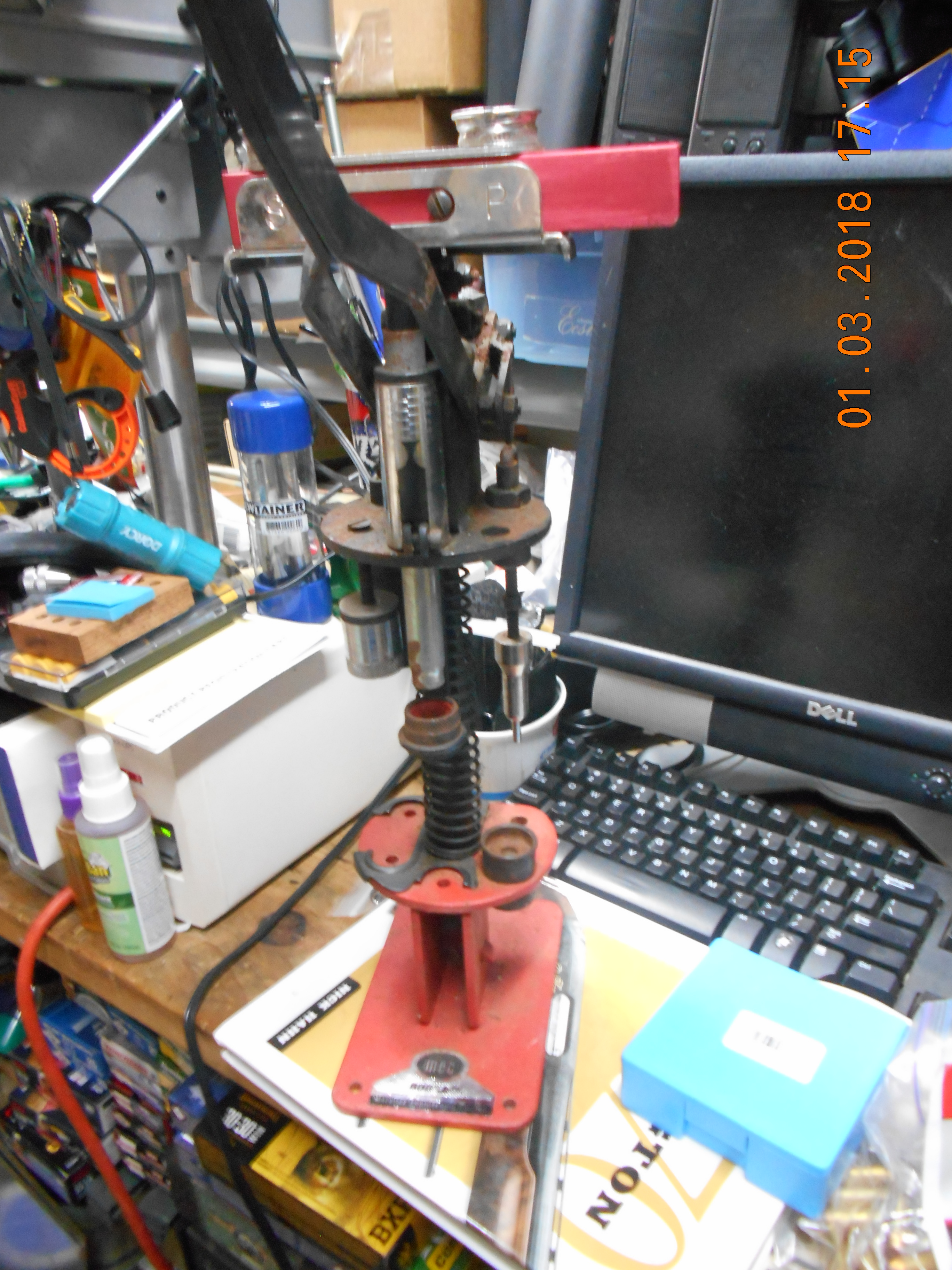 That's a pre-82. You can tell by the open-forward base with the column bolt in the back (newer generations have that flipped-around), and the old-style wad guide with the bent bracket & 2-piece metal wad guide assembly ('82-'85 & Mark 5 versions have a straight wad guide bracket and one-piece plastic wad guides).

As I said, MEC does support these older presses, so you can get parts. Refer to the pages I linked above to build your shopping list. Could be worth talking to them about which Mark 5 parts can be used on your older press. If you're replacing parts anyway, you might as well put the improved new stuff on there where you can.
My YouTube Channel
Remington 870 Tips & Tricks
Shotguns 101
Top

Thanks. I think by late in the evening that I had also come to the "pre-1982" conclusion. Still it seems that the model series has been incremental improvements, not wholesale changer-ooo's that make significant differences. There's a bit of rust, but nothing a wire-brush and some rattlecan paint won't cure. It'll be a nice slow rebuild, nothing I have to have done overnight....but these projects take on a life of their own sometimes.
Retired USN
NRA Life ; NAHC Life
Pain heals, chicks dig scars.....glory -- lasts forever!
Top

Okay, as far as "slow" rebuilds go, the first set of MEC parts got ordered and they shipped the same day. I'm not a very patient project guy, sometimes. My 600 Jr is missing the re-prime assembly, so that got ordered plus a new drop tube (old plastic gets brittle). MEC was very fast on the order. I was also able to pick up a more realistic charge bar from the LGS that I bought the press. He has stacks of them, mostly in non-useful drops. I needed a 1, 114 and 118 -- got the 114. The press came with a charge bar but its only a 12 (1/2 oz of shot by volume). And the powder bushing is #29, but who knows what powder charge I'll be using yet.

Just getting started in all this, ya know.... Been shooting and reloading metallic cartridges for 30 years, and always scoffed at scattergun folks. Now I are one.
Retired USN
NRA Life ; NAHC Life
Pain heals, chicks dig scars.....glory -- lasts forever!
Top

You can also get a universal charge bar for that press, which has dial-adjustment cavities for both powder and shot. Nice for making small adjustments to compensate for the density & packing differences of various shot sizes and alloys, plus it's obviously all charge bars & bushings in one unit.
My YouTube Channel
Remington 870 Tips & Tricks
Shotguns 101
Top

A point I will make is the superb nature of MEC's customer service. I was e-mailing with MEC Customer Service today with a lot of questions about the parts and the re-build, and he was responding to me faster than the folks I supervise at work. Excellent. Got me all set up and listed what parts I could use but didn't need. Told me where to save money, and where not to.

In fact, he jazzed me to the point that I went back to the LGS-going-out-of-business sale and picked up a second 600 Jr (pre-82') in almost mint condition in 20-GA. It is almost complete, and missing very few parts. Plus it turns out I can buy the gauge conversion kit cheaper than all the parts that I need, so that option is there too if I want to be able to do a 3rd gauge like .410. And they are fast on orders. A company well worth supporting!

Got the last of the "necessary" parts in last night, and now I have two functioning MEC 600 Jrs, one 12-GA and one 20-GA. Grand total cost of $50 in parts and $25@ for the presses, so for $100 I have two shot shell presses. Remarkably easy to adjust and some of the new parts are upgrades, and some are just new parts. Again, MEC customer service has been superb, as well as the help on this forum (thanks Synchronizer!). Now comes the hard part, deciding what target, what to reload on my spent shells and for what purpose, which load, etc.
Retired USN
NRA Life ; NAHC Life
Pain heals, chicks dig scars.....glory -- lasts forever!
Top
Post Reply
17 posts