I recently finished building my second 870 and did a quick pattern test with it using a bunch of LE127 00 that I had on hand. I was discouraged by the results, which prompted me to head back out and pattern test both shotguns with a small variety of ammo on hand.
-------------------

I used two guns for testing. A bit older Remington 870 Express (maybe 2007 or so) and a 2017 Remington 870P. Both guns have Remington factory barrels that were purchased directly from Vang Comp and both have Vang Comp's VCS treatment with ports. They are marked "IMP CYL" for fixed chokes. 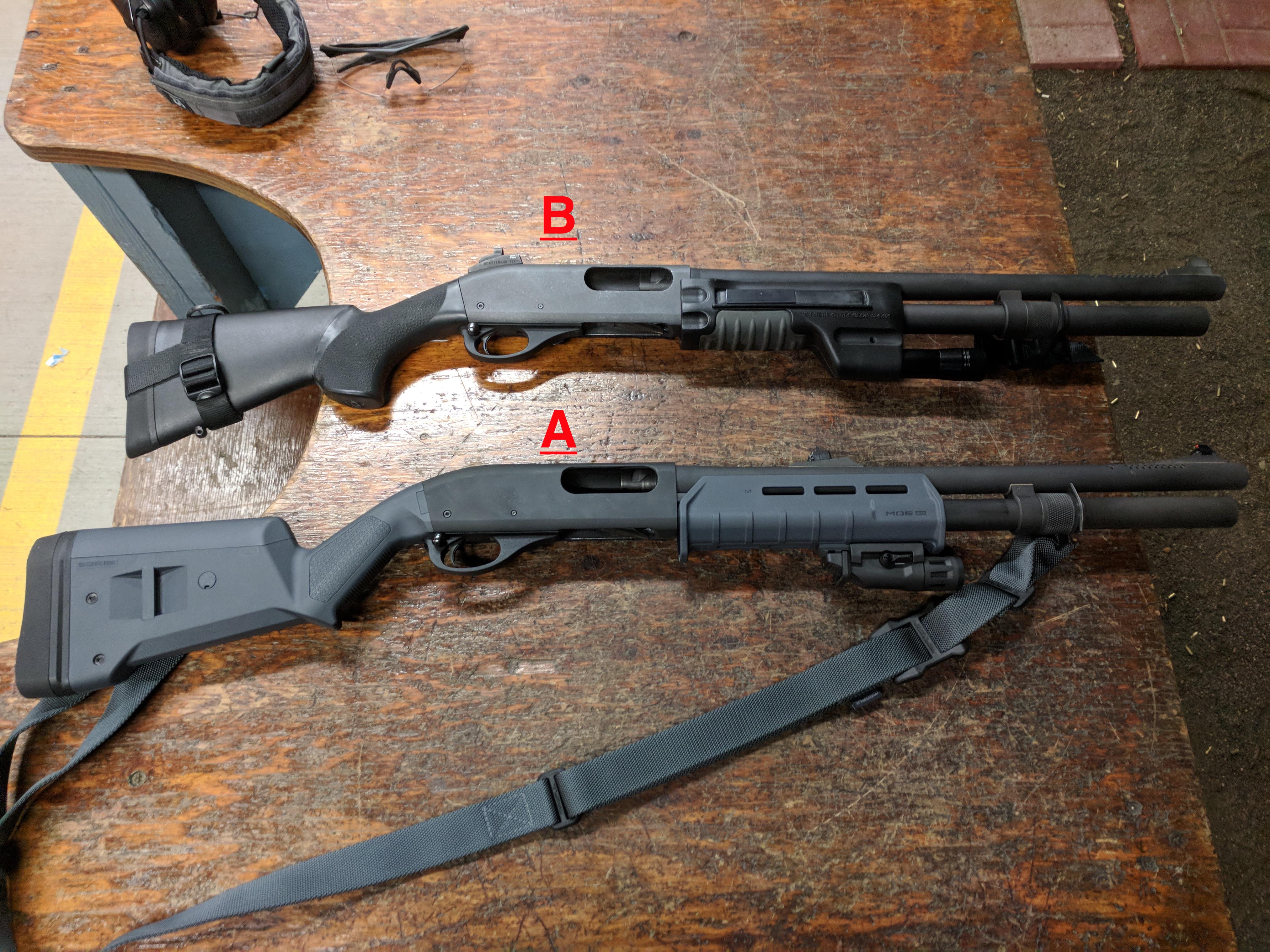 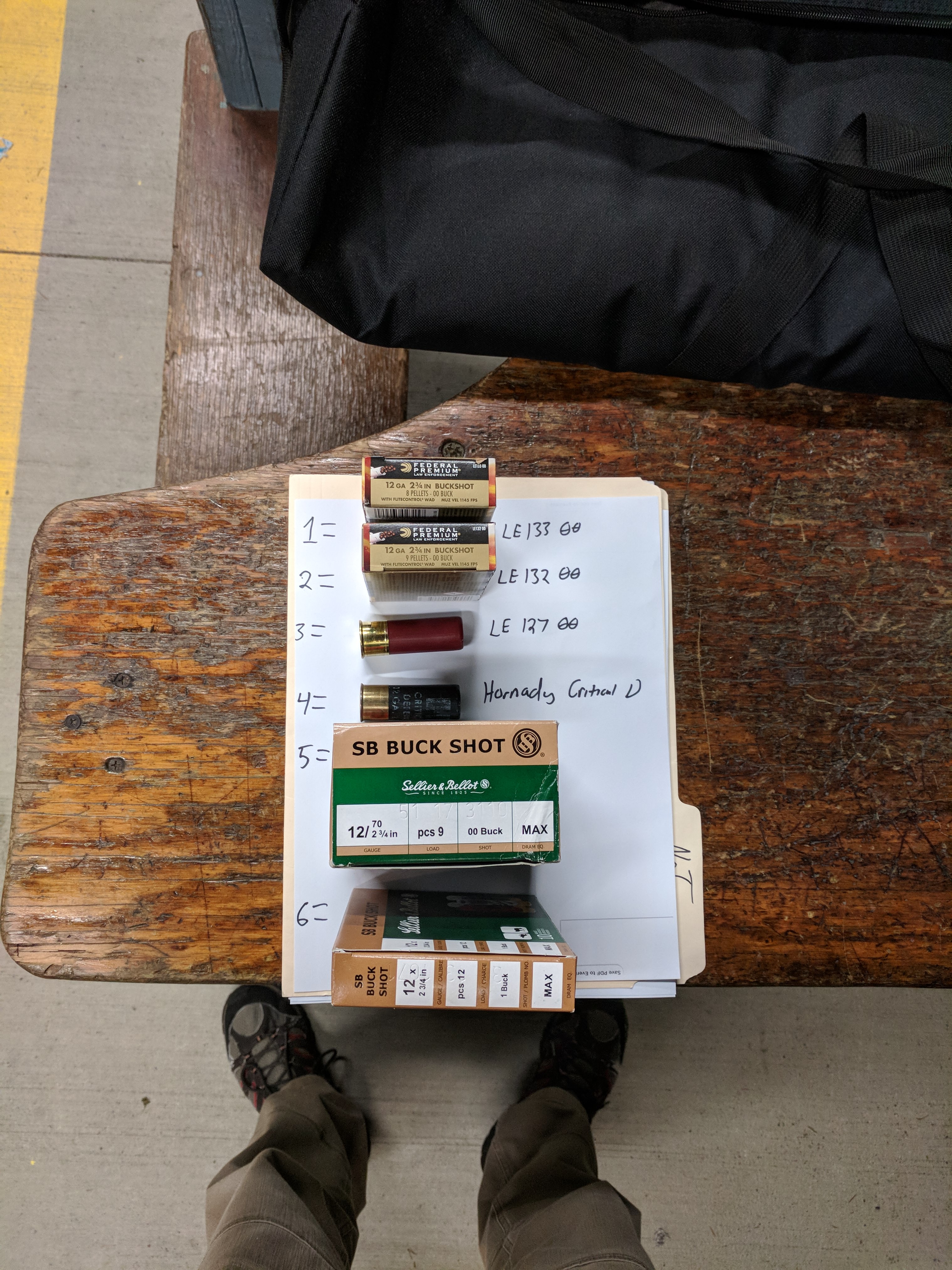 Target distance was 25yd. One round was fired at each 3" shoot-n-c sticker and then after the initial outline, a second round was fired from each at the same spot save for #5 & #6 (S&B) as it was bad enough I didn't see a point in cluttering it up. 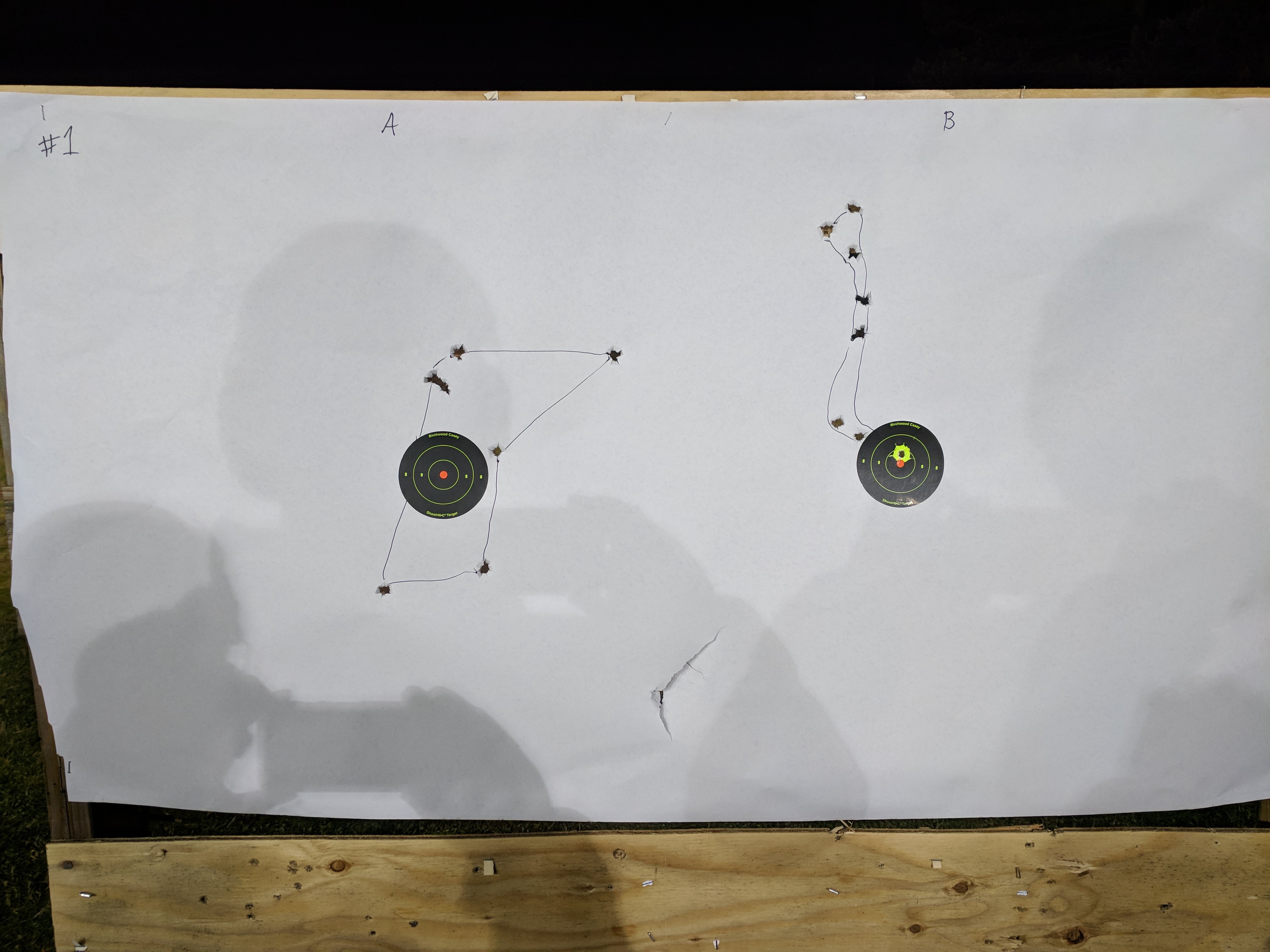 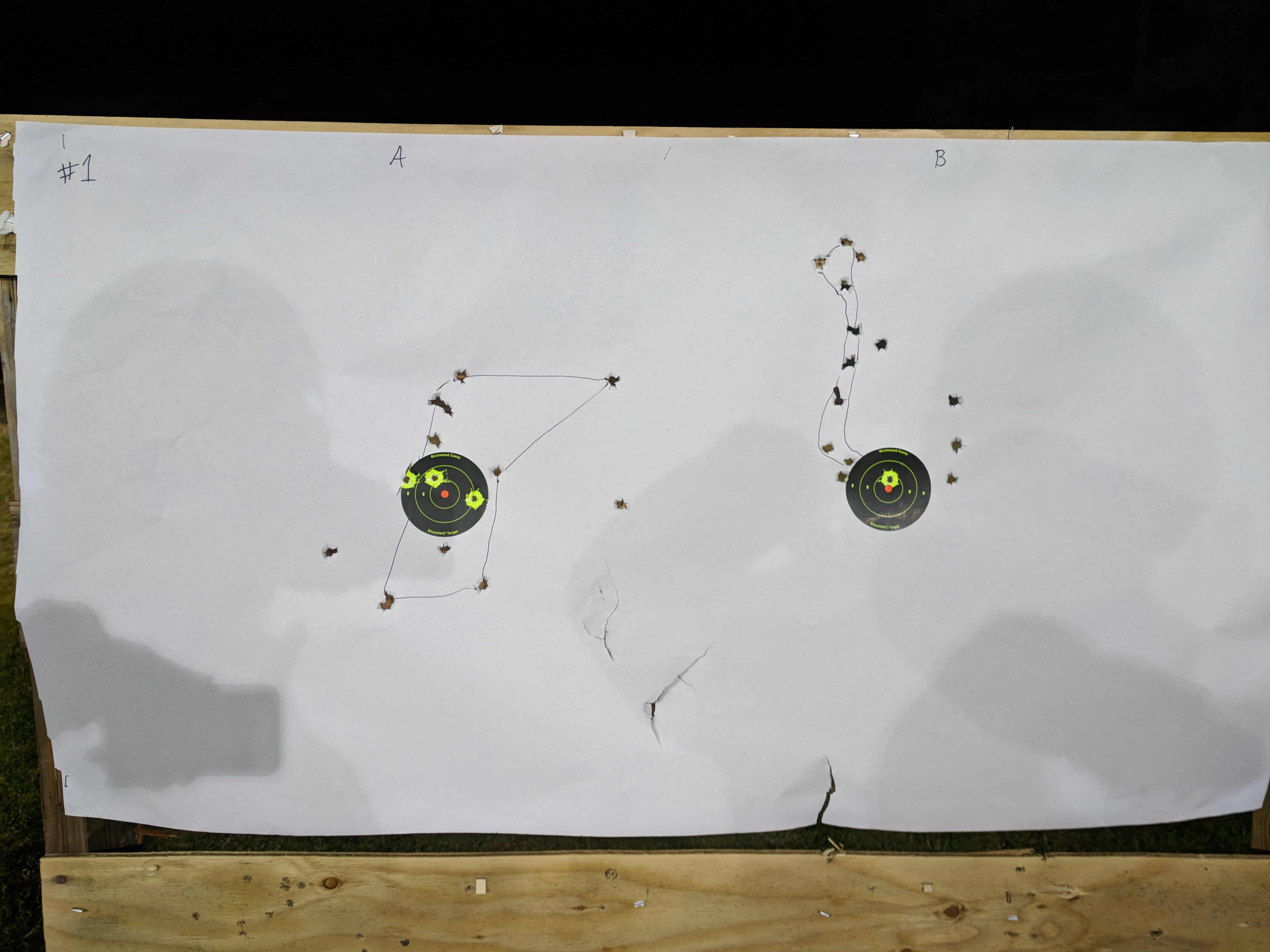 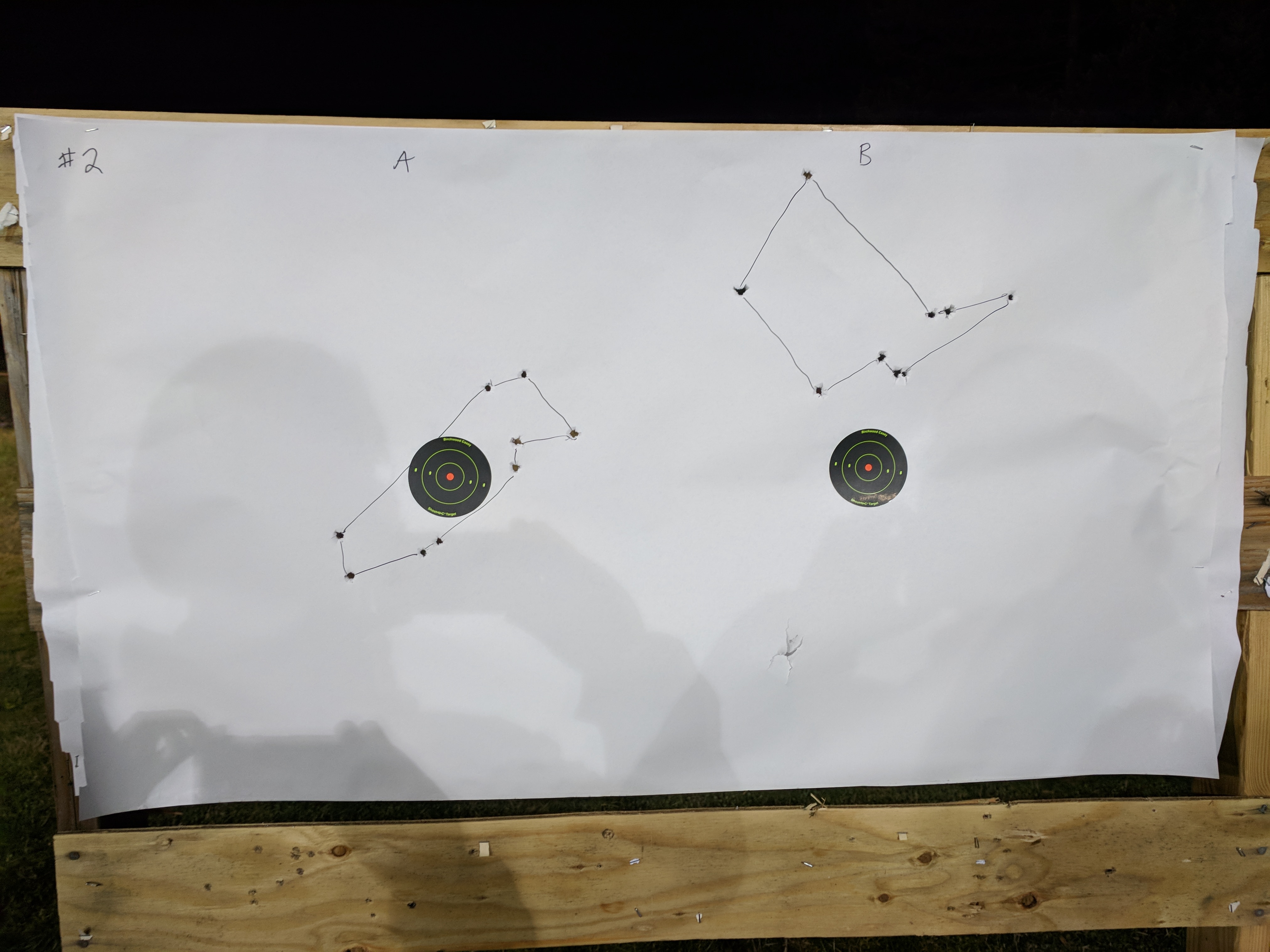 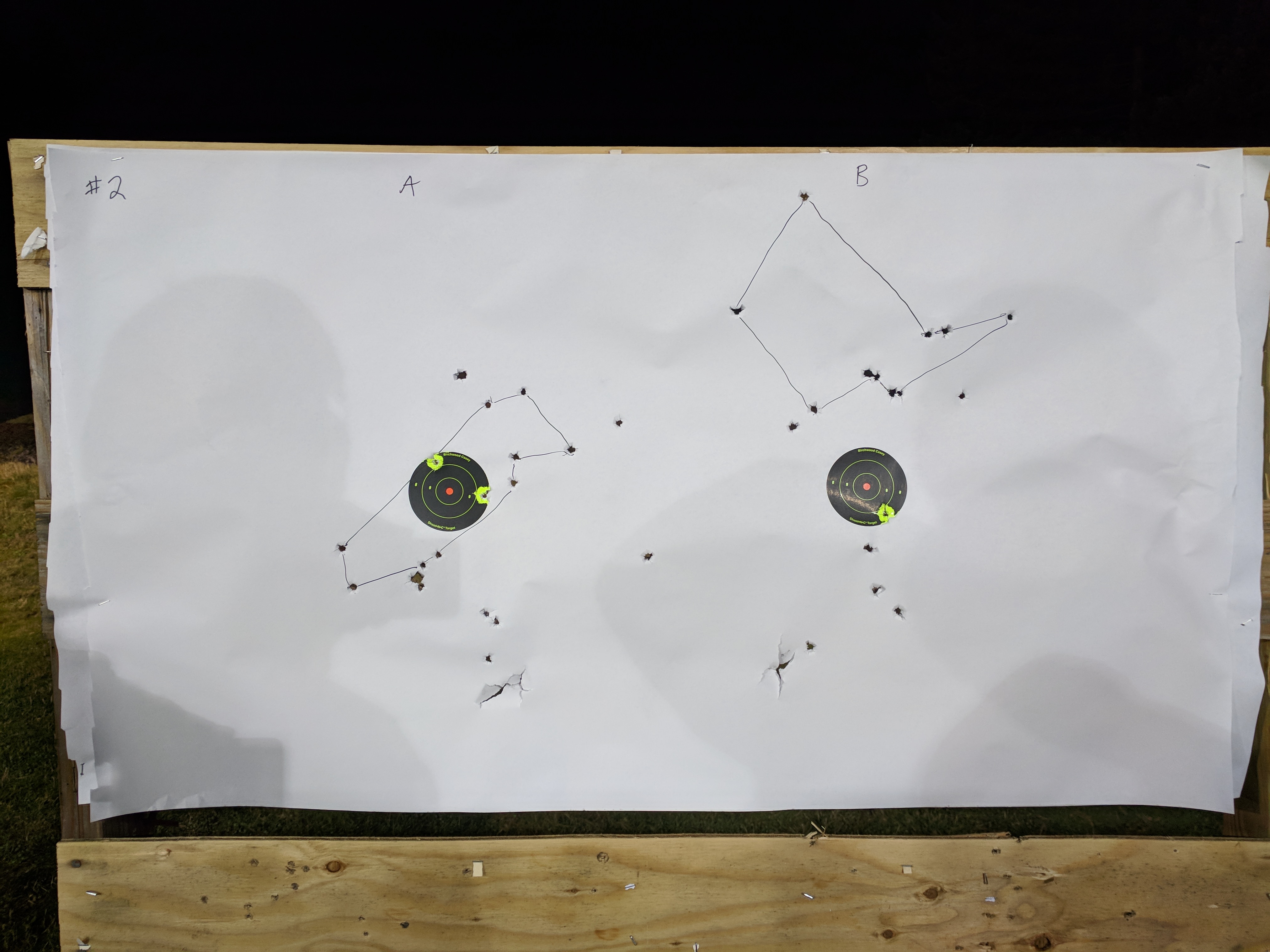 #3
I goofed and only took a picture of A's first round. B's first and second round are mixed in together in the following photo 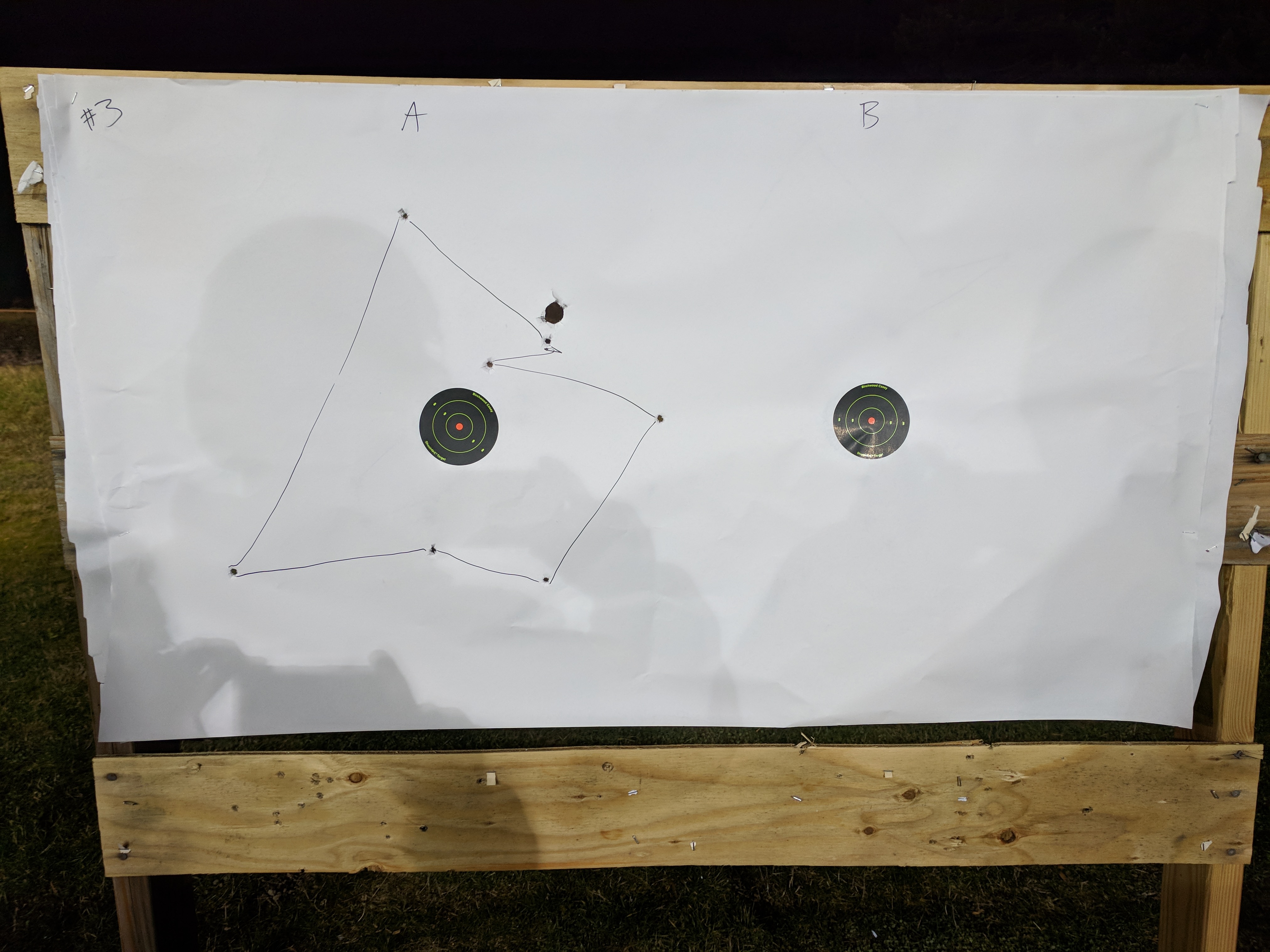 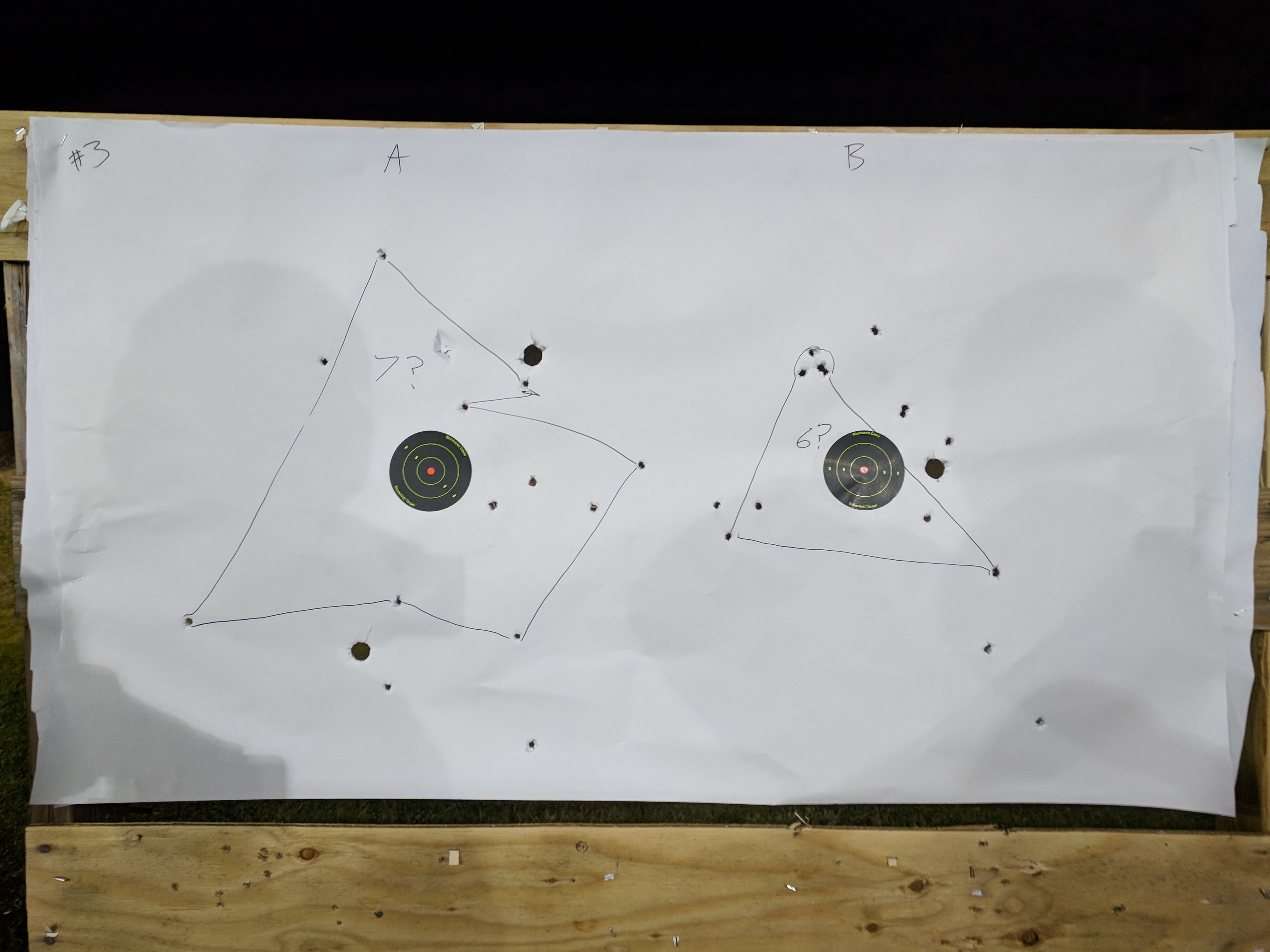 You'll notice I wrote "7?" and "6?" inside the first round outlines. This is because those were all the pellets I could find...where did they go? 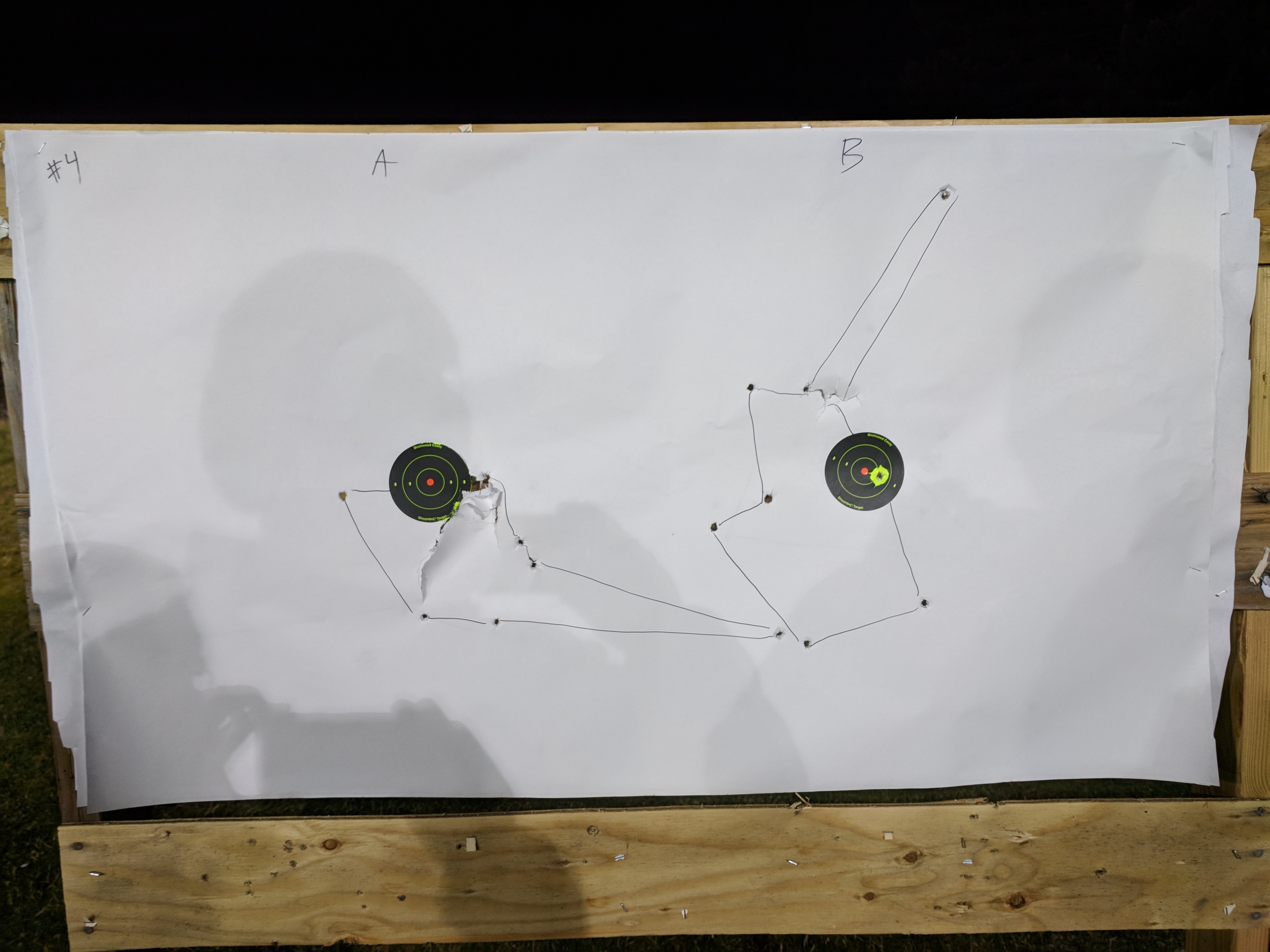 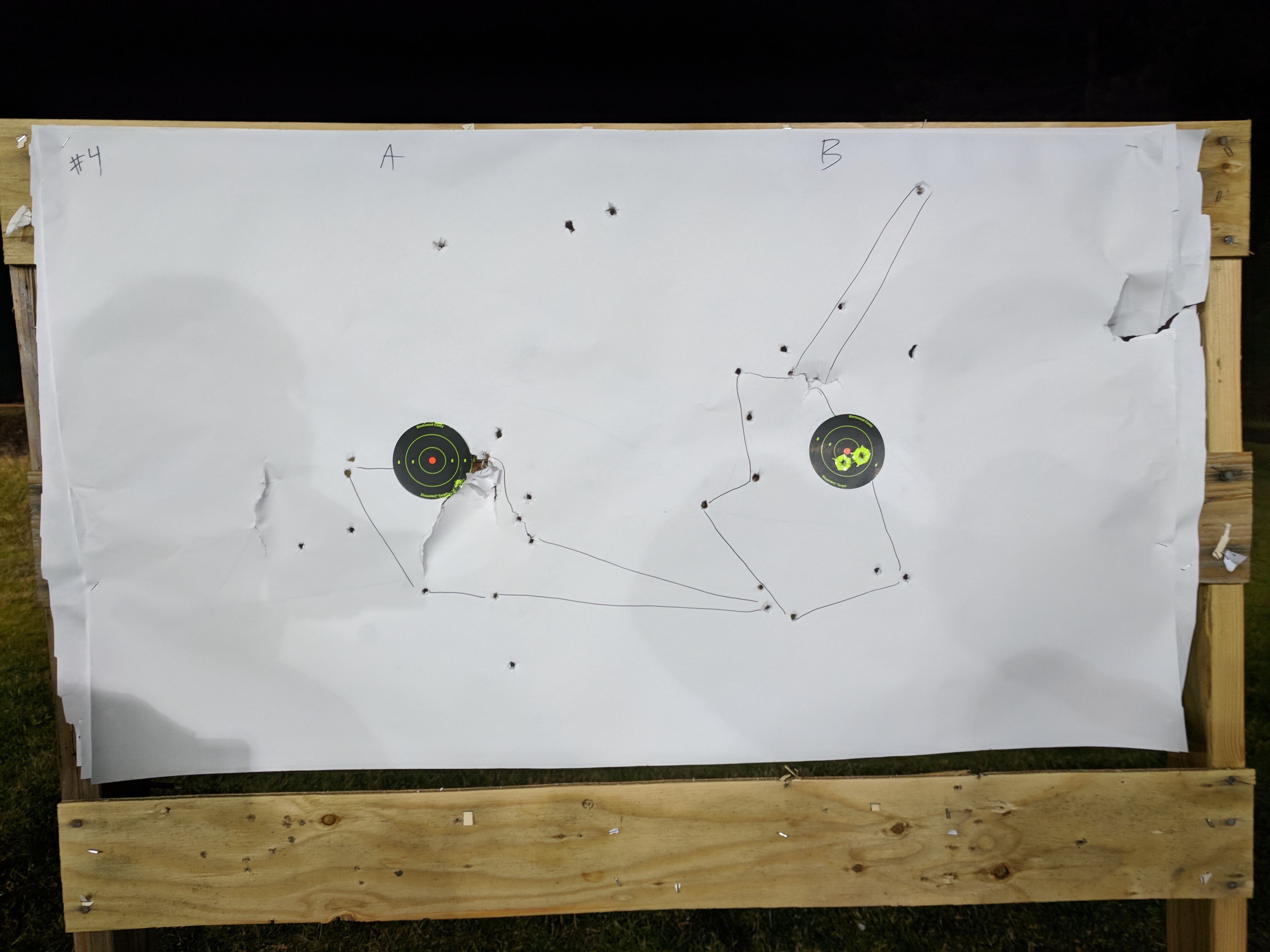 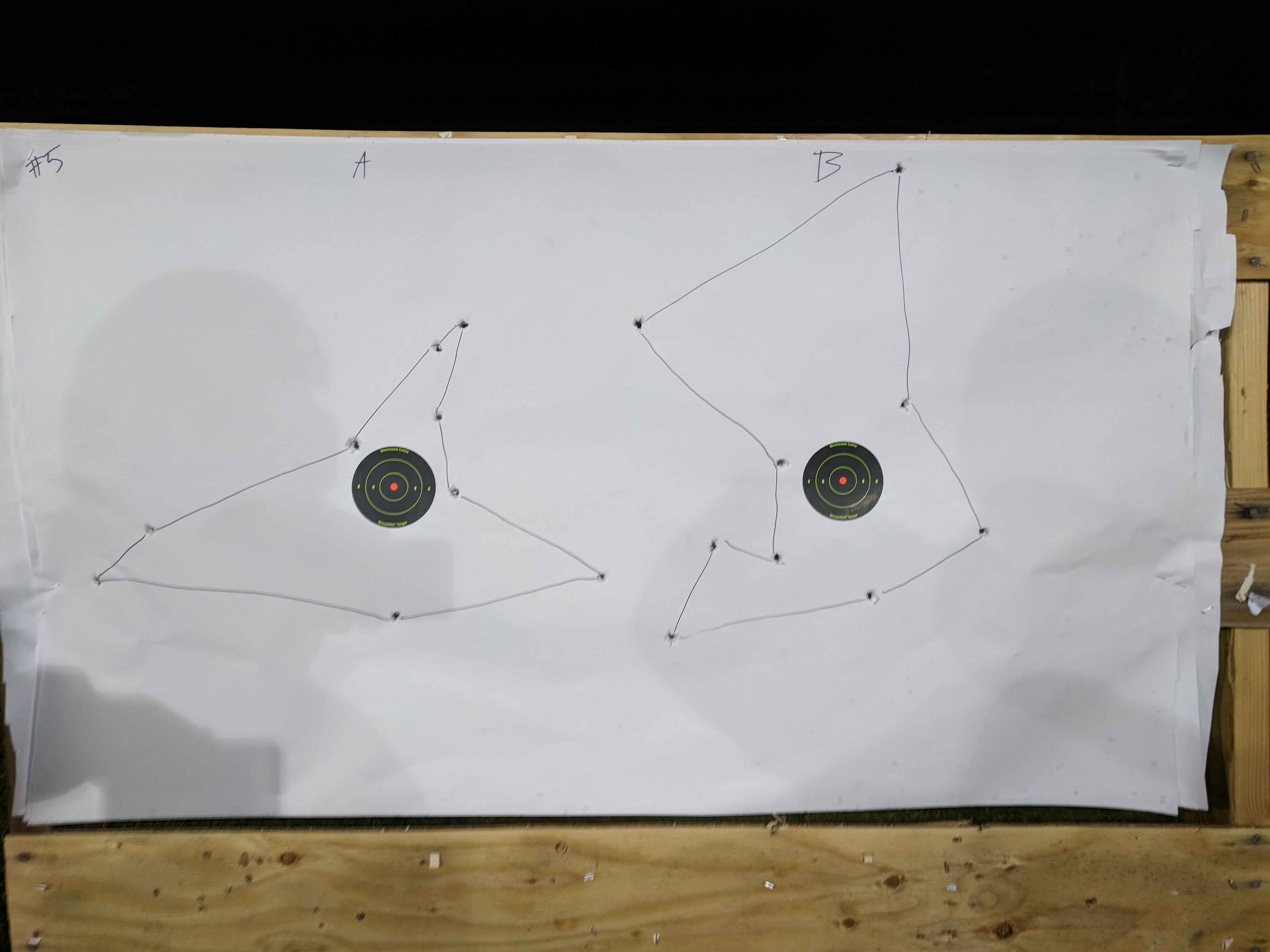 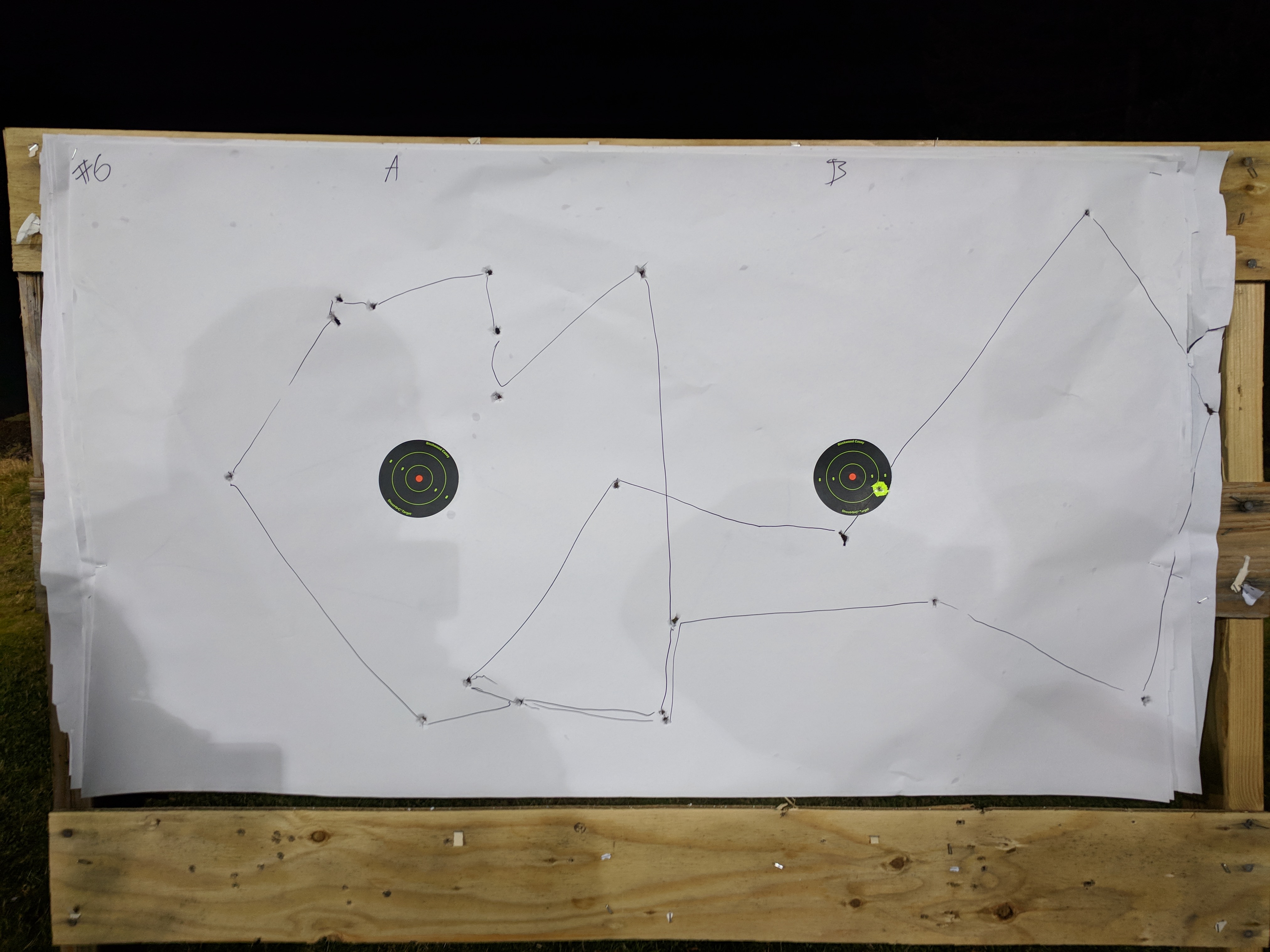 In the end I confirmed for myself that my new shotgun (A) isn't really any worse than my old shotgun (B). Whatever my memory was of shredding fist sized holes at 25yds with "B" was obviously erroneous. But I did learn that not only is low-recoil ammo more fun to shoot, but it patterns tighter as well. Something to keep in mind.

Remember to pattern your shotgun(s) with your given choice of ammo. I was limited to only testing at 25yds at my range, but it would be beneficial to check 10yds and 15yds as well if you have the opportunity.
Top

I too load my defensive shells to "low brass" velocities. Most of mine are kept at or under 1200 fps. For slugs or buckshot and I have proof that it works too.

But for typical HD/SD distances that I use them, is more than adequate. In reality, adding a few hundred fps velocity is going to gain me nothing except more punishment on my end and more recoil to have to fight with if a fast followup shot is needed. And I have even shot deer at nearly 50 yards with one of my low velocity slug loads made from wheel weights into a 1 oz. Lee mold and had near complete pass through.

Not side to side pass through mind you, but end to end. The entire length of the deer from it's hind quarters to the base of its' neck.

I've been an advocate of using "low recoil", "low brass", "managed recoil" or whatever you want to call it for as long as I can remember.

A really old saying for shotgun shells dating back to before smokeless powders were widely available still rings true today.

But I applaud you for patterning your guns with various shells. That's more than optional. It's required business.

Try shooting some slugs out of those guns next and see where you're at. I have no doubt that you will find a combination that excels in those guns.
When people ignorant of guns make gun laws, you have ignorant gun laws.
-John A.
Top

Good stuff, thanks for sharing. It's pretty well-known that in addition to reducing recoil, lower velocity also tends to mean less pellet deformation, which results in better patterning.

Would have been interesting to see how patterns compared before the barrels were worked on.

Which of these loads were buffered and/or plated?
My YouTube Channel
Remington 870 Tips & Tricks
Shotguns 101
Top

Synchronizor wrote: ↑
Sun Jan 07, 2018 10:02 pm
Would have been interesting to see how patterns compared before the barrels were worked on.

Which of these loads were buffered and/or plated?

Yeah unfortunately i like the VCS enough that I did it before I even shot the 870p. I've still got a 12ga itch pretty bad and am tempted to pick up yet another shotgun.

I believe that the 3 Federal loads are all buffered and copper plated. Unsure about the hornady load. The S&B loads are niether AND don't have a shotcup.
Top

Yeah, I have some 3" S&B 00 buckshot shells in my collection, and they're super rudimentary. Not even a plastic gas seal, just a simple over-powder card and what appears to be a fiber spacer wad under the pellets, then a flimsy overshot card on top. I really only bought them because their shallow roll crimps make them fairly long for unfired 3" shells, so they're useful for testing magazine capacities. I have yet to fire one.
My YouTube Channel
Remington 870 Tips & Tricks
Shotguns 101
Top

Those fiber felt wads will perform just fine if you were to try to shoot one.

Shotshells don't necessarily need a shot cup. Those S*B may even surprise you.

When people ignorant of guns make gun laws, you have ignorant gun laws.
-John A.
Top

I'm sure they shoot fine, but that wad column is still something you'd see in an ammo catalog from the 1930s. They're really more useful to me as a testing tool; while 15-pellet 00B is a great hunting & woods defense load, I prefer the Remington version of that load, which uses modern wads and buffering, plus a shorter crimped length and water-resistant crimp sealant.
My YouTube Channel
Remington 870 Tips & Tricks
Shotguns 101
Top

For myself I determined that this round is useless for hunting ....

The following is the pattern at 20 yards (meters) with a fixed IC choke. 9 Pellets 00 Buck.
And non of the pellets hit the boiler room .... 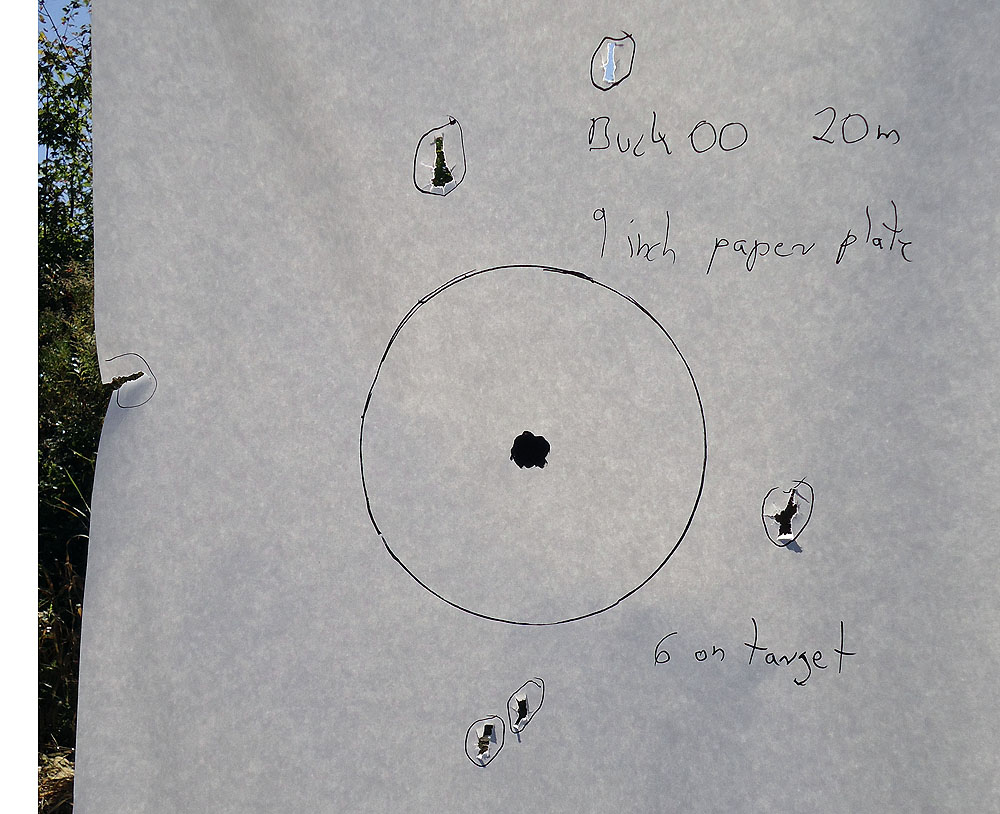 However, if you are looking for a spreader round .... this round might be it.
Top
Post Reply
12 posts