To start off with, I already had/have a Remington 870 Express that I got almost a decade ago. I came to the Remington after quite a bit of time on a Mossberg and ultimately I decided I liked the remington control layout better.
This thing went through quite a few iterations but it ultimately landed here: The biggest things I learned from this shotgun were that I liked a 12" LoP stock, and the Vang Comp VCS treatment and Big Dome safety were mandatory items for me.

I like the shotgun a lot, but i'm kind of in to having duplicates right now and I decided I wanted to 'start over' with an 870P and get specifically what I wanted from the get go.
I ordered a brand new 870P with rifle sights and factory +2 extension. Before I even shot it I sent the barrel to Vang Comp for their VCS treatment. While in transit they got a handful of factory Remington barrels with the rare "DEA" XS sights. More commonly found on factory 14" SBS barrels. I worked it out with Vang Comp and I got one of those DEA barrels in place of my factory barrel.
Added the VC big dome safety, steel follower, and +2 extension and it was starting to feel like home. Yesterday my Magpul stock and forend came in and wow, for how unattractive this stock is it sure is comfortable. This gun doesn't disappoint. I've got a spare vtac sling on it at home, but I plan on ordering a BFG sling and ultimately an inforce WML for the handguard.

Has anyone ever tried putting an Inforce WML on the bottom of the MOE handguard?
Top

Very, very nice. I've always thought those super low-profile sights looked great. I have Ameriglo sights on my factory rifle sight bases. They're pretty tall and it's not the fastest sight picture, either. I wonder if I could grab one of those barrels or the sights at some point.
Let us speak courteously, deal fairly, and keep ourselves armed and ready. - T.R.
Top

I'd make sure you put in plenty of range testing with that Vang Comp extension. I tested the VC +2 kit awhile back, and found that the steel follower had a tendency to hang up at the tube joint, and that the spring lost its stiffness really quickly with use. If your spring starts getting weak, or your follower shows function issues, let me know; I have a bunch of different springs & followers lying around, and I can see if I can come up with a different setup that runs well in that extension. 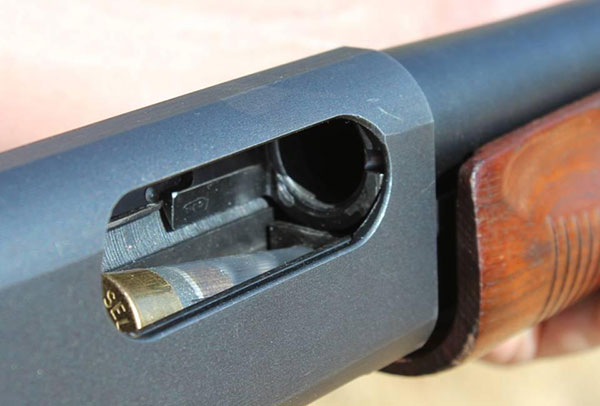 Thanks for the response Synchronizor.

I had one experience years ago on my other 870 running the same extension, follower, and spring. I was shooting and then click, went to feed it and found that there were rounds in the tube, just no spring pressure. Follower had jammed somewhere in the tube. Slammed the stock on my thigh and cleared it, but after that I went out and bought a Wolff XP spring and it hasn't happened since.

On the new gun (posted above) however, I did go to load it the other night and when I tried to put the 6th round in I hit resistance that I believe was the followed hanging up at the seem. I unloaded 1 round, repeated the load and it completed without error.
But, as you say I need to go shoot it more.
Top

Yeah, sounds like the same issue I had with the follower in my VC +2.
My YouTube Channel
Remington 870 Tips & Tricks
Shotguns 101
Top
Post Reply
5 posts • Page 1 of 1