So I recently bought a new youth model 20 gauge express. Man this is really a handy lighter great shotgun. With the 21" remchoke barrel and the compact stock it is the same length as my 12 gauge 870 with 20" barrel, but noticeably lighter. Very handy. It came with the Mod choke and I bought an IC choke for HD. It's for my daughter who is moving out and will be living alone renting a house in a rural area. She handles a shotgun well. It patterns Remington and Winchester #3 buck very well.

I am very happy with this express. This is my first express. I've got 2 older 12 gauge wingmasters and an older 870SP magnum turkey gun. I was a little concerned after all the bad press the express had been getting over the the past several years. The new dark wood looks much better than the laminated. Also, I have been witness to 2 different 12 gauge expresses FTE. These were friends' guns and both had rough spots in the chamber. The chamber in this new youth model is as smooth as all 3 of my older 870s. If this gun is any indication hopefully Remington is producing a better product now.

Now for my question. This new 20 gauge 870 does not have the flex-tab in the shell lifter. So I wonder if the "shell under bolt" jam can be cleared in the 20 gauge without the flex-tab? Or is this gun vulnerable to that kind of failure? The bottom of the bolt face is relieved somewhat. Maybe I'll make it jam and see if it can be cleared by pumping it.

Dan, very interesting question. I don't have much experience with 20 gauge Remington 870 but I hope that one of the members can help you with that.
http://www.Rem870.com - Blog about the Remington 870 Shotgun
Top

Vitaly, thanks for responding!
So the other day I decided to test it at the range. With the action closed, I put a round in the magazine, then I took a small screwdriver and pushed the right-side shell latch back far enough to release the shell into the receiver under the closed bolt. I was then able to cycle the action fine and the shell loaded into the chamber no problem. I felt no resistance at all. It was just like cycling a round from the magazine. I did this 4 times and it worked fine every time. After I left I realized that I should have tried it with multiple rounds in the magazine. I'll try that this weekend.

The flex-tab fix was for the 12ga 870s, which had demonstrated jams in hard-use applications when a shell slipped between the carrier & slide assembly. The carriers on 20ga guns didn't receive the U-shaped cut-out to make the flex tab. However, The changes to the carrier were only part of the fix; the 12ga breech bolts & slide assemblies were also modified to easily clear shell rims. I wouldn't be surprised if the 20ga bolt and/or slide assembly received similar tweaks, even if the carrier wasn't altered. You mentioned the bottom of the bolt was relieved, is it anything like the new-style 12ga bolt shown here? 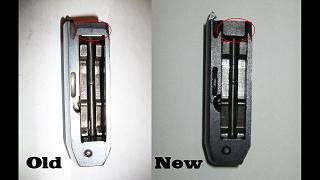